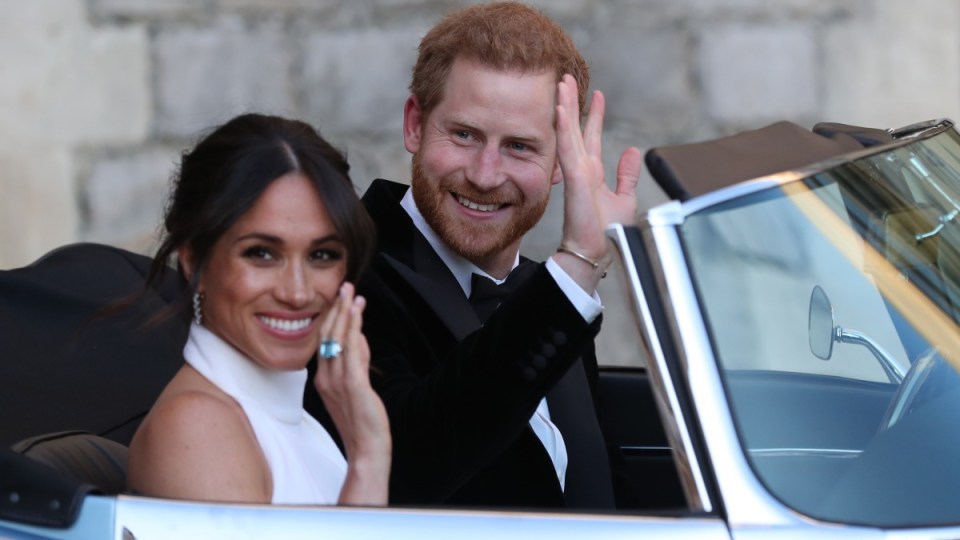 Meghan and Harry, in their reception outfits, heading to the party in a Jaguar E-Type Concept Zero. Photo: Getty

Prince Harry was clearly nervous before his bride arrived at St George’s Chapel on May 19.

He continually touched his face, tried and failed to respond to his brother Prince William’s small talk, and kept looking skywards. When Meghan Markle was finally walking towards him, Harry’s relief was obvious.

Amid an event which was choreographed to the second and run with military precision, the bride and groom found plenty of personal moments: they held hands throughout the multi-cultural service, laughed and didn’t lose eye contact.

Meghan was due at church at 11.59am on Saturday May 19, and she stepped out of her car bang on time. At two minutes past noon, she entered the church in her last moments as a single woman, smiling under her veil, supremely confident.

Behind her was her 10-strong gaggle of small pageboys and bridesmaids, including Prince George, 4, and Princess Charlotte, 3. Carrying a small bouquet – some of the flowers reportedly handpicked by Harry – Meghan met Prince Charles halfway down the aisle and took his arm.

Just before he handed his almost daughter-in-law to his son, Charles said something to Meghan that had her smile quickly. Harry had a few quick words to his dad: “Thank you, Pa”.

Then Harry, 33, and Meghan, 36, were in front of each other, exchanging smiles.

The couple linked hands immediately as the Dean of Windsor told the congregation they had come together to “witness the marriage of Henry Charles Albert David and Rachel Meghan”, who were to be “united with one another in heart, body and mind”.

Harry, seemingly more nervous than his bride, fiddled with his belt as the Dean spoke, then pulled back Meghan’s veil, arranging it carefully behind the Queen Mary bandeau tiara.

To the side of the bride, her mother, Doria Ragland, visibly fought back tears.

The formalities began. Harry was asked, “Will you take Meghan to be your wife? Will you love her, comfort her, honour and protect her, and, forsaking all others, be faithful to her as long as you both shall live?”

“I will,” he answered. The crowd murmured approval.

Meghan followed suit, answering clearly and firmly. She was led by her groom to the side of the chapel as Princess Diana’s sister, Lady Jane Fellowes, read from the Song of Solomon.

In a departure from the usual baroque royal wedding musical interludes, Karen Gibson conducted Christian group The Kingdom Choir in a gospel-style version of 1961 hit Stand By Me.

Then US bishop Michael Curry nearly stole the show with his sermon. He was animated, lively, passionate – and banged on for what seemed endless minutes about the power of love. His message? “Two young people fell in love and we all showed up.”

Eventually, the royals began to stir restlessly. Prince William and his wife Kate appeared to fight back laughter. Meghan looked at Harry and down at her lap. It was fabulously unique in the scheme of past royal celebrations, both heartfelt and showy.

Archbishop of Canterbury Justin Welby steered the ship back to solemnity and formality, conducting the vows as Harry and Meghan faced each other with their hands still linked.

“I Harry, take you Meghan, to be my wife, to have and to hold from this day forward; for better, for worse, for richer, for poorer, in sickness and in health, to love and to cherish, till death us do part,” the prince told the former actress.

“In the presence of God I make this vow.”

Meghan then responded. Like her groom, she spoke confidently and easily, with no slip ups, never losing eye contact.

Slipping a ring of Welsh gold onto Meghan’s finger, Harry told her: “With my body I honour you, all that I am I give to you, and all that I have I share with you, within the love of God, Father, Son and Holy Spirit.”

He exchanged a knowing half smile with Meghan, as she said her own vows and gave him a ring. The gesture broke with tradition; Prince William chose not to wear a wedding ring when he married Kate Middleton in 2011 because male jewellery is considered vulgar in aristocratic circles.

Then, almost in a rush, they were married. “I therefore proclaim that they are husband and wife,” the archbishop said.

As Etta James’ This Little Light of Mine played, the newly-minted Duke and Duchess linked hands, beaming, as they walked past the 600 guests and emerged into the pale Windsor sunshine.

Out the front of St George’s, under a giant archway of flowers with the royal family gathering behind them, Harry and Meghan shared their first kiss as a married couple.

Then they climbed into an open-topped landau carriage and clattered away through the streets of Windsor, cheered on by hundreds of thousands of well-wishers.

Back at Windsor Castle, the couple headed to St George’s Hall for a stand-up luncheon reception hosted by the Queen but similarly unstuffy a la the ceremony.

Bowls of food were passed around, Elton John played a mini-concert and Prince Charles gave an emotional speech about Harry’s childhood, ending with a description of the newylweds as “beautiful”, according to reports.

Harry’s speech “was very off-the-cuff, which was lovely”, a guest told People.

“He promised that all the Americans wouldn’t steal the swords and said, ‘Please, when you leave, be quiet as you don’t want to wake the neighbours”.

“Some people were even crying. I think it was just a very, really nice atmosphere to be in.”

The newylweds started their married life with a sweet message: Let them eat cake!

The wedding cake is to be served at the Reception. It was designed by Claire Ptak and features elderflower syrup made at The Queen’s residence in Sandringham from the estate’s own elderflower trees, as well as a light sponge cake uniquely formulated for the couple. #royalwedding pic.twitter.com/kt5lE4tEn9

Finally, it was time for a swift outfit change before they headed to their star-studded reception – a high-necked Stella McCartney gown for Meghan and a classic dinner suit for Harry.

Ever the gentleman, Harry opened the door of the electric-powered silver blue Jaguar E-Type Concept Zero they were driving to the reception for Meghan. The car’s number plate was E190518 – the wedding date.

Reports say Harry requested a Tiki-style bar and Meghan had a speech prepared for the reception, thrown by Charles in a $538,000 glass marquee in the grounds of Windsor Castle’s Frogmore House.

Time to party: Harry and Meghan celebrate at reception