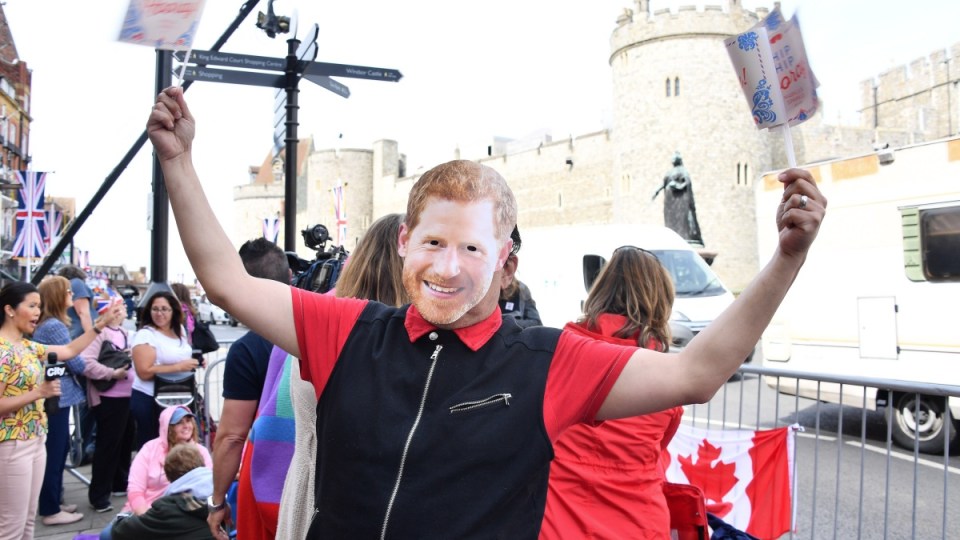 Royal fans gather outside Windsor Castle ahead of the Royal Wedding between Prince Harry and Ms. Meghan Markle Photo: Getty

Nearly two years after they met on a blind date in London then went camping in Botswana, Prince Harry and Meghan Markle will marry on Saturday at Windsor Castle.

By holding their big day on the weekend, the prince and former showgirl have broken royal tradition. But in keeping with it, they will spend the night apart before the big day, staying in separate hotels.

Here’s how the wedding day will unfold for the bride and groom – and how billions around the world can toast the newylweds from afar via live television broadcasts.

Prince Harry will wake in a canopied bed at the five-star country house Coworth Park, according to People magazine. Keeping him company: his best man, Prince William. The brothers could opt for a quick swim in the hotel’s indoor pool to shake off any cobwebs from the night before.

About 24 kilometres away, Meghan will spend her last morning as a single woman with her mother Doria Ragland at another luxe country retreat, Cliveden House. The 47-room, 350-year-old hotel has a spa where the ladies may have relaxed the night before.

While she has no adult bridesmaids in her party, Meghan will prep with two “close friends” from North America who will do her makeup, according to Marie Claire.

One is likely to be stylist Jessica Mulroney, her Canadian BFF and mother to three of the small bridal attendants.

Her hairstylist, Miguel Perez, who will have closely workshopped Meghan’s look ahead of time, will be in her suite, as will the as-yet unnamed designer of her wedding dress. Perez will fit Meghan’s show-stopping headpiece – hotly tipped to be the heirloom Spencer tiara.

The 600 invited guests will meet at the Windsor Farm Shop, 5 kilometres from Windsor Castle. According to The Telegraph, they will pass through security checks before catching buses to the castle’s Round Tower.

Instructions reportedly sent to guests said they will be asked to “surrender mobile telephones and any devices used for image capture”.

Other rules? Said The Telegraph, guests should not wear medals, and a list of suggestions about accessories stated: “No swords.”

Among the invitees are stars of Hollywood and the sporting world, aristocrats and the three siblings of Harry’s mother Princess Diana; Earl Spencer, Lady Sarah McCorquodale and Baroness Jane Fellowes.

After arriving at St George’s Chapel in state cars including Bentleys and Rolls Royces, members of the royal family will enter through the Galilee Porch.

The groom – tipped to wear his military uniform instead of a morning suit – and the Duke of Cambridge are expected to walk past the crowds in the grounds and arrive at the chapel’s west steps.

The Queen will be the last member of the royal family to take her place in the chapel.

After a 15-minute drive with her mother from their hotel, the bride will arrive at the west steps. Another car will bring the bridesmaids and pageboys, who include Prince George and Princess Charlotte.

Ms Ragland will walk into the chapel, followed by the junior party and the bride. In an poignant, symbolic move, Ms Markle will be handed off to Harry by his father Prince Charles, bringing all three Wales men together at the altar for love.

Harry sees Meghan in her dress for the first time.

The traditional ceremony begins, conducted by the Dean of Windsor and with the Archbishop of Canterbury officiating as the couple makes their vows.

Meghan will probably be given a wedding ring made of Welsh gold by Harry, but most royal men decide not to wear wedding rings.

When the service ends, the newlyweds will leave the chapel at the west steps. Royals watchers say it is the most likely place for the couple to share a public kiss before they are waved off in the open-topped 1883 Ascot Landau carriage.

Pulled by a team of four horses including father and son Storm and Tyrone, Harry and Meghan will drive through Windsor town. The almost-3-kilometre trip will end back at the castle.

The bride and groom will meet back up with their guests in St George’s Hall, for the first of the day’s two receptions. Bowl food, canapés and sweet nibbles will be passed at the stand-up event, hosted by the Queen.

The reception ends. After their wedding lunch in 2011, Prince William and Kate Middleton drove to Clarence House where, according to Vanity Fair, they relaxed in white towelling robes and watched a video of their ceremony. Harry and Meghan are likely to follow suit, in a special room at Windsor Castle where they will spend their first night as a married couple.

With Harry in black tie and Meghan in a different gown, the couple will be honoured at a party for 200 hosted by the Prince of Wales at Frogmore House, Windsor.

Again, if they follow William and Kate’s example, Harry and Meghan’s party will be a corker.

After their dinner of crab, Scottish lamb and miniature puddings, the Duke and Duchess of Cambridge treated their guests to a pop-up nightclub in Buckingham Palace’s Throne Room.

They reportedly danced to Elton John’s Your Song performed by Ellie Goulding before a fireworks display at 2.30am (local time).

While the exact details of their party are still unknown, Kensington Palace has promised one thing: The wedding will be “guided by tradition” but will also be “one which reflects the personalities of Prince Harry and Ms Markle”.

Royal wedding’s where and when, from Harry’s wake-up call to royal revelries late into the night