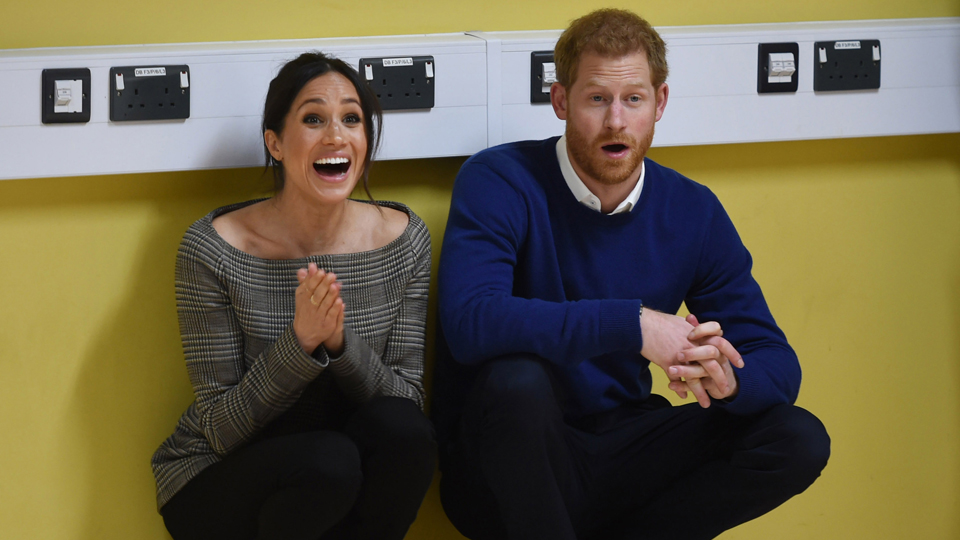 Meghan and Harry drop effortlessly into a crouch at a street dance class in Cardiff in January. Photo: Getty

With less than three weeks to go until he has to cut a dash in full military uniform at his May 19 wedding, Prince Harry is said to have been placed on a strict diet by fiancée Meghan Markle.

According to multiple media reports which all seem to stem from a single Daily Mail story, Harry has lost nearly four kilograms while working on his wedding body.

He and Meghan “have bought a top-of-the-range juicer and she has him on fruit and veg smoothies. She’s also weaning him off meat”, the source told the newspaper.

The prince’s alleged shedding for the wedding was taken even further by the Telegraph.

“Steel-cut oats with bee pollen in the morning, sashimi at lunch, a green juice to keep you going, and a hearty soup for supper,” the UK newspaper reported.

“Poor old Prince Harry. This is his reality now.”

Or is it? The internationally published stories claim Meghan, 36, “is in charge” of Harry, 33, and has introduced him to juicing, encouraged him to eat less meat and has had him replace carbs with quinoa.

Californian former actress Meghan is enforcing a regimen heavy on kale smoothies, turmeric cleanses and morning yoga, if what we read is to be believed.

It would be a huge change for the prince, who was raised at Kensington Palace with brother Prince William eating typical British comfort foods.

He was so partial to pizza and curries that McGrady combined the two into a chicken tikka masala pizza.

In August 1993, Princess Diana took her boys to Disney World in Florida. They rented out the whole fifth floor of Disney’s Grand Floridian Resort and Spa, where Harry fell in love with “crispy” bacon.

When the family came home, McGrady told Food & Wine that Harry instructed him on grilling bacon then microwaving it in paper towels.

“I thought, ‘Yeah, okay, thank you, you little brat’,” said the chef. “But as soon as he was gone, I tried it, and I got this amazingly crispy bacon.”

Harry graduated to other foods as he grew up. During his 10-year career in the British Army, Captain Wales was known for his love of KFC.

On the flipside, Harry has always had an active lifestyle and is a polo and running devotee. Even so, he’s reportedly ramped up his workouts ahead of his wedding; the day after his engagement was announced in November, he had a session at an upmarket Chelsea gym.

During one of her earliest visits in 2016 to Nottingham Cottage, Harry’s home in the grounds of Kensington Palace, Meghan (whose fridge staples include hummus, carrots and almond milk) was snapped coming home from local grocery shops with dinner ingredients.

But whether she is making Harry change his entire diet is another matter – on the night he proposed, Meghan had been in the kitchen roasting a chicken.

While Meghan is an acai bowl fan who told Best Health that when she was filming Suits she tried to eat vegan during the week, she has also said she loves pasta with cheese and pepper, meatloaf and avocado with poached eggs on thick toast.

French fries? “It’s its own food group for me,” she told Delish, admitting she became a fan of poutine – French fries topped with cheese and gravy – during her years living in Canada.

“It’s all about balance,” said Meghan, who runs and does daily yoga or Pilates.

“Because I work out the way I do, I don’t ever want to feel deprived.”

Unlike the Duchess of Cambridge, who is said to be a teetotaller, Megan loves a drink, particularly a tequila cocktail or “big, beautiful red”.

She even named her now-defunct lifestyle blog The Tig after her favourite wine, Tignanello.