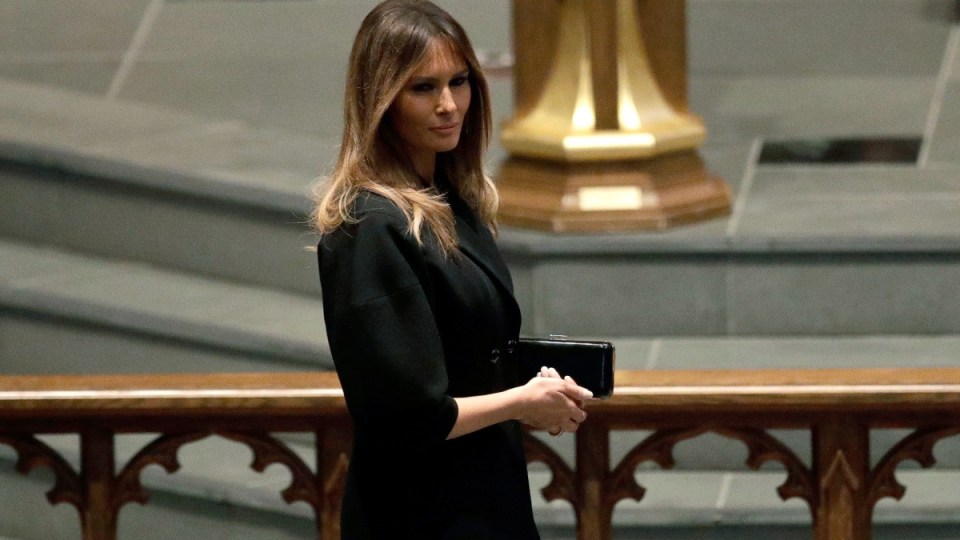 Three former US presidents walk into a church. One sits down next to the current first lady and makes her laugh. What did he say?

Melania Trump’s rare public lightheartedness with Barack Obama at Barbara Bush’s funeral in Houston, Texas on Saturday has sparked an intriguing mystery about their conversation.

Walking to her seat in the front row of St Martin’s Episcopal Church, a black-clad Melania looked suitably sombre.

Until she saw her seatmate – former US president Obama. She flashed an immediate, rare public smile that continued when she and Mr Obama began chatting before the service.

Almost immediately, online jokes began about how Mrs Trump appeared to be having a good time away from her husband, despite being at a funeral.

Mr Trump opted to miss the service, but said he was watching on television from his Florida estate Mar-a-Lago, which he called the “Southern White House”.

This is Melania and Obama sitting together today at former First Lady Barbara Bush's funeral. Have you ever, ever, EVER seen Melania smile like this, and look this relaxed, beside her own husband? Ever? pic.twitter.com/9qYLT2glIH

One social media user compared photos of the upbeat funeral Melania with the First Lady at her husband’s inauguration in January 2017.

Y'all. Melania is actually happier with Obama at a funeral than she is with Trump at his inauguration dinner!#barbarabushfuneral pic.twitter.com/SbWZQjpHDD

Wrote writer Bob Cesca, “Do not tweet this photo to Donald Trump. He’ll hate knowing the first time Melania cracked a smile in years was during a quiet chat to Obama.”

Andy Lassner, an executive producer for The Ellen DeGeneres Show, gave a shout-out out to the absent president: “Hey @POTUS – How’s golf?”

After the service, Mrs Trump again turned on the megawatt smile, posing for a photo with a similarly-cheery high-powered posse of former presidents and first ladies.

Politics were put aside as two generations of Bush presidents gathered for a snap with Hillary and Bill Clinton, the Obamas and Melania.

Mrs Clinton has an adversarial history with Mr Trump, who calls her “Crooked Hillary” and is a favourite target of his tweets.

Mr Obama has been frequently criticised by Mr Trump, and in January Michelle Obama joked about the awkwardness of being a handed a gift box by Mrs Trump on the White House steps on Inauguration Day.

As CNN put it, “The First Lady was literally, and voluntarily, walking into a den of potential adversaries.”

But as has become a trademark reaction to any drama surrounding her husband, Mrs Trump didn’t let on that she cared.

She is “a confident woman,” her communications director Stephanie Grisham said.

Speaking of confident, Mrs Trump has backed herself to organise her husband’s first state dinner without the help of an event planner.

The Trumps are hosting the important night in Washington on Tuesday for French President Emmanuel Macron and his wife Brigitte.

Melania reportedly began planning the details months ago, and hit on framing a section of French-inspired upholstery from a chair in the White House’s Blue Room.

According to CNN, on departure the Macrons will also receive a special photo album from the Trumps with snaps of their visit and a Tiffany & Co. silver bowl, engraved with the presidential seal.

“Mrs Trump selected every item and every detail for the dinner, from the entrée to the chair cushions,” said White House social secretary Rickie Niceta.

One person who didn’t give input into the night is Mr Trump.

“The President has been busy with his schedule,” Ms Grisham said.

“The First Lady took all preparations for the state dinner under her own wing.”