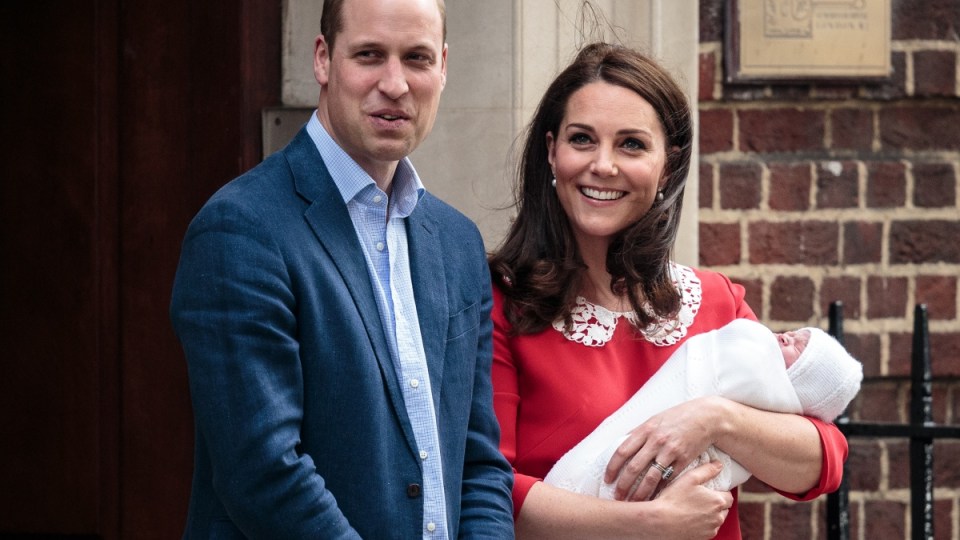 The Duke and Duchess of Cambridge pose for photographers with their newborn baby boy. Photo: Getty

The Duchess of Cambridge has given birth to her third child, a prince.

Prince William was by her side as Kate was “safely delivered” of a son at 11.01am (UK time) on Monday, according to a tweet from Kensington Palace.

The little boy weighed 3.8kgs, and mother and child “are both doing well”, the palace said.

A minute after the birth announcement, the palace tweeted that the royal family including the Queen – who protocol dictates is the first to hear the news of family babies – were “delighted” by news of the arrival.

The labour was fast. Kate and William drove from their Kensington Palace home to the exclusive Lindo Wing at St Mary’s Hospital, where the duchess gave birth several hours later.

“The Duchess of Cambridge was admitted to St Mary’s Hospital, London, earlier this morning in the early stages of labour,” Kensington Palace said in a statement released shortly after 8.20am (UK time).

Around four hours later, Kate’s stylist Natasha Archer was photographed leaving the Lindo Wing, a sign the baby may have arrived.

And Royals fans did not have to wait long to see the new prince.

Kate, wearing a red dress by Jenny Packham – whose designs she has worn to leave hospital with all three of her babies – smiled at hundreds of well-wishers and assembled journalists as she left the hospital cradling her baby just seven hours after the birth.

William held hands with Prince George, 4, and Princess Charlotte, 2, when he brought them to meet their new brother, then later expertly put his tiny son, strapped into a baby capsule, into a waiting car.

“Thrice the worry now,” William told reporters, holding up three fingers with a smile, as he got into the Land Rover to take his wife and newborn back to Kensington Palace.

“We didn’t keep you waiting too long this time.”

When asked about a name for the boy, William said: “You’ll find out sooner or later.” Bookmakers have made Albert, Arthur, Jack and Fred the favoured names for a boy.

Fifth in line to the throne, the new royal pushes Prince Harry to sixth ahead of his wedding to former actress Meghan Markle on May 19.

British Prime Minister Theresa May on Monday congratulated William and Kate on the birth of their second son.

“My warmest congratulations to the Duke and Duchess of Cambridge on the birth of their baby boy,” May said.

“I wish them great happiness for the future.”

The pregnancy had become a public waiting game for royals fans after Prince William said last month the baby was due “any minute”.

And so it seemed. A new website page dedicated to the impending arrival was set up by Kensington Palace in March. Kate kicked off her heels and began maternity leave.

Parking restrictions were put in place on April 9 outside St Mary’s, where Kate delivered the baby in the exclusive Lindo Wing.

Diehard royals fans began marking their spots outside the hospital, keen to be in prime position for when the Cambridges leave to take their new baby home.

But, until Monday, there was a lot of preparation and no cigar.

In the absence of the birth of a real story – the last official Instagram post by Kensington Palace of Kate was on her last day at work in March and she missed the Queen’s 92nd birthday concert on April 21 – the UK press called on its famed creativity.

The Duke and Duchess of Cambridge join a @teamsportsaid session as part of their day celebrating the Commonwealth, ahead of the Commonwealth Heads of Government Meeting (CHOGM) taking place in London next month. Later, Their Royal Highnesses also enjoyed a taking part in a #CommonwealthBigLunch at St Luke's Community Centre. 📷PA

Leading the pack, The Sun newspaper reprinted rumours the royal couple had been keeping a major surprise under wraps.

It quoted an unnamed “US publication” which ran a front-page feature saying a source claimed news had leaked from Kensington Palace that Kate, 36, was expecting identical twin girls.

It was also claimed that Kate was actually planning to give birth at home after straightforward births with George and Charlotte.

Baby fever had reached such a high that The Sun reported that Kate’s sister Pippa Middleton was also pregnant.

“Double the baby joy!” trumpeted People magazine about the Pippa claims, calling her a “mum-to-be” and saying “the Middleton family has lots to celebrate”.

Royal baby: It’s a boy for Kate and William