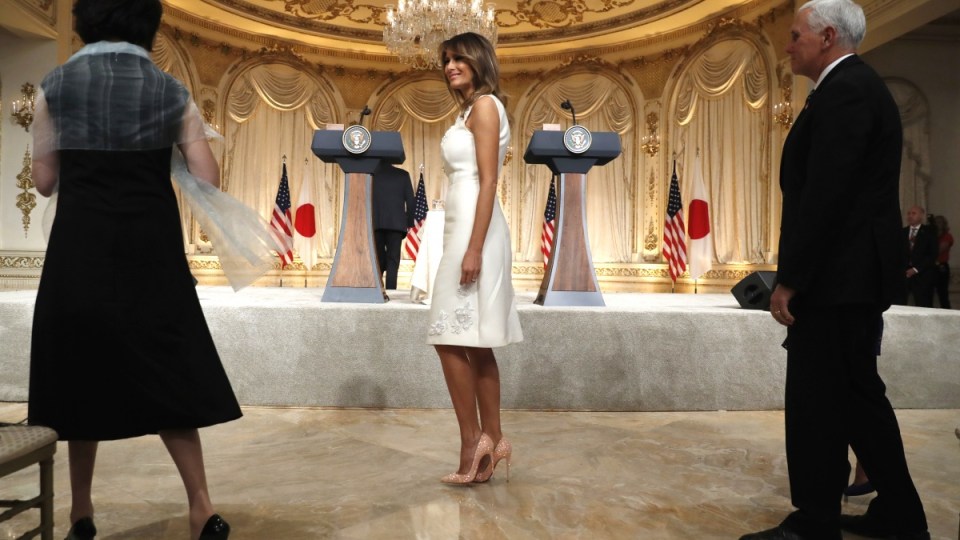 Melania Trump – who will attend Barbara Bush’s Texas funeral on Saturday without her president husband – has caused a fresh controversy with her choice of footwear at a recent press conference.

Maligned in August 2017 for flying to Texas after Hurricane Harvey wearing towering stilettos, Mrs Trump – the world’s most literal dresser – has been careful not to put a foot wrong.

But the glittery $1004 sugar pink Christian Louboutin pumps she wore to a press conference at Mar-a-Lago between President Trump and Japanese Prime Minister Shinzo Abe have sharply divided critics.

The furore kicked off as the two leaders exchanged platitudes and handshakes in the gold-lacquered ballroom at the Trumps’ Florida estate.

As Mr Trump and Mr Abe spoke, Doug Mills – a photographer for The New York Times’s Washington bureau since 2002 – turned his camera on Mrs Trump’s US size 10 feet.

For those keen on detail, her shoes are ‘Pigalle Follies’, and according to the designer, have a “superfine stiletto heel” and allow the wearer to “make a statement in mesmerizing Pompadour dragonfly glitter.”

Mr Mills tweeted a close up of the pumps, noting where and when Mrs Trump was wearing the disco-worthy shoes.

It sparked a protracted debate. In one corner, shoe shamers who thought Melania’s heels were too sparkly and silly for a political event. In the other, fans of a girlishly pretty heel. 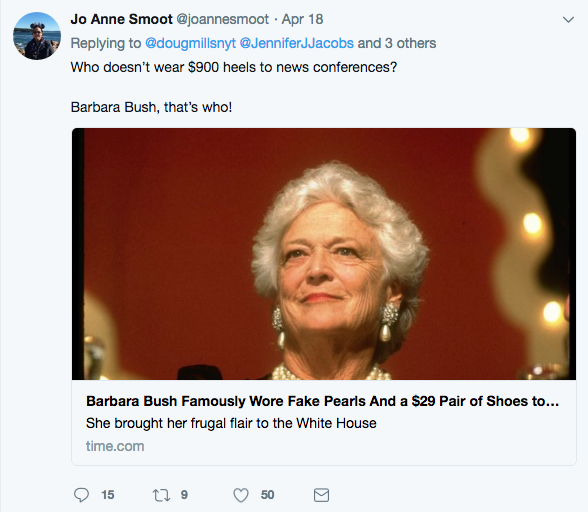 Nope. Unless it is a wedding, a dinner party or other gala, sparkly sky-high shoes are just tacky. This was a news conference.

Others defended the shoes, or at least didn’t care about them.

Wow the wife of a billionaire wears expensive shoes. Big whoop, on Long Island I see housewives wearing those.

Some people reserved their scorn for The New York Times for even giving the shoes play, claiming it was an anti-Trump conspiracy:

I can't believe people still listen to mainstream media. A global atrocity could be committed and they'll focus on Melania shoes. Or make assumptions against Barron Trump an 11 year old. Or maybe they'll complain that Trump had a second serving of ice cream after dinner.

The problem for Mrs Trump – who wore a white, beaded knee length dress with her current favourite fit-and-flare silhouette – was that she was treading a fine line from the get-go.

After the news conference the Trumps and Abes celebrated their international meet-and-greet with a fancy dinner at Mar-a-Lago.

Melania’s shoes needed to do double duty, from day to night.

As one breathless fashion website put it, “It was clear as she made her way to the dinner table these shoes were made to be seen, photographed, and admired by all”.

Mrs Trump’s other shoe choices during the Abe visit went unchallenged in mainstream media and on social media.

To greet the Japanese visitors on April 17, Mrs Trump went matchy-matchy with her husband’s navy and white nautical theme. She wore her beloved Louboutin 12.7cm ‘So Kate’ stilettos with a Carolina Herrera trumpet-skirt dress.

Next day, giving Akie Abe what was referred to by Newsweek as “a history lesson” at a local museum, Melania wore the ‘So Kate’ pumps in python with a belted deep green shirt dress.

Former model Melania and her office did not respond on her social media accounts to the latest controversy. Last time she was accused of putting her foot in it, she briefly switched up her favoured Louboutins for Stan Smith tennis shoes. 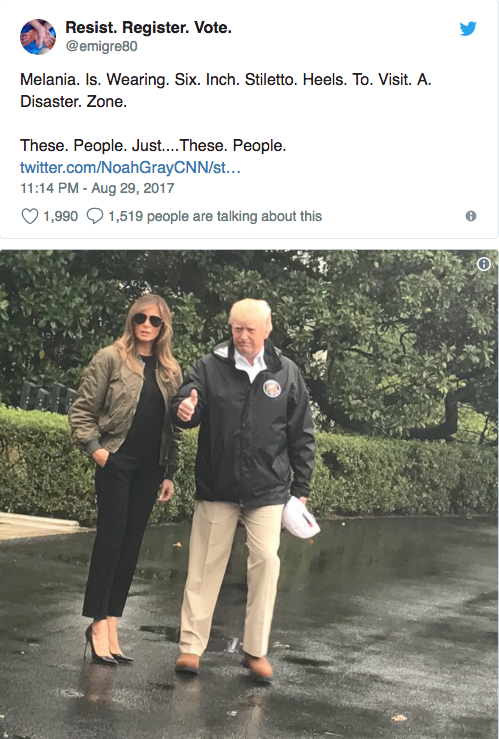 Melania Trump kicks up a fashion storm with her fancy heels