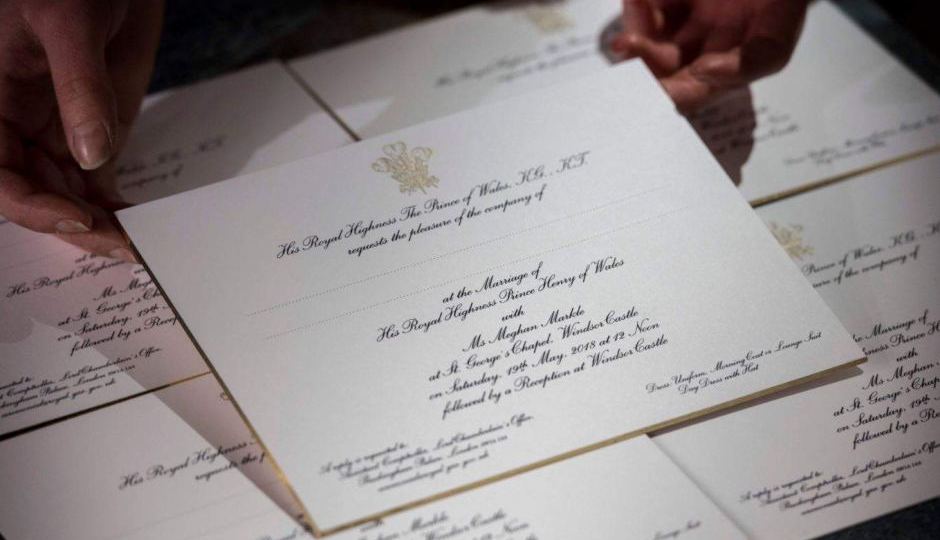 600 people have been invited to the nuptials at Windsor Castle on May 19. Photo: Twitter

Prince Harry and his American fiancée Meghan Markle have invited 600 guests to their wedding in May although who is on the list is not being revealed yet, Kensington Palace says.

The Palace said all those invited to the May 19 ceremony at St George’s Chapel, Windsor Castle, his grandmother Queen Elizabeth’s home west of London, would also be invited to the lunchtime reception afterwards.

Later in the evening, 200 guests will attend a private reception at nearby Frogmore House which will be hosted by Harry’s father, Charles, the Prince of Wales.

The palace said the invitations, die-stamped in gold with the edges bevelled and gilded, had been sent out this week. However, it said no details of who had been invited would be released at this stage.

About 1900 people were invited to the lavish wedding of Harry’s elder brother William and wife Kate at London’s Westminster Abbey in 2011.

Their guest list included celebrities such as singer Elton John, ex-soccer player David Beckham and his fashion designer wife Victoria along with royalty from around the world and political figures, although not international heads of state.

Some British newspapers have speculated that Harry might invite former US President Barack Obama whom he interviewed for BBC radio at Christmas, but not current President Donald Trump.

Royal biographer Claudia Joseph said Harry would not want to do anything that would have political repercussions that could cause embarrassment for the queen.

“Harry adores his grandmother and is not going to want to upset her,” Joseph, author of How to Dress Like a Princess, told Reuters. “The last thing he’s going to want to do is spark World War Three.”

She said the choices Harry and Meghan had made so far indicated they would have a more personal wedding than William and Kate.

The palace has already announced that more than 2600 members of the public and figures from charities the couple support would be invited to watch the arrivals of the bride and groom and their guests, and to see them depart on a carriage procession around Windsor after the ceremony.

In the Kensington Palace statement, Harry and Meghan said they wanted 1200 members of the general public to be selected by “Lord Lieutenants, including young people who have shown strong leadership and those who have served their communities”.

Using American ink on English card, the invitations are printed in gold and black, then burnished to bring out the shine, and gilded around the edge. pic.twitter.com/gQpC6tDot0

There will also be 200 people from a range of charities and organisations which Harry and Meghan have a close association with, including several which Harry serves as Patron.

The Royal School, Great Park, Windsor and St George’s School, Windsor Castle – both of which have a strong affiliation with the Windsor Castle community – will select a lucky group of 100 students.

The remainder of the guest list is made up of 610 Windsor Castle community members, including residents of Windsor Castle and members of the St George’s Chapel community and 530 Members of The Royal Households and Crown Estate.