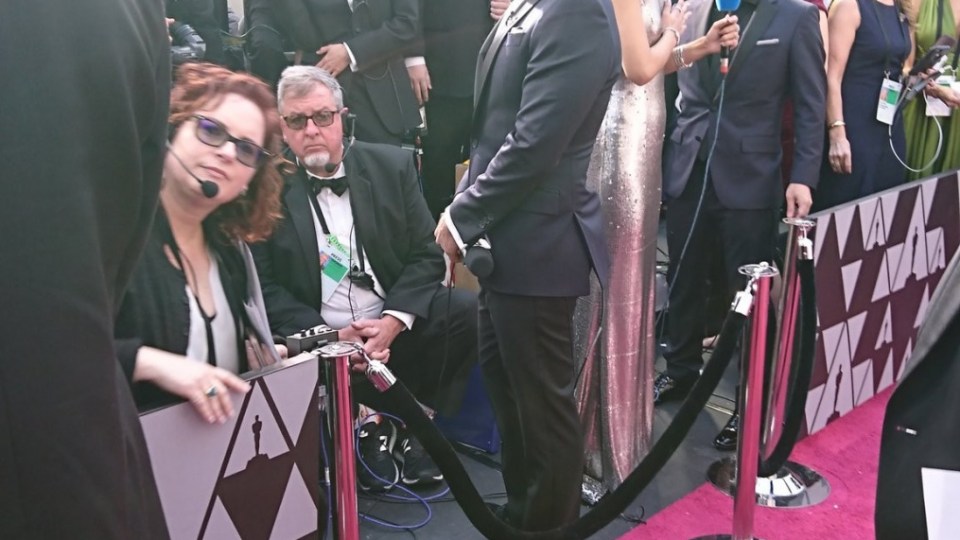 Reporter Amy Kaufman said of this photo: "[Ryan Seacrest's] team was not pleased when I took a photo of him." Photo: Twitter/Amy Kaufman

The allegations were levelled against Seacrest by his former personal stylist, Suzie Hardy, who claimed he subjected her to years of sexual aggression. Seacrest has repeatedly denied the accusations.

That didn’t stop stars like Jennifer Lawrence actively avoiding the longtime E! Entertainment host on the red carpet, with other media noting he was struggling to get interviews.

While Seacrest, 43, is typically the go-to host for big-name stars at awards shows, this year he only managed to attract two big names to his corner of the carpet – Allison Janney and Taraji P Henson.

During her interview with Seacrest, the notoriously outspoken Henson made what many interpreted as an overt dig at him over the allegations.

“The universe has a way of taking care of the good people, you know what I mean?” she said, lifting his chin up with her finger.

“I agree,” was Seacrest’s response.

Henson then moved on to her next interview where she was again accused of taking a swipe at Seacrest for saying to ABC host Wendi McLendon-Covey: “I’m great now that I’m in your company.”

Taraji P. Henson is going to fight Ryan Seacrest with her fists before the night is over pic.twitter.com/BmWnm8D3Ns

But Henson later insisted to People magazine her comments were “misconstrued”.

“I did it to keep his chin up. It’s an awkward position to be in. He’s been cleared, but anyone can say anything,” she said.

Still, E! Entertainment was not confident its star host would be safe from all-out verbal attacks from his interviewees.

According to Deadline, the network placed its annual red carpet broadcast on a 30-second delay in order to prevent any confrontations from going to air.