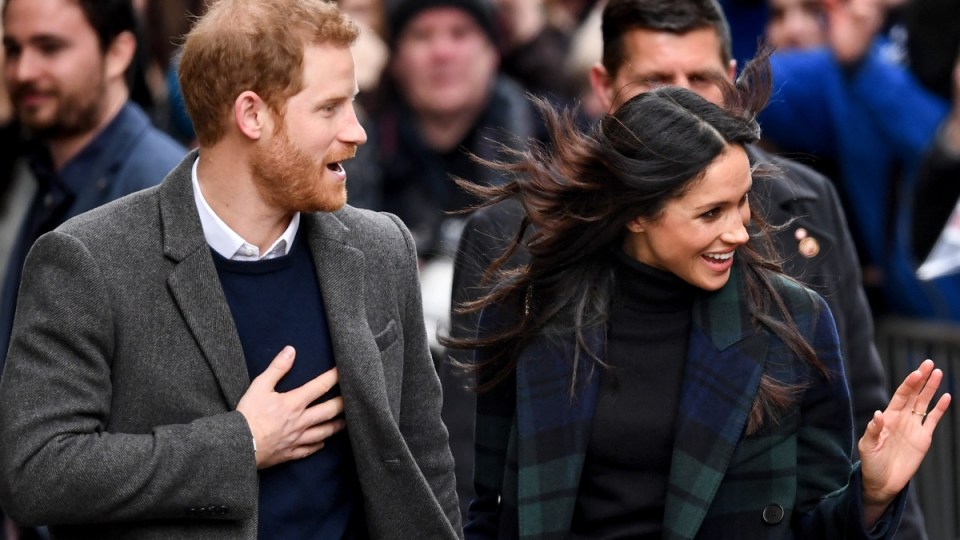 "It means a lot to both of us to be here," said Meghan Markle, in Edinburgh with Prince Harry on February 13. Photo: Getty

Meghan Markle has won over the royal Corgis, according to Prince Harry, but proved less successful as a horse whisperer during an encounter with a Shetland pony in Edinburgh on February 13.

Making her debut visit to Scotland, Meghan was greeted with an offhand sniff by military mascot Corporal Cruachan IV.

Cruachan was more interested in Harry, 33, attempting to bite him when he reached out for a pat.

Clearly delighted, Meghan laughed out loud at her man’s mishap.

The pony later used his Twitter account (1067 followers) to blame Harry for the nip: “The prince was teasing me.”

Like the Shetland, Meghan, 36, wore plaid, hers a $3524 Burberry overcoat in the official tartan of the Black Watch, the third Battalion of the Royal Regiment of Scotland.

Her future father-in-law Prince Charles is Royal Colonel of the battalion.

Prince Harry and Ms. Markle are greeted on arrival at Edinburgh Castle by the Band of the Royal Marines and the mascot of The Royal Regiment of Scotland, Shetland pony Cruachan🐴 pic.twitter.com/3nzR9W6ZP5

Meghan teamed it with wide-legged Veronica Beard pants and a Wolford turtleneck bodysuit. “She said she was freezing”, said student Maya Moss, 22, who met the former Suits star during the couple’s walkabout.

Later in the day, when apologies were made for the cold, Meghan said, “It’s not that bad. I was in Toronto for six years.”

As they arrived at Edinburgh Castle, Harry and Meghan held hands almost constantly and draped their arms around each other’s waists.

With romance so obviously in the air, one person in the crowd asked Meghan about her hen’s night ahead of her May 19 Windsor Castle wedding.

Because friends have planned the night, Meghan doesn’t know all the details but said, “It’s sorted, it will be fun,” bystander Tom Martin told People.

Local baker Carolyn Chisholm gave Meghan a batch of heart-shaped potato scones, but the prospective duchess’s pronunciation of “scone” was a failure with the crowd.

The California native, currently in the process of becoming a British citizen, rhymed it with “gone”, not “bone” as per the Scottish way.

Inside the castle, Harry and Meghan again linked hands to stroll onto the ramparts for the firing of the One O’Clock Gun, a 157-year-old tradition that marks time for ships.

They put in ear plugs for the explosion, but not before Harry asked so many questions he nearly delayed the time-critical event.

“I was very conscious of the time,” said Sergeant Dave Beveridge, of the Royal Artillery. “I was worried I’d have to stop talking.”

They then moved to Social Bite, a network of cafes set up to help the homeless which has previously welcomed George Clooney, Leonardo DiCaprio and the Duchess of Cornwall.

In the kitchen, Meghan said she volunteered in a soup kitchen as a teenager. The shop manager offered her a job on the spot, provided she played “good music” in the kitchen.

“I can vouch for that,” Prince Harry said. “She does have good tunes.”

The last public part of the couple’s day saw them visit the Great Gallery of the Palace of Holyroodhouse, where they were serenaded with an accoustic version of Ed Sheeran’s Perfect by a group of 50 young people.

Meghan “looked like she was going to cry,” said Ciara MacDonald, 17, one of the singers.

The couple’s next joint trip has not been announced by Kensington Palace but a day in Northern Ireland is tipped.