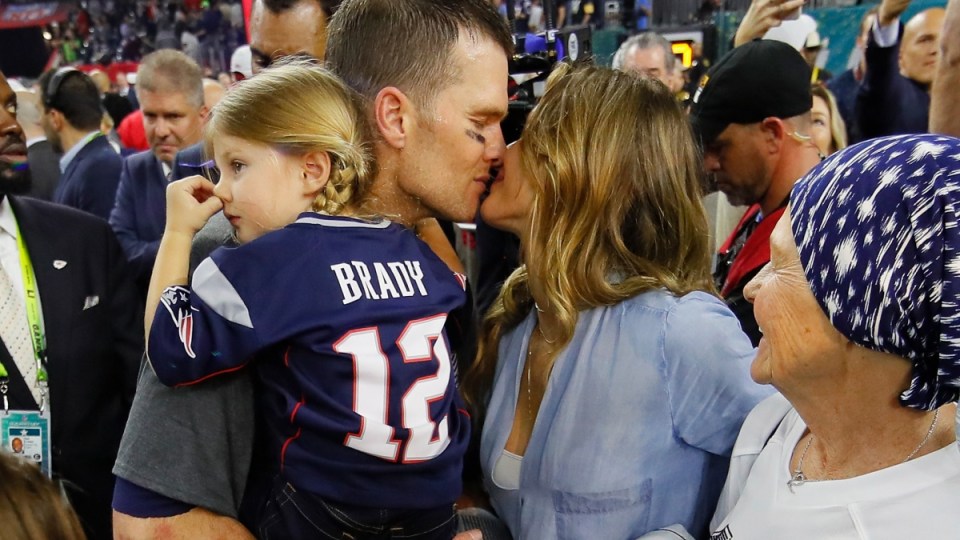 A lingering kiss between New England Patriots quarterback Tom Brady and his 11-year-old son has polarised the internet, with some praising male affection and others calling it “very disturbing” and “uncomfortably long”.

In a scene from the 40-year-old footballer’s multi-part documentary Facebook Watch series, Tom vs.Time, Brady’s son, Jack, opens the door to a room where his father is receiving massage therapy and asks if he can play a “fantasy team” video game.

Brady, lying on the massage table asks his son: “What do I get?”

Laughing and sauntering into the room in mild protest, Jack gives his father a peck on the lips and walks towards the door as the masseur chips in: “You know Jack everything comes at a cost, bud”.

Turning back to his father, Jack sighs, rolls his eyes and makes his way back to the massage table before kissing Brady again, but lingers for several seconds before wiping his lips with his T-shirt.

Twitter exploded with comments about Brady’s long kiss with his son in the lead-up to this weekend’s Superbowl between his side, The New England Patriots, and the Philadelphia Eagles.

The scene was aired on the Facebook Watch series third episode, ‘The Social Game’, showing everything from Brady’s morning blueberry and almond milk smoothie to detailing his philosophy about team sport.

One Twitter user said Brady was one of his “five favourite people”, including his own family members, but making his son come back and kiss him on the lips for a longer time – because his first lip kiss wasn’t long enough – was some “very disturbing” content.

Tom Brady won't eat a tomato or sleep without his kale pajamas but he'll kiss his germ spreading kid for 8.5 seconds pic.twitter.com/UOPCyPti0G

However, others online have been quick to defend Brady’s kiss with his son.

“Anyone who feels it was inappropriate for Tom Brady to kiss his 11-year-old son should get their mind out of the gutter,” one Twitter user said.

“All I see is a loving dad … and last I checked, that was a good thing.”

Another social media user said Brady’s son giving his dad a kiss on the lips didn’t raise any questions.

“If you see something creepy in that video, then that’s on you,” they said.

It’s not the first time fans have reacted to male affection in the Brady family after the Patriots player was spotted kissing his father on the lips at the Superbowl in February last year.

In his daughter’s defence, Brady said he had come on the show for many years and had given the Boston-based radio station WEEI’s Kirk & Callahan show respect.

“It’s very disappointing when you hear that, certainly. My daughter, or any child, certainly don’t deserve that,” Brady said before hanging up

Brady has not commented on the kiss.