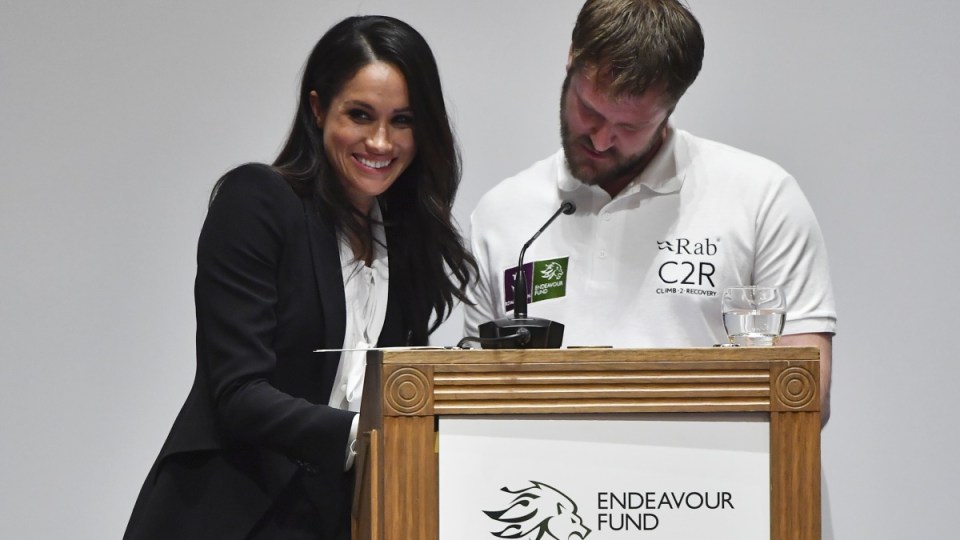 Meghan Markle takes to the podium at an awards night in London on February 1. Photo: Getty

Stepping out with fiancé Prince Harry in London for their first evening engagement, an independent Meghan Markle put her Hollywood skills to good use.

The former actress broke with protocol by choosing a no-nonsense suit over a dress to meet military heroes and make her debut public speech as a royal-in-training.

She also bent the rules by presenting an award before she’s officially a Windsor, but it didn’t seem to bother a supportive Harry, watching proudly from the audience.

It was a big night for McQueen. At the same time, 1700 kilometres away in Oslo, Norway, the Duchess of Cambridge was also wearing the British designer – but as Elle put it: “Kate Middleton’s Alexander McQueen evening gown is as royal as you can get.”

Carrying out their fourth joint job, Harry, 33, and Meghan were guests of honour at the annual Endeavour Fund Awards at the Goldsmiths’ Hall.

Arriving for a pre-ceremony reception, a smiling Meghan carried an umbrella and briefly took Harry’s arm as she walked up a flight of stairs.

Supported by the Royal Foundation run by Kate, William and Harry, the event honours the achievements of wounded, injured and sick servicemen and women who have taken part in sporting and adventure challenges to help with their mental and physical recovery.

Meghan will become a patron of the foundation when she marries Harry at Windsor Castle on May 19.

Showing zero nerves, Meghan – who had been on the judging panel –took to the microphone to present the second honour of the night, the Celebrating Excellence Award.

There was a small snafu as previous winner Neil Heritage struggled with the envelope containing nominees’ names. Standing with him, Meghan beamed and helped him out before presenting the award.

“I’m truly privileged to be here,” she said, introducing royal marine veteran Daniel Claricoates as the winner of the award.

“Daniel acquired complex post-traumatic stress after multiple tours in Afghanistan with the Royal Marines, during which he was awarded the Military Cross,” Meghan said.

She spoke confidently about Mr Claricoates’ battle with post-traumatic stress syndrome and how he has climbed the highest mountains in Africa and Antarctica.

Harry also gave a speech before handing out the final award of the night, telling the nominees, “You guys are truly awesome and society needs every single one of you.”

Meanwhile, after Meghan’s exit from her role of lawyer Rachel Zane in Suits, Katherine Heigl has joined the cast of the legal drama for its eight season.

It’s Heigl’s first big TV role since she left Grey’s Anatomy in 2010 amid rumours she was “difficult” to work with.

Her character, Samantha Wheeler, is a new partner at Pearson Specter Litt. The show’s makers have called her the law firm’s “greatest or most powerful ally”.

Heigl, 39, said she had “watched Suits from the very beginning” and is an “immense fan” of the cast.