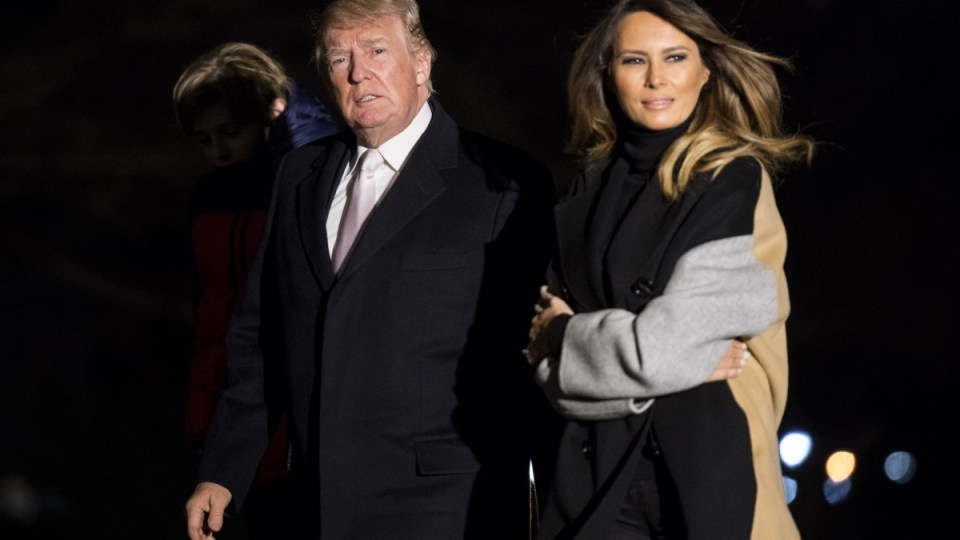 Body language, anyone? Donald and Melania Trump return to the White House on January 15. Photo: Getty

Disembarking her plane in Florida’s West Palm Beach after it landed from Washington on January 25, Melania Trump wasted no time sliding into her motorcade and being driven to her husband’s Florida estate, Mar-a-Lago.

It was an unexpected and unusually brief appearance by the First Lady, who was initially slated to accompany President Donald Trump to the World Economic Forum in Switzerland, but bailed at the last minute.

She was expected to be more forthcoming on Friday night (US time) if she showed at the Safari Night Ball at Mar-a-Lago, but reversing a tough two weeks could take more than a controlled public appearance on home turf.

The Wall Street Journal, which first reported the story on January 12, claims Daniels was paid $US130,000 in hush money.

Ms Daniels has denied receiving the payment from Mr Trump’s lawyer Michael Cohen, and Mr Trump, 71, has denied the affair ever took place.

Still, “there’s no shortage of clues that the Trumps’ marriage might be an unhappy one,” said People magazine during the fallout, highlighting reports the pair are said to keep separate bedrooms at the White House.

A couple of hours after the Wall Street Journal story broke, Mrs Trump flew to Mar-a-Lago with the president, “where she was not seen by the press pool the entire long weekend,” said CNN.

Boarding Air Force One on January 15 to fly home to Washington, she trudged up the stairs “in blustery wind and rain, behind her husband, who carried an umbrella but did not offer it to his wife,” said a report.

Mrs Trump did not break cover again for 10 days, and then it was unusually low-key.

Earlier on the day of her Florida trip, sombre in a tweed coat and signature pumps, the First Lady made a visit – unpublicised and unaccompanied by reporters – to the Holocaust Museum in Washington, two days before International Holocaust Remembrance Day.

Touring the museum, Mrs Trump, 47, took part in a moment of silence at the eternal flame in the Hall of Remembrance, and lit a candle at the museum’s prayer wall.

Thank you @HolocaustMuseum for a powerful & moving tour that honors the millions of innocent lives lost, and educates us on the tragedies and effects of the holocaust. #weremember #askwhy

Later, in a statement, she sent prayers to families “broken” by the Holocaust, mentioning coming “together” in strength: “My heart is with you.”

The irony of talking about broken families was noted, and while it’s not the first time Mrs Trump has made unannounced appearances without a press corp at her heels, the context was striking.

It came after she changed her mind at the last minute – when schedules and wardrobes would have been planned months in advance – about going to Davos, Switzerland, with Mr Trump for the World Economic Forum.

Mrs Trump’s communications director Stephanie Grisham had confirmed on January 15 that the First Lady would be among the Davos touring party.

Ms Grisham backtracked on January 22, saying Mrs Trump had pulled out of the trip: “It was determined there were too many scheduling and logistical issues.”

January 22 was also the Trumps’ 13th wedding anniversary, but it came and went without either marking it in any public manner.

Instead, the president spent the day, said The New York Times, firing off tweets blasting Democrats “and suggesting women marching in protest of his presidency were somehow celebrating it”.

Said CNN: “Requests to the West Wing and East Wing press offices to inquire whether the couple celebrated in person were not returned.”

Two days earlier, Mrs Trump commemorated the first anniversary of her husband’s inauguration by tweeting a photo – of herself with a marine escort.

The First Lady’s “apparent antipathy to her job” and “quiet rebellion” in the face of her latest travails drew the admiration of The New York Times.

“Mrs Trump may end up doing more than any of her predecessors to upend our expectations of the slavish devotion a first lady must display toward her husband,” said the newspaper.

“Would it have been beneficial to Donald Trump for his wife to stand beside him in Davos and show a united front, as we have come to expect from first ladies? Absolutely. Does she care? Probably not.”