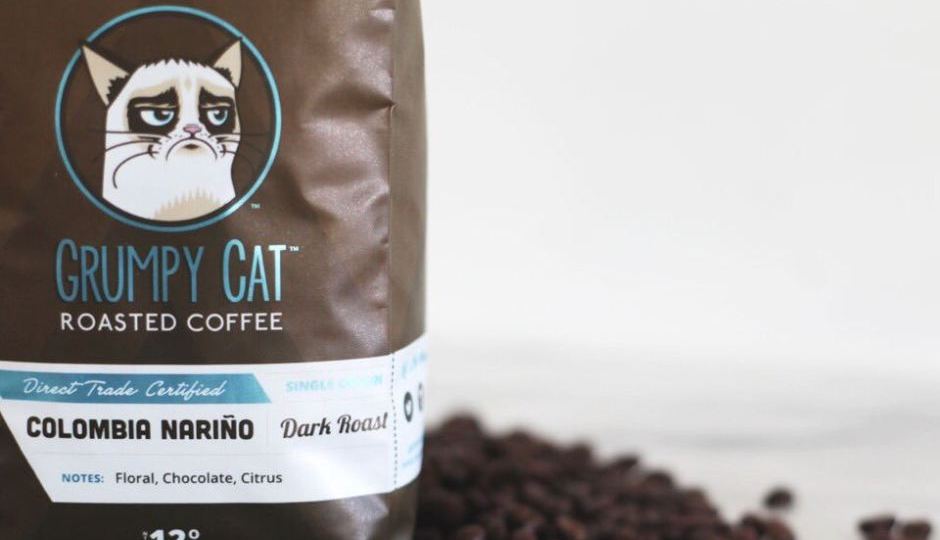 A promotional image from Grumpy Cat Coffee shows the ground coffee at the centre of the dispute. Photo: Twitter

One of the internet’s most famous cats has one less reason to be grumpy after winning $881,600 in a copyright case in California.

Grumpy Cat – real name Tardar Sauce – became a viral sensation thanks to its aggressively moody expression, which is thought to be caused by feline dwarfism and an underbite.

It has had a Christmas film (Grumpy Cat’s Worst Christmas Ever), TV appearances and a range of merchandise, 2.4 million followers on Instagram, appears with celebrities at conventions and Oscars parties and has its own animatronic double at Madame Tussauds wax museum in London.

It also has an iced coffee, Grumpy Cat Grumppuccino, which led to a breach of contract suit against manufacturer Grumpy Beverages.

Courthouse News reports that Nick and his father Paul Sandford entered into an agreement with Grumpy Cat Limited to make the iced coffee, paying $US150,000 ($186,000) in upfront royalties in 2013.

The non-grumpy relationship between the Sandfords and Grumpy Cat’s owner broke down when Grumpy Beverages started selling ground coffee using the cat’s likeness without permission.

Although the coffee was promoted with the phrase “the perfect candidate to turn your frown upside down!”, Grumpy Cat Limited sued the Sandfords for breach of contract.

The Sandfords promptly countersued, seeking $12 million in damages based on potential lost revenue.

“Paul Sandford named the entity as Grumpy Beverage, because they wanted to include multiple beverages,” the Sandford’s lawyer Brian Kinder said.

The Sandfords also claimed Grumpy Cat Limited had sabotaged the launch of the iced coffee through badly timed and inadequate social media posts, and during TV appearances.

But Grumpy Cat Limited’s lawyer David Jonelis disputed all these claims, saying his clients had been assured the Sandfords would handle marketing.

“They were the beverage people. My client was just the cat people,” Mr Jonelis said.

In the end, the jury sided with Grumpy Cat and awarded its owners $US710,000 ($881,600) for copyright and trademark infringement and $1 in nominal damages on the breach of contract claim.

Grumpy Cat itself was not present during closing arguments but did make a brief appearance in court earlier in the trial.