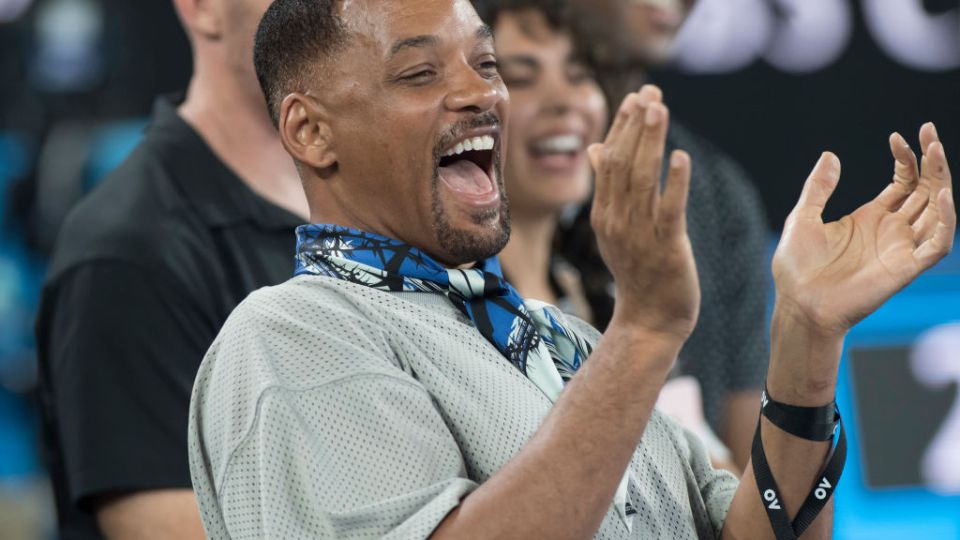 Actor Will Smith enjoys a laugh with Nick Kyrgios at the Australian Open. Photo: Getty

No one is having a better time than Will Smith, who has just spent 10 days in Australia living seriously large.

If only we could all have holidays like the multi-millionaire actor, who was last spotted on the Great Barrier Reef, ticking another item off his “bucket list”.

Smith is reportedly in Australia for work, but as far as we can tell he’s busier catching every sight he can: from the top of the Sydney Harbour Bridge, to courtside at notorious bad boy Nick Kyrgios’ Australian Open match, to coin tossing at a Big Bash League game on Saturday.

The 49-year-old superstar has definitely made his mark Down Under since his arrival last week. Truly, he’s having such a good time, The New Daily is officially wondering why the Men In Black star is actually in Australia?

The official word is that Smith is here promoting his Netflix film Bright, colloquially known as the “Orc film” – where Smith is a human police officer paired with an Orc cop in a world where humans and fantasy characters live side by side – which was widely panned by critics.

Funny, then, that Smith has conducted exactly one official press interview for the film in Australia – for Channel Seven’s Sunrise program with David Koch and Samantha Armytage.

Smith appeared on the program on January 14 with co-stars Joel Edgerton and Lucy Fry to promote Bright, but to date the early-morning interview is the only official press Smith has done for the film.

While Netflix has confirmed that Smith is in Australia to promote the movie, it declined to comment further on the actor’s Antipodean adventures. So it’s left to us to speculate about Smith’s unorthodox press tour, which has taken him from a boat at Bondi Beach all the way to the Triennial exhibition at the National Gallery of Victoria in Melbourne.

Will Smith meets NGV Triennial. Thanks for visiting, Will! pic.twitter.com/Pr2hvg4TLd

And Smith is certainly generating a lot of buzz – and not just in the tabloids. Just before his Australian trip, the father of two opened up his first Instagram account, and he’s been dutifully chronicling every part of his Aussie adventure like a pro … even his Bondi café fare.

Okay… I ABSOLUTELY HATE when people post pictures of food! BUT… this damn Green Pea Pancake at Porch & Parlour in Bondi Beach, Australia… It Broke Me, Y’all.

And who can resist a cheeky snap of a good coffee cup? Especially when it’s got your name on it – literally!

The whole trip is mighty mysterious, but we guess we can’t blame Smith for taking advantage of a summer holiday in Australia when it’s offered to him. Especially not when the world’s best and brightest are taking to the courts at the Australian Open.

Smith spent a wild evening courtside during Kyrgios’ epic win against Jo-Wilfried Tsonga last Friday evening. He caused such a splash, even the Australian No.1 was impressed by the Hollywood star’s attendance.

“No joke,” Kyrgios said, “he’s like my favourite actor.”

While at the match, Smith caused such a stir he was serenaded by an excited crowd, with a round of the Bad Boys theme from the 1990s film franchise in which he stars alongside Martin Lawrence.

No matter what Smith has been doing this past fortnight, it’s been entertaining to watch. So, if this is the future of Hollywood press tours Down Under, we’re all for it.

Will Smith’s holiday to Australia is filled with mystery