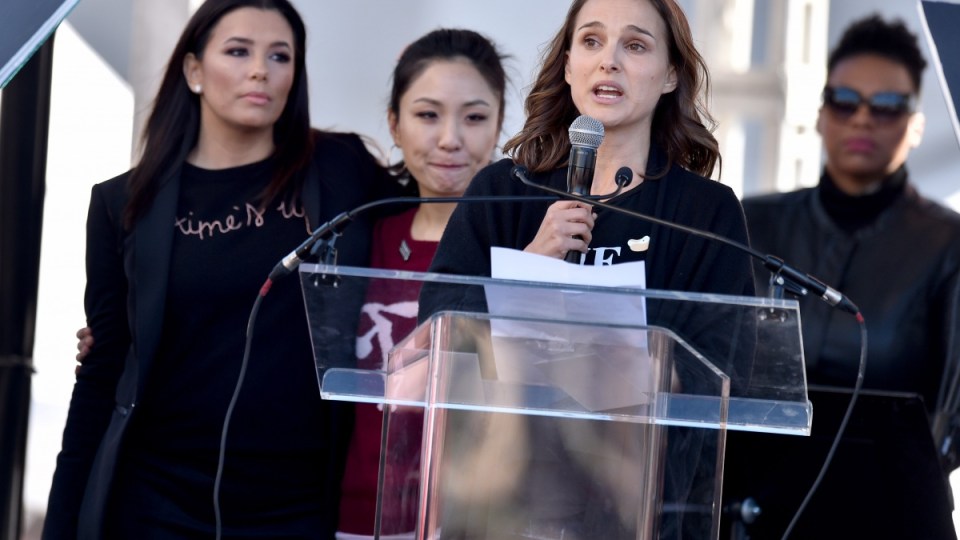 Natalie Portman recounted her experience of 'sexual terrorism' when she was just 13. Photo: AAP

Oscar winner Natalie Portman has told how an environment of “sexual terrorism” as a teenager led to her covering up her body and “inhibiting her expression and her work”, as Scarlett Johansson called out fellow actor James Franco over allegations of sexual misconduct.

Portman, 36, joined other Hollywood stars on stage in Los Angeles, California, to share their experiences of harassment and prejudice during one of the many Women’s Marches being held across the world on the anniversary of Donald Trump’s inauguration as US President.

She recalled her coming of age as she filmed her first big project, 1994’s Leon: The Professional, which was released when she was 13 – 23 years ago.

“I turned 12 on the set of my first film The Professional, in which I played a young girl who befriends a hitman and hopes to avenge the murder of her family.

“The character is simultaneously discovering and developing her womanhood, her voice and her desire.

“At that moment in my life, I too was discovering my own womanhood, my own desire and my own voice.

“I was so excited at 13 when the film was released and my work and my art would have a human response.

“I excitedly opened my first fan mail to read a rape fantasy that a man had written me.”

“I felt the need to cover my body and to inhibit my expression and my work in order to send my own message to the world that I’m someone worthy of safety and respect.

“The response to my expression, from small comments about my body to more threatening deliberate statements, served to control my behaviour through an environment of sexual terrorism.”

Meanwhile, in her speech at the Women’s March, Scarlett Johansson called out Golden Globe winner James Franco at the rally for endorsing the Time’s Up movement, despite being accused of sexual misconduct by five women.

While Johansson didn’t specifically name him, speculation on social media immediately pointed toward Franco, after the Los Angeles Times published on January 11 allegations of sexual misconduct levelled against the actor.

Franco has denied the allegations, while a representative for the actress later confirmed to US media outlets that her comments were indeed referring to him.

Franco wore a Time’s Up pin while accepting his Golden Globe gong two weeks ago, in a show of solidarity with the movement, prompting Johansson to tell the crowd at the weekend: “I want my pin back, by the way.”

“How could a person publicly stand by an organisation that helps to provide support for victims of sexual assault while privately preying on people who have no power?” Johansson alleged.

Johansson went on to detail some of her experience as a young woman working in Hollywood.

“Suddenly I was 19 again and I began to remember all the men who had taken advantage of the fact that I was a young woman who didn’t yet have the tools to say no, or understand the value of my own self-worth,” she said.

“I had many relationships both personal and professional where the power dynamic was so off that I had to create a narrative that I was the cool girl who could hang in and hang out, and that sometimes meant compromising what felt right for me.”

‘I want my pin back’