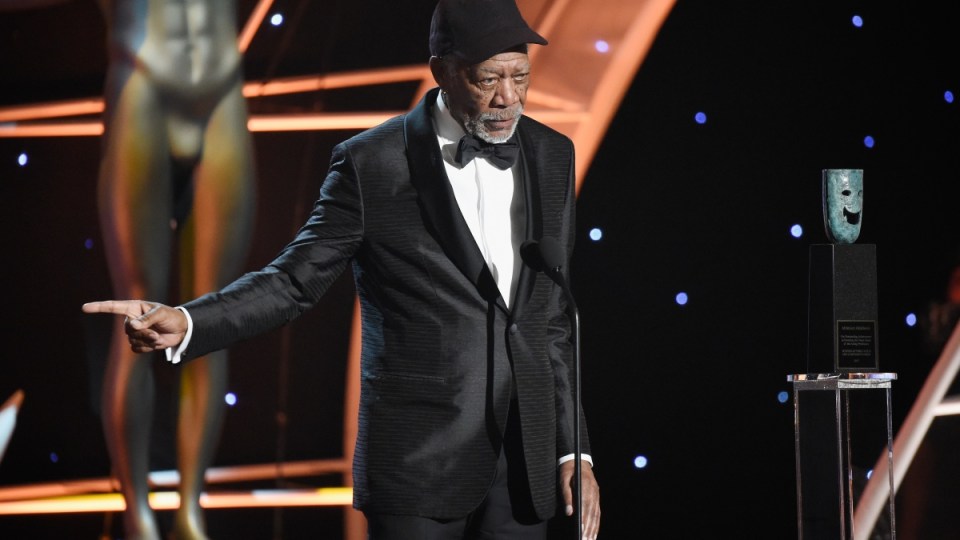 Things started on an odd note when Morgan Freeman strode onstage to receive the Lifetime Achievement award at the Screen Actors Guild Awards – he was wearing a baseball cap with his tux – then went to plain weird when the actor had words with someone in the front row.

“Hey … I’m talking to you. Yeah, hey,” Freeman said to an unidentified person who interrupted him on stage at the Shrine Auditorium and Expo Hall in Los Angeles on Sunday (US time).

The altercation in front of a live and television audience continued when Freeman added: “Okay, well, you just stand out to me. That’s all.”

The anonymous chatterbox wasn’t the only one who threatened to steal Freeman’s time in the limelight, with actor Rita Moreno receiving a standing ovation before presenting the award to her “buddy”, Freeman.

His Electric Company co-star piped up before Freeman could launch into his thanks – to SAG-AFTRA, his family and life partner – urging him, “Morgan, lift up your hat! Lift it up!”

He did – before calling out another entity, the SAG Awards statue itself – at the third major film and TV awards event to be held in the wake of the Harvey Weinstein sex abuse scandal and #MeToo movement.

Freeman pointed out the blue gong only recognises men in the acting profession.

“I wasn’t going to do this. I’m going to tell you what’s wrong with this statue,” he said.

“It works from the back, but from the front, it’s gender specific. Maybe I started something.”

Earlier, Freeman, 80, was stopped by a publicist from talking when he was asked on the red carpet about his thoughts on the current change in the entertainment industry.

Said a rep, “He was not here to talk about social issues. Not sure why was even asked the question in the first place.”

While stars at the Golden Globes wore black on the red carpet in recognition of stories of sexual harassment and abuse, the SAG Awards belonged to women with all 13 categories presented by female stars.

Host Kristen Bell spoke to gender equality in her opening monologue, saying it was a “watershed moment”, but still kept things light, adding she was “very excited” Frozen 2 was coming to theatres.

An emotional Nicole Kidman won her first Screen Actors Guild Award after receiving 10 nominations in her career for her role in Big Little Lies.

The best actress in a miniseries recipient said she had been working since she was 14 and the award “meant a lot”.

Keeping to an event that recognised women in the entertainment industry, the Australian actress rattled off a long list of actors for their “trailblazing” performances, including fellow nominees Susan Sarandon, Jessica Lange and Reese Witherspoon.

“How wonderful it is that our careers can go beyond 40 years old because 20 years ago, we were pretty washed up by this stage in our lives,” the 50 year-old said.

“We’ve proven – and these actresses and so many more have proven – we are potent and powerful and viable.”

Marisa Tomei and Rosanna Arquette, one of the first women to accuse disgraced producer Weinstein, also paid tribute to women who had spoken out during the #MeToo movement.

“We are inspired that so many powerful voices are no longer silenced by the fear of retaliation,” Arquette said.