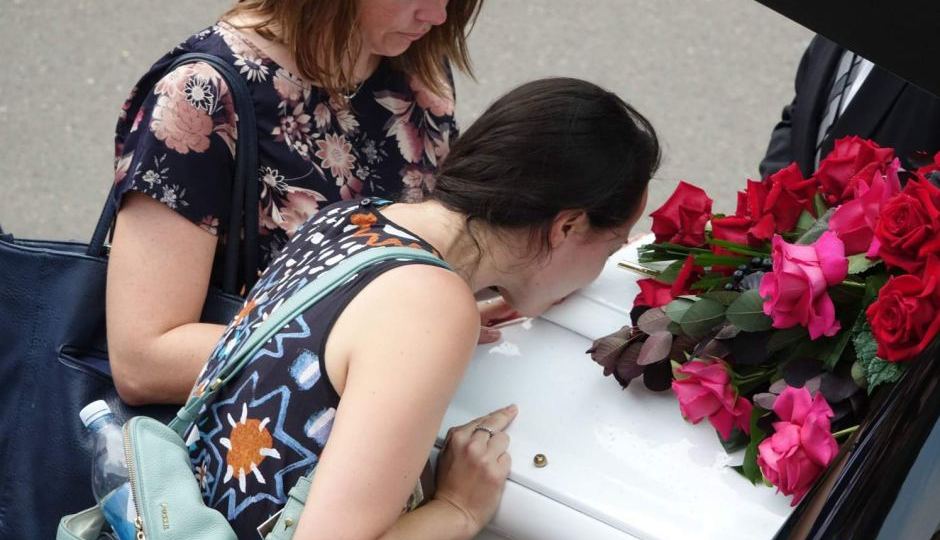 Twelve days after the funerals of her mother, father and younger sister, actress Jessica Falkholt has been farewelled by hundreds of mourners in Sydney.

The 29-year-old died last week after she and her family were involved in a horrific Boxing Day car crash on the New South Wales south coast.

She died at Sydney’s St George Hospital six days after her life support was turned off.

Her funeral is being held at St Mary’s Church at Concord, which is also where the funeral for her parents, Lars, 69, Vivian, 60, and sister Annabelle, 21, took place.

Lars and Vivian Falkholt were killed instantly in the fiery head-on crash, while Annabelle was critically injured and died three days later in hospital.

Paul Ponticello remembered his niece as “quickly becoming the centre of attention” of the large family and said her “determination and strength of character shone through as she clung to life for three weeks”.

“An entire family has been taken by events totally beyond their control that does not fit neatly into the definition of the word accident,” he said.

“We take comfort as she started to fulfil her dreams and immerse herself in her craft.

“Beautiful Jess you made us proud and you were a rising star. Shine bright, you will always be remembered in our hearts forever.”

Jessica Falkholt appeared in the long-running TV series Home and Away and the soon-to-be-released film Harmony.

Bond between sisters not meant to break

Her cousin Cathy Randazzo said Jessica was “vibrant, well mannered and kind-natured with a positive attitude to life”.

Ms Randazzo said she took comfort in knowing “[Jessica] had done everything she wanted to do”.

She also spoke of how close knit the family were and that she was a caring older sister to Annabelle – “a bond clearly not meant to be broken”.

Close friend Skye Kunstelj recalled meeting Jessica through the University of NSW Drama Society which led to a “decade of love, friendship and terrible plays” and that “her favourite person to make fun of was herself”.

“Jessica at her heart was a dork,” she said, and recalled her love of watching Keanu Reeves movies and eating her dad’s famous chicken.

All speakers recalled Jessica’s delight at being accepted into the National Institute of Dramatic Art (NIDA) in 2012, for three years that would change her life.

Police said the head-on collision which resulted in the Falkholt deaths was caused by one of the two cars involved being on the wrong side of the road.

The driver of the other car, 50-year-old Craig Whitall, also died at the scene on the Princess Highway at Mondayong, which saw both cars engulfed in flames.

The family has asked for donations to be made to Australian Cancer Research and has made special thanks to the staff at St George Hospital ICU for the care given to Jessica.

The requiem mass concluded with the release of doves in memory of the family.