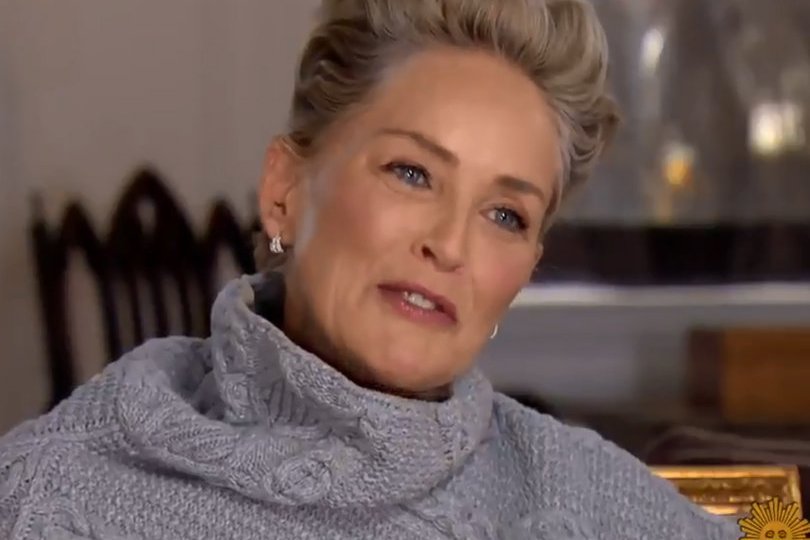 Sharon Stone burst into laughter when asked if she'd ever felt "uncomfortable" during her 40-year career. Photo: CBS

Leading lady Sharon Stone has all but confirmed she’s battled sexual harassment regularly throughout her 40-year career by laughing uproariously when asked if she’s ever been made to feel “uncomfortable” while working.

In a candid interview with US program CBS Sunday, the 59-year-old actress handled a probing question from interviewer Lee Cowan with humour and startling honesty.

Stone was speaking about the recent push for female empowerment in Hollywood following decades of entrenched sexual harassment, when Cowan asked her if she’d ever experienced harassment.

“I don’t know how to ask this in a delicate way, but were you ever in a position like that, that you felt that you were uncomfortable?” Cowan asked.

“You’re laughing, but I don’t know if that’s a nervous laugh, or an ‘are-you-kidding-me-of-course-I-was’ laugh?” Cowan asked with trepidation.

Stone then turned serious, responding, “Oh, I’ve been in this business for 40 years, Lee.

“Can you imagine the business I stepped into 40 years ago? Looking like I look, from Nowhere, Pennsylvania? I didn’t come here with any protection. I’ve seen it all.”

Stone was supportive of recent movements like #TimesUp and #MeToo which are allowing women to speak out in the face of harassment and seek personal and professional support.

“We were raised to accommodate men, particularly in my generation. And women so often lose their own identify to the identity of the men that they’re with,” she said.

“We’re starting to acknowledge our own gifts as women and not think that we have to behave as men in order to be empowered or powerful or valuable.”

Watch a clip from the CBS interview below

In the same interview, Stone opened up about a brain aneurysm that nearly killed her in 2001, almost destroying her career in the process.

“There was about a five per cent chance of me living. My whole life was wiped out. Others aren’t that interested in a broken person. I was alone,” she explained.

“I’m sure I seemed peculiar coming through this all these years, and I didn’t want to tell everybody what was happening because, you know, this is not a forgiving environment.”

Stone got her big break as a 22-year-old in the 1980 Woody Allen film Stardust Memories, before achieving sex symbol status for her notoriously revealing appearance in 1992’s Basinc Instinct.

After suffering several miscarriages because of a battle with autoimmune disease, Stone is now a single mother to three adopted sons, Quinn Kelly, 10, Laird Vonne, 12, and Roan Joseph, 17.

At this year’s Golden Globes, Stone walked the red carpet with Roan, both of them wearing black in solidarity with the #TimesUp movement against sexual harassment in the workplace.

Stone has been married twice, to producer Michael Greenburg for six years and to journalist Phil Bronstein, also for six years.

Sharon Stone’s powerful response to a question about sexual harassment