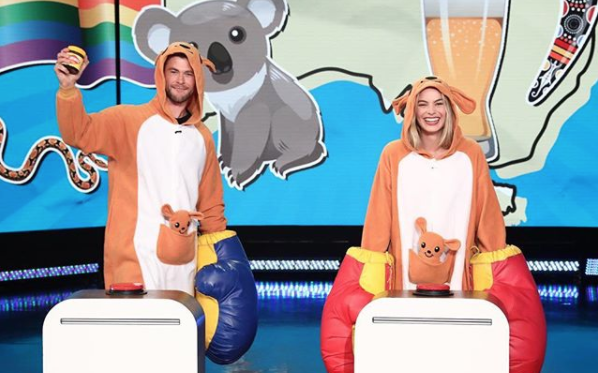 With a jar of Vegemite on the line, Margot Robbie and Chris Hemsworth duked it out in an Australian trivia game on The Ellen DeGeneres Show on Wednesday.

“Whoever gets the most right is the best Australian, besides my wife Portia de Rossi,” announced DeGeneres, 59.

Before a backdrop that included images of Hugh Jackman, a glass of beer, a rainbow flag and movie fish Nemo, Robbie and Hemsworth faced up to the first challenge: to name an Olivia Newton-John song.

Both missed out on Nicole Kidman’s birthplace (Hawaii) and Hemsworth almost flubbed the name of the kids’ TV series starring Robbie and his brother Liam, 27: “Ah, Animal, ah, Elephant Princess.”

The pair both did their best Crocodile Dundee impersonation and identified a photo of two Australian men who turned out to be wax figures of Chris and Liam.

“It’s supposed to be me. It’s a very hungover version of the two of us,” said the Avengers: Infinity War actor.

Robbie was put on the spot by DeGeneres and asked which Hemsworth she would choose, Chris or Liam.

He brought home the win by naming which of DeGeneres’s neighbours “may run for president in 2020”: Oprah Winfrey.

While he walked away with the title and the Vegemite, Hemsworth generously divided his spoils with Robbie, posting on Instagram that they shared a sandwich after the show.

Robbie – who didn’t wear the marsupial suit for the whole show – was also in a sharing mood.

She revealed insider details of how she ran into Degeneres and former US president Barack Obama under embarrassing circumstances on her honeymoon.

After marrying in secret in December 2016, Robbie and her new film director husband Tom Ackerley, 28, slipped away to a luxe Tahitian resort where they expected complete privacy.

Before hitting the gym on a rainy day, Ackerley put on what Robbie said were tiny old gym shorts.

“And they’re like really short and there’s nothing underneath so he gets on his bicycle to ride there and I’m like, ‘Whoa. Babe, you cannot wear those shorts’.

That would be DeGeneres, de Rossi and Obama, who was on the island working on his book.

All three were on treadmills at the gym.

“In a gym that is tiny! It was a very confined space.”

The “starstruck” pair introduced themselves then everyone joined a stretching class where Ackerley was urged by the trainer to lunge deeper.

He had to place a towel over his lap to preserve his modesty.

“He’s dying and I’m crying so much I’m about to crack a rib,” said Robbie.

“Ellen looks over and says ‘Boy, those were the wrong shorts to wear today’.”

At the end of the interview the talk show host gifted Robbie with a pair of long shorts to pass on to Ackerley.