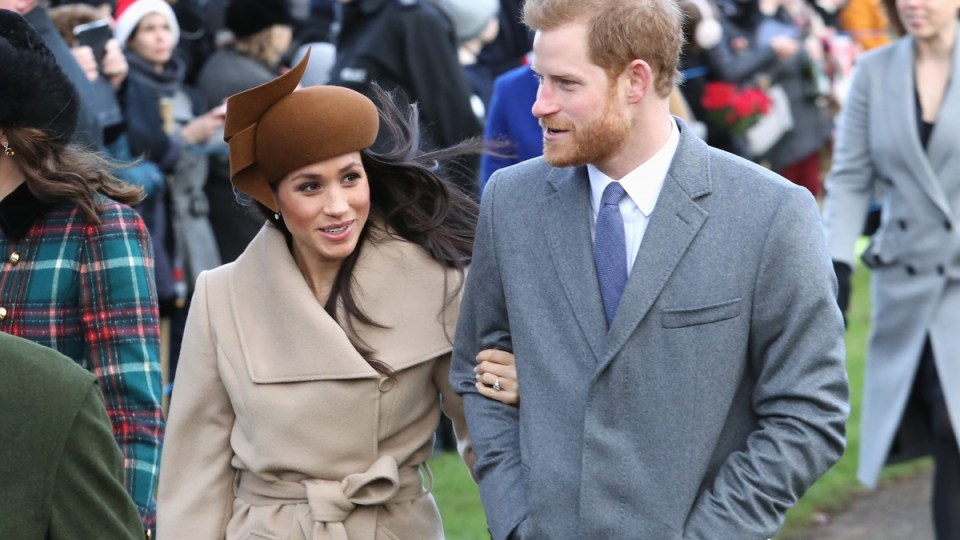 Meghan Markle and Prince Harry were arm-in-arm heading to church with the royal family on Christmas Day. Photo: Getty

With days to go before their second public appearance, Prince Harry and Meghan Markle are thought to already be back in London after a lightning trip to the south of France.

But while their everyday life is rich with fabulous perks – castles, staff, jewels – the newly-engaged pair’s first post-engagement trip wasn’t all five star.

Due to wed at Windsor Castle on May 19, Harry and Meghan flew economy class on a British Airways commercial flight to Nice on new year’s eve to ring in 2018.

They boarded the 9.55am flight before anyone else but with no first class section on the plane, they took the last row next to the toilets, according to UK media outlets.

While they had the privacy of a whole row of seats to themselves, Meghan, 36, and Harry, 33, were flanked by a trio of bodyguards.

My friend flew Prince Harry & Meghan Markle to Nice today! Apparently they sat at the back in economy. 🤔

Despite Harry wearing a baseball cap pulled low and Meghan a black beanie and “minimal makeup”, the pair was recognised by surprised fellow passengers.

“They sat at the back,” a source told People magazine.

“It was the morning flight from Heathrow. I guess they did it so that they could get on and off separately.”

According to local reports in Monaco Matin, things looked up after the two-hour flight, with the royal party whisked through a VIP area for a seven-minute helicopter flight to nearby Monaco.

They are said to have met up in the principality with friends for new year festivities, which included a fireworks display.

There was speculation the couple’s fellow revellers may have included Prince Albert and his wife Princess Charlene. The princess, a former Olympic swimmer, watched a rugby match at Twickenham last year with Harry.

“Monte Carlo is party central at this time of the year and the word is that the British royals really enjoyed themselves,” a source in the principality told the Daily Mail.

Harry and Meghan’s willingness to slum it on the flight didn’t extend to their accommodation arrangements, with reports saying they stayed at a luxe private house.

This is the second year running the pair has kickstarted the year with a cultural experience.

In the first days of 2017, they took a super private trip to the remote Norwegian town of Tromso, where they saw whales and the Aurora Borealis.

Their latest getaway was shorter, with Monaco Matin reporting they left the Côte d’Azur on January 2 at 11am.

The royals have a chequered history with the South of France. Harry’s mother Princess Diana holidayed in St Tropez with boyfriend Dodi Fayed weeks before their deaths in a 1997 Paris car crash.

In 2012, the Duchess of Cambridge was photographed sunbathing topless at a private château in Provence. She sued Closer magazine which published the photos, and won $120,000 in damages for invasion of privacy.

Meghan and Harry’s whirlwind trip is likely to have been happier, given they are mired in wedding planning and looking forward to what should be a marquee year.

The bride-to-be is hoping to “break a tradition or two” at the wedding, E! News reported a source as saying – including wanting her mother Doria Ragland to walk her down the aisle at St George’s Chapel.

Ms Ragland, a yoga teacher, was seen with Harry in Toronto in October but Meghan’s father Thomas Markle is yet to meet him.

In December, UK newspaper the Daily Mirror caught up with Mr Markle as he was “buying beer and cigarettes” in Mexico and asked if he wants to give away his daughter: “Yes. I’d love to.”

Harry and Meghan slum it on the way to France