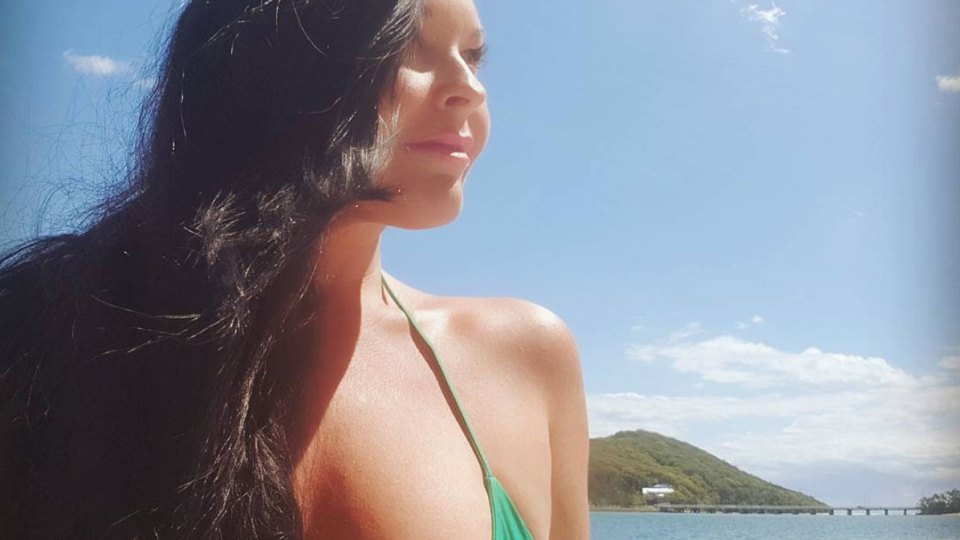 "I'd love to take you out for a feed and a beer," said one follower when Schapelle Corby posted a bikini shot to Instagram in November. Photo: Instagram

Schapelle Corby has rung in the new year with a surprise for social media followers: her first pop song.

The lyrics are simple and repetitive: “I’m in Queensland and it is sunny, there are palm trees behind me.”

Another verse says, “She’s back here to stay, she’s in the sunshine state, Schapelle is her name and she’s got something to say.”

In its first 18 hours after being posted on New Year’s Day, the song and accompanying photo montage of Corby, 40, enjoying her freedom in tropical climes clocked up nearly 54,000 views.

Others were not so generous. One of Corby’s 193,000 followers said it was “probably the worst thing I’ve heard” and a second critic claimed to be bleeding from the ears.

Ms Zeleny, 26, who is completing a masters of philosophy in music at the University of Adelaide, laughed off any criticism, invoking an infamous 2011 song as the litmus test of quality.

“I don’t think it’s as bad as Rebecca Black’s Friday,” she told The New Daily.

“I guess music is subjective. You either like it or you don’t. I really don’t take it personally. I don’t really care.”

#Repost @nat_zelz : So it's taken me a little while to upload it but this is mine and @schapelle.corby's song Palm Tree's. I wrote this in Cairns for a bit of a laugh and then took it into the studio to produce it and lay down our vocals. So much fun. 🤣☺️🌴😂 x #palmtrees #schapellecorby #music #studio #producer #musician #musicianlife #remix #queensland #iminqueensland #thisisqueensland @nat_zelz

Palm Trees was written in minutes last year when Ms Zeleny was in Cairns to do a wedding singer gig. Corby was on her mind after just being released.

“I write jingles sometimes for companies and I was messing around in my room,” she said.

“It was a sunny day and there were palm trees behind me, so I wrote about that, recorded a little video and uploaded it to Instagram.”

A week later, Ms Zeleny noticed Corby was following her on Instagram and had ‘liked’ some of her music videos, which sparked a social media friendship between the two women.

When Corby turned 40 in July, she marked the day – a milestone birthday and her first in Australia since her release – by recording her own version of Palm Trees and posting the video to Instagram.

“It got quite a reaction and she messaged me that we should make it into a ringtone,” Ms Zeleny said.

Instead, she headed into the studio for a day or two and “ripped the audio” from Corby’s video and added her own vocals.

“I laid down some piano and played in some synthesised instruments and really turned it into a little jingle.

“When Schapelle heard it she said, ‘I really love this and I want to post it on a special occasion.’”

Question is, is Corby any good at singing?

“Let me think about how to answer this one,” Ms Zeleny said.

“When you hear an advertisement, most of the time you’re not getting a Jennifer Hudson or Mariah Carey. You get a voice that is meant to be easy on your ears in the background.

“That’s what Schapelle has. She has a quality that is really perfect for being that background voice. It’s pleasant.

“I think she can hold a tune.”

The song collaboration is the highest-profile thing Corby has done since returning home to Queensland in May 2017 after nine years in Bali’s Kerobokan prison.

But while she has avoided media interviews, she has been active on social media.

An Instagram post showed she sat on Santa’s knee before Christmas, and after mowing her lawn on the first day of 2018, she told followers there are “active and productive times ahead for me.”

She included an inspirational message: “Don’t let people discourage you from what you visualise or talk you out of your creativity.

“If you have a colourful mindset, follow your passion and turn it into reality.”

Is Corby doing that herself? “In our communication, she’s always just been very happy and very nice,” said Ms Zeleny.