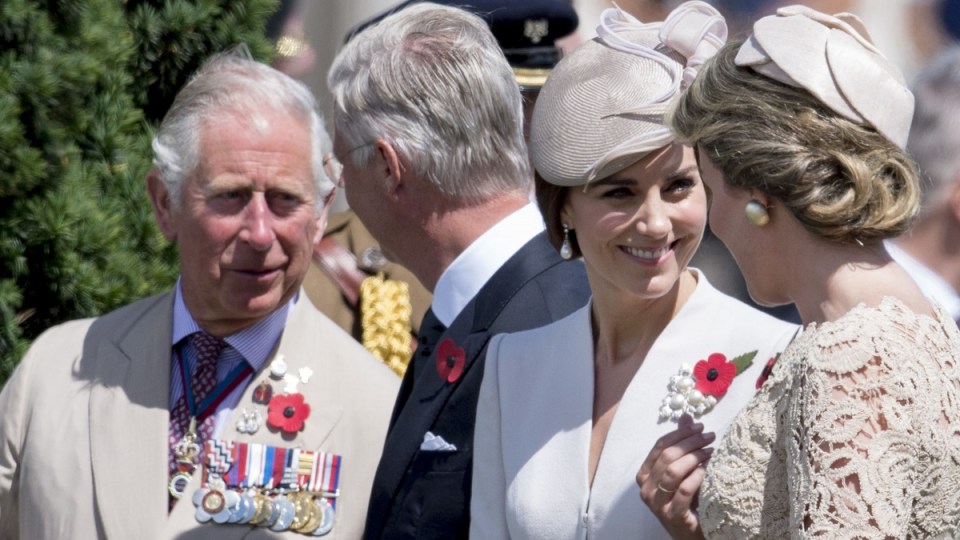 Busiest royal Prince Charles teamed up with the least busy, the Duchess of Cambridge, in France in July 2017. Photo: Getty

The Prince of Wales has a new title: hardest working member of the Royal Family.

But for the third year running, the Duchess of Cambridge was the working royal with the fewest UK engagements in her diary: 63.

She also made 42 official appearances overseas.

Charles nudged out his sister Princess Anne, 67, by just six engagements, although she did the most jobs in the UK, 455.

The Princess Royal’s domestic workload was heavier than the Duke of Edinburgh, the Duke and Duchess of Cambridge and Prince Harry combined.

Palace officials had billed 2017 as the year the younger royals – William, Kate and Harry – would take over Queen Elizabeth and Prince Phillip’s roles.

The Cambridges, both 35, moved from their Norfolk home Anmer Hall to Kensington Palace to chip in more.

But while Harry, 33, lifted his duties to 209 from 152 while conducting a long-distance romance with now-fiancee Meghan Markle, William (171 against 188 in 2016) and Kate cut back on theirs.

The duchess’s overall engagements were fewer than the Duke of Edinburgh, 96, despite his retirement from public life midway through the year.

Kate had been expected to do more appearances from September after Prince George started school, but severe morning sickness during her third pregnancy forced her to cancel some planned events.

She and William postponed a planned November tour of Sweden and Norway until early in 2018.

The Duchess of Cambridge, who had endless help and support with her children and the easiest job in the world, was sick for a couple of months and managed to be the laziest Royal yet again, but cleverly still got people to make excuses for her sorry ass!

Still, her work rate was slammed on Twitter, with some critics feeling that given Kate has staff and reportedly spent $160,000 on her wardrobe – her most expensive fashion year yet – she wasn’t handing tax payers best value for money.

One user slammed her as “the laziest Royal yet again”. Another said: “She’s lazy, pregnant or not. I have friends who are working mothers without help who managed to do more charity work than she does.”

Retired insurance broker Tim O’Donovan, 85, has compiled the figures for The Times for 37 years, based on an analysis of the court circular.

He warned individual royal performance should not be judged by the data alone.

“All engagements differ as to time and content and there is also the time taken in preparation, whether it be a visit investiture or speech.”

A total of 3628 engagements were undertaken by the 15 Windsor family members classed as working royals.

Due to marry Harry at Windsor Castle on May 19, Meghan, 36, kicked off her own stats with her first official engagement in Nottingham in December.

Preparing for her upcoming Church of England baptism and wedding means Meghan might not have gotten around to making New Year’s resolutions.

Not that she needs new ones: in January 2016, she said in a post on her now-defunct lifestyle blog The Tig that she usually makes the same resolutions.

“Run a marathon. Stop biting my nails. Stop swearing. Re-learn French,” she wrote, but added she’s yet to meet any of her goals.

“The marathon hasn’t happened. The swearing comes in lulls triggered by being overworked or feeling mighty cheeky after a couple drinks,” said Meghan.

Her high-school French “hasn’t stuck” nail biting “still happens with a turbulent flight or a stressful day. It’s unladylike. But then again, so is the swearing. Dammit.”

The busiest – and laziest – British Royals in 2017