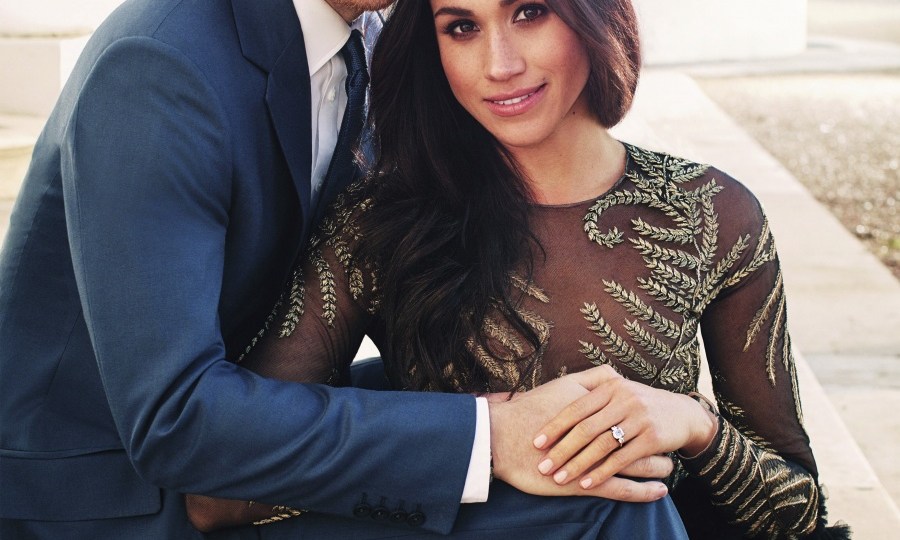 Prince Harry and fiancée Meghan Markle have given the public an intimate glimpse into their relationship with the release of their official engagement photographs late Thursday night.

The couple shared a series of portraits by New York-based fashion photographer Alexi Lubomirski, taken at Frogmore House in Windsor earlier this week, to mark their engagement last month,.

“As a way to say thank you, they have decided to share this candid photograph from the day of their portrait sittings directly with all of you,” Kensington Palace said in a statement.

“The couple are so grateful for the warm and generous messages they have received during such a happy time in their lives.”

In the first of three photos, Meghan is seen leaning on Harry’s leg as they pose on a set of stairs.

The former Suits actress, wearing a un-royal-like revealing black gown, shows off her engagement ring to the camera as she holds hands with Harry, who is sporting a blue suit.

Meghan’s partly see-through, full-length gown, made by Ralph and Russo, is another example of the American breaking royal tradition and is reported to have cost $US70,000 ($90,000).

The second image in black and white shows the couple nuzzled close together and laughing, with Harry appearing to wrap his jacket around his fiancée.

The third photograph shows Meghan and Harry embracing as they walk around the Frogmore Estate.

“It was an incredible honour to be asked to document this wonderful event, but also a great privilege to be invited to share and be a witness to this young couple’s love for one another,” photographer Lubomirski said in a statement from the palace.

“I cannot help but smile when I look at the photos that we took of them, such was their happiness together.”

As a way to say thank you, they have decided to share this candid photograph from the day of their portrait sittings directly with all of you. pic.twitter.com/MROyiKWEnG

Meghan and Harry, were joined by more than 50 members of the royal family on Wednesday, including the Duke and Duchess of Cambridge, Prince Charles and the Duchess of Cornwall, and Queen Elizabeth at the palace.

Harry and Meghan are due to marry on May 19 in St George’s Chapel at Windsor Castle.