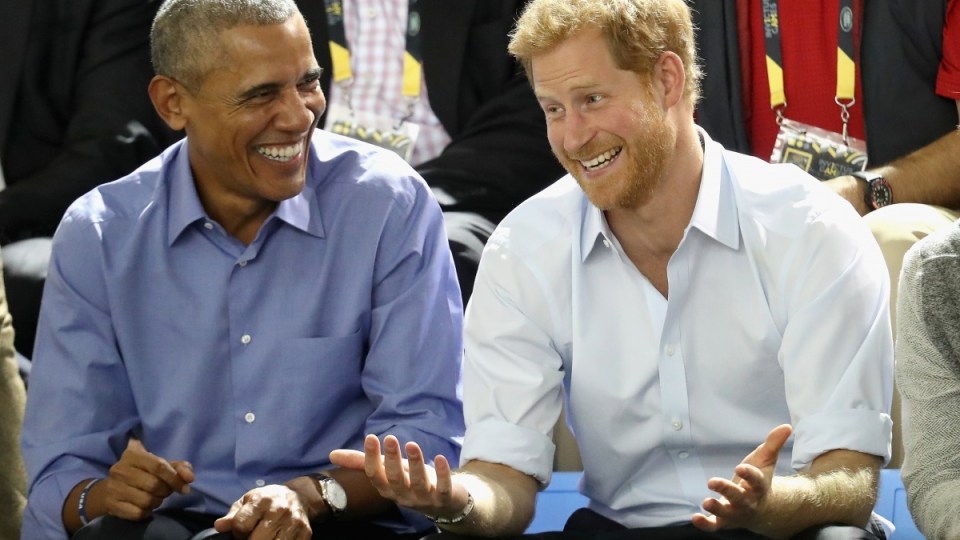 Prince Harry and Meghan Markle have not included world leaders on their wedding list. Photo: Getty

Prince Harry and Barack Obama have renewed their star-studded friendship in an interview for BBC radio 4’s Today program.

The pair’s longtime bromance was on full display as Harry interviewed the former US president, trading quips in a teaser released on Monday morning (AEST).

The interview, which was recorded in Toronto during the Invictus Games in September, features Mr Obama’s memories of the day he left office and his hopes for his post-presidential life as part of Harry’s guest editorship of the program.

In the teaser released by Kensington Palace, Harry outlines how the interview will proceed.

Here is a sneak preview of when @BarackObama met Prince Harry for the interview. Listen to the full interview on 27th December on @BBCr4today. pic.twitter.com/p5I1dUdyhx

“Do I need a British accent?” a jovial Mr Obama interrupts, asking whether he will have to speak more quickly.

Without hesitation the prince quips back: “No not at all, but if you start using long pauses you’re probably going to get ‘the face'” he says with a mock-stern face.

Mr Obama grins before responding: “I don’t want to see that face”.

Twiddling a pen, Harry tells Mr Obama: “You’re excited about this, I’m nervous about this, that’s what’s quite funny.”

Mr Obama replies: “I’ll interview you if you want.”

But Harry was not keen, replying: “No, no, let’s keep it this way.”

Kensington Palace said the conversation, which airs December 27, focuses on the pair’s “shared interest in building platforms for the next generation of young leaders.”

The Prince and the former president have enjoyed a relaxed, public friendship for years after becoming acquainted during the first Invictus Games in 2014.

Since Mr Obama left office, he has met Harry on several occasions, including a stop-over to Kensington Palace in May during his tour of Europe, and during his Foundation Summit in October.

The pair were seated next to each other at this year’s Invictus Games and were seen sharing a laugh as Mr Obama reportedly quizzed Harry on his relationship with Meghan Markle during a wheelchair basketball match.

“We wish you a lifetime of joy and happiness together.”

While the official guest list for the May wedding is yet to be finalised, the Obamas are expected to attend.

Last year, Obama and his wife, Michelle, posted a mock challenge to Harry on Twitter, telling him to “bring it” before the 2016 Invictus Games.

The Prince replied, with a video of himself and his grandmother, the Queen, where she simply says: “Oh really? Please.”

Unfortunately for you @FLOTUS and @POTUS I wasn't alone when you sent me that video 😉 – H.https://t.co/sjfSQvkzb6