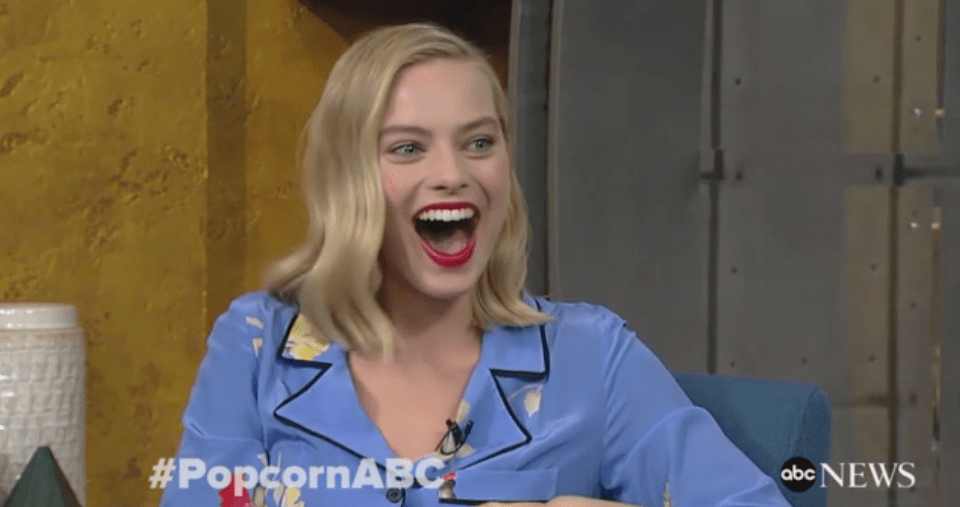 A stunned Margot Robbie learned of her latest accolade while the cameras were rolling. Photo: ABC News

Australian actress Margot Robbie has edged one step closer to winning her first Academy Award after learning midway through an on-camera interview that she had just been nominated for a Screen Actors’ Guild Award.

Nominations for the prestigious annual awards were released on Wednesday (US time), with Robbie scoring a nod in the ‘Outstanding Performance by a Female Actor in a Leading Role’ category for her turn as notorious US figure skater Tonya Harding in I, Tonya.

Robbie was taping an interview on US talk show Popcorn with Peter Travers when she was told of the exciting news.

As host Travers asked her a question, Robbie’s eyes travelled to the corner of the room where her publicist was sitting.

“Oh, my God! What?!” she said to someone off-camera with wide eyes.

“Congratulations,” Travers cut in, as a jubilant Robbie reacted to the surprise news.

Robbie’s co-star, Allison Janney, who plays Tonya Harding’s notoriously tough mother in the film, also nabbed a nomination for ‘Outstanding Performance by a Female Actor in a Supporting Role’.

“Thanks for telling me!” a thoroughly chuffed Robbie said. “Breaking news! That was, like, as immediate as it could be,” she joked of her shock reaction.

When Travers suggested an Oscar nomination could be on the horizon, Robbie responded: “Let’s not get ahead of ourselves, this is already too good to be true.

“When you make the film, you’re so worried about actually pulling it off and making it or even making the days or even getting everything shot so you can piece it all together to have a film that you kind of forget about the part when you show everyone and wait to see what they think.

I, Tonya has been something of a passion project for Robbie – she and her husband, Tom Ackerley, produced the film, and it’s one of the first major films produced by LuckyChap Entertainment, the production company Robbie co-owns with Ackerley and two other friends.

Robbie also had to train hard on the ice to portray Harding – the first woman to complete a triple axel in competition, but who became a pariah after she was implicated in an attack on fellow skater Nancy Kerrigan at the 1994 Olympic trials.

Robbie, who married Ackerley in Byron Bay in December 2016, even skipped her own honeymoon to film the biopic, loosely based on Harding’s rise and fall as a professional skater.

“We did this film instead of our honeymoon,” she told Extra.

The Queensland-born actress is up against some strong contenders in her category: Saoirse Ronan for the buzzed-about Lady Bird; Frances McDormand for Three Billboards Outside Ebbing, Missouri; Sally Hawkins for The Shape of Water and Judi Dench for Victoria & Abdul.

As for the equivalent male category, the men nominated for ‘Outstanding Performance by a Male Actor in a Supporting Role’ are: Timothée Chalamet for Call Me By Your Name; James Franco for The Disaster Artist; Daniel Kaluuya for Get Out; Gary Oldman for Darkest Hour and Denzel Washington for Roman J Israel, Esq.

Such a fun evening celebrating with the REAL Tonya Harding ⛸💖