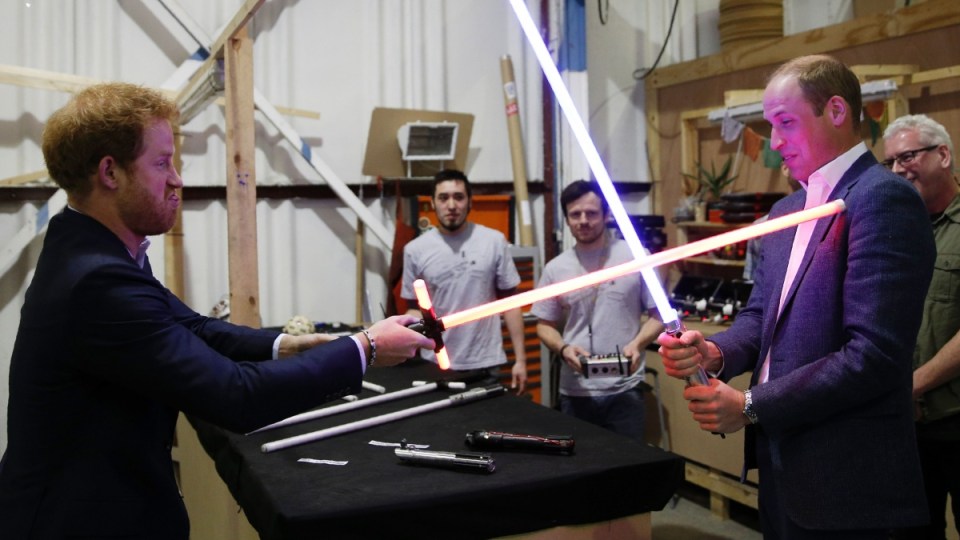 Prince Harry had a lightsaber clash with Prince William with a lightsabre on set in April 2016. Photo: Getty

Only when the lights go down on Tuesday at London’s Royal Albert Hall and the European premiere of Star Wars: The Last Jedi kicks off will Prince William and Prince Harry find out if they are to become the most famous fictional soldiers ever.

When they dropped by the set of the new movie at Pinewood Studios in England in 2016, both princes – mega fans of the sci-fi franchise – did more than muck around with lightsabers.

According to The Last Jedi star John Boyega, the pair found themselves being strapped into stormtrooper outfits to film cameos.

But they won’t know if they’ve made the final cut until they see the movie, which opens in Australia on December 16.

“They came on set. They were there. I’m sick of hiding it,” revealed Boyega, who plays Finn.

William and Harry’s shot at silver screen glory is said to involve them being stormtroopers inside a lift escorting Finn, Daisy Ridley as Rey and Benicio del Toro’s new character DJ.

One of the princes – and only they know which one – is said to give del Toro a slap on the bottom.

But as with other closely-guarded Star Wars plot twists, there are differing reports.

The Hollywood Reporter claims the royal brothers will definitely appear with singer Gary Barlow and actor Tom Hardy, all as stormtroopers.

In what may be becoming a Hollywood tradition, James Bond actor Daniel Craig reportedly played one in The Force Awakens.

What is definitely known is that William and Harry will meet members of the cast and crew including Ridley, Mark Hamill and Boyega.

The London event comes days after the December 9 world premiere at the Shrine Auditorium in Los Angeles of the eighth Star Wars instalment, which picks up where 2015’s The Force Awakens ended.

The premiere was the first time any group of more than eight people had seen the highly anticipated film.

Stars including Hamill, Ridley, Laura Dern and Lupita Nyong’o walked the red carpet, which was flanked by giant AT-M6 walkers, before an A-list audience of 2200 saw the first screening.

Ridley prepped for the night with wine and guacamole.

“I’m not going to lie, I’m proud of myself,” she said of her screen time.

“It’s nice seeing something that you worked so hard on, that it’s tangible, that you can measure. Because I’m like, ‘That fight’s cool’.”

Hamill, returning to his iconic role as Luke Skywalker after making a brief robed reappearance at the end of The Force Awakens, earned wild cheers when he was introduced onstage.

Carrie Fisher, who died in December 2016, was honoured by featuring on giant posters lining the red carpet and in the film’s dedication: “In loving memory of our princess, Carrie Fisher.”

Fisher, who first played Princess Leia in 1977, finished her role as General Leia Organa before her death last year.

Her absence was poignantly and subtly noted in a photo in The New York Times on December 8. Accompanying a roundtable interview with stars, the snap showed the cast with a physical space left in the middle for Fisher.

At the premiere, writer-director Rian Johnson looked to the sky before speaking about the late actress and her place in the movie.

“I’d like to dedicate tonight to Carrie,” said Johnson.

“I know she’s up there right now flipping me the bird, saying, ‘Damn it, Rian, how dare you bring the mood down and make this night a solemn tribute’.

“Let’s have a blast for Carrie.”

That happened as scripted, at an elaborate after-party in the Shrine’s Expo Hall, which was reportedly transformed into a Canto Bight casino.

Stormtroopers – not royal ones – patrolled the area, taking selfies with guests.

Formal reviews are embargoed until the release date but some of those at the screening shared their reactions online. Logan director James Mangold said The Last Jedi was “a great chapter of a blockbuster franchise, spectacular and unpredictable”.

As for what’s still to come, the next anthology movie Solo – revolving around Harrison Ford’s character Han Solo – is reportedly out next May, and there is buzz LucasFilm is planning to start shooting a new Obi-Wan Kenobi trilogy in January 2019.