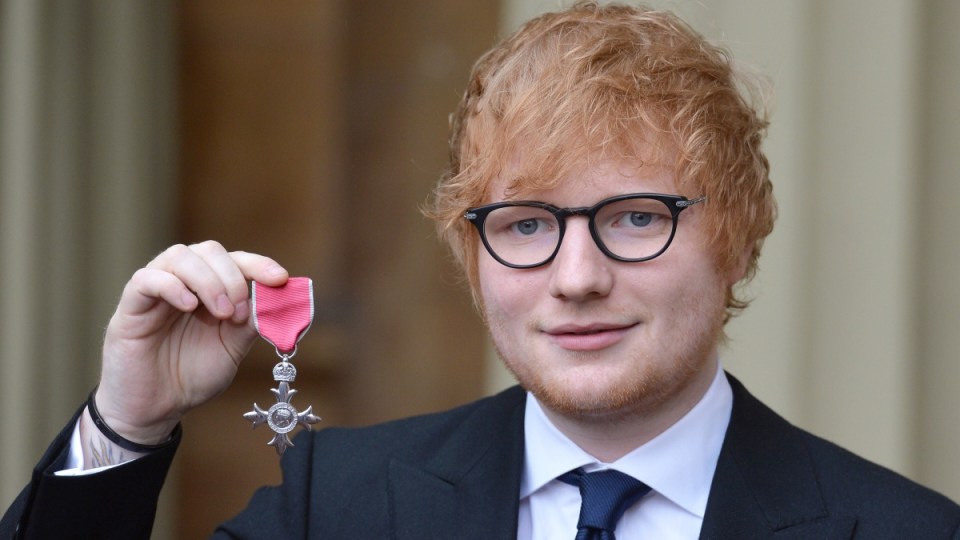 Ed Sheeran has received a Member of the Order of the British Empire. Photo: Getty

Pop star Ed Sheeran has been awarded a Member of the Order of the British Empire (MBE) medal for his services to music and charity.

The 26-year-old singer, who’s latest album Divided topped the charts in Australia, received the accolade from Prince Charles at Buckingham Palace on Thursday.

Sheeran was the most-streamed artist of 2017 and supports various charities, including the Elton John AIDS Foundation and the ONE Campaign.

Sheeran is  open to performing at the forthcoming royal wedding between Prince Harry and Meghan Markle.

Asked by reporters outside Buckingham Palace whether he would play wedding singer for the Royal couple if asked, he replied with a grin: “Yeah, why not”.

The Prince of Wales presented the medal to Sheeran and was reportedly impressed by the singer’s work ethic.

“He was asking me if I was still selling lots of records, and I told him I’ve got a concert in New York tomorrow. He was quite surprised I was flying after this,” Sheeran said.

Sheeran said he was thinking of his late grandfather Bill, who passed four years ago today, as he received the award.

He said Bill was a “massive loyalist” and would be “pretty proud”.

“He had all the commemorative plates and stuff, and he died on this day four years ago, so it’s actually quite a nice full circle thing, I guess he’d be pretty proud,” he said.

Sheeran said his secret to his success was persistence.

“I don’t have a vast amount of talent compared to other people, I think talent is like 30 per cent of it and persistence, drive and self belief are the other ones, which I guess are all the same thing,” he said.