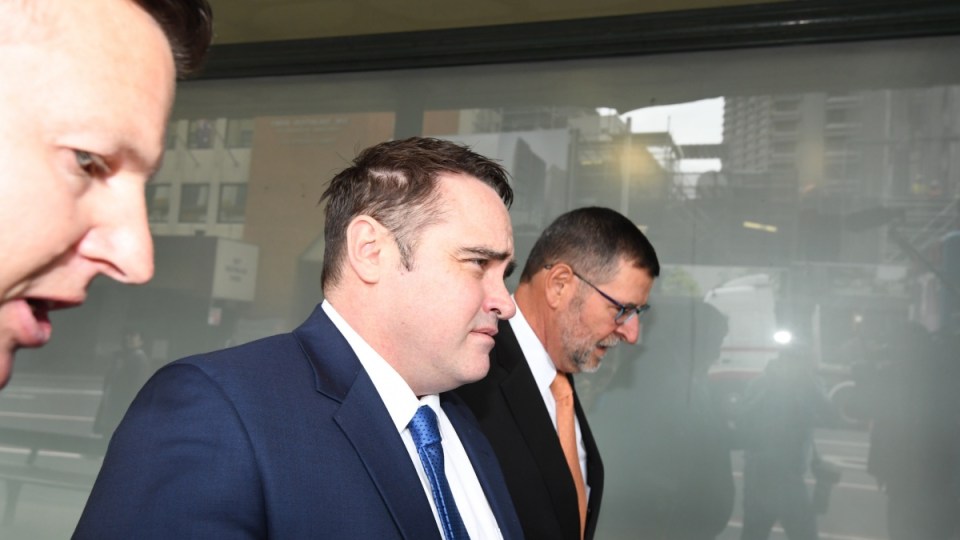 Former Channel Nine reporter Ben McCormack had a cup of saliva thrown over him while leaving court on Wednesday morning, after avoiding jail on child pornography charges.

As McCormack left the Sydney court, a man threw a cup of liquid containing his own spit at him, calling the former reporter a “filthy maggot”.

Court reporter for The Australian, Rhian Deutrom, reported that the man had spent more than an hour waiting outside the courthouse near the assembled media.

Witnesses reportedly had heard the man saying under his breath that he wanted “kill the grub [McCormack]”.

“That’s what happened to f–––ing me,” the man said as McCormack walked away, Mr Deutrom wrote.

The man has just made a hasty retreat after he was confronted by the media for throwing a cup full of his own spit at Ben McCormack. pic.twitter.com/PdQoAvDJ37

In September, the 43-year-old former A Current Affair reporter pleaded guilty to using a carriage service to promote child pornography.

McCormack avoided jail on the charges, receiving instead a $1000 fine and a three-year good behaviour bond.

McCormack was suspended in April from his role as a journalist on A Current Affair after he was charged with two counts of using a carriage service to transmit, publish or promote child pornography.

He exchanged explicit messages on Skype for almost two years with a man who was in Western Australia, but no pictures or videos were involved.

“Well before he was ever charged he acknowledged the wrongness and inappropriateness of his conduct and he sought professional help,” Judge Paul Conlon said at the Downing Centre District Court on Wednesday.

“All of the episodes of communication with others around this topic occurred when he was heavily intoxicated with alcohol.”

McCormack had explained that in 2005 he had met two children aged approximately nine and 11 years while doing a story about their father.

Judge Conlon said McCormack told his psychologist the meeting had triggered his awareness of his sexual attraction to preadolescent children.

“Eleven-year-olds are probably my ideal age,” McCormack told the psychologist.

McCormack was suspended from his role as a reporter at Channel Nine in April following raids at his home and the network’s Sydney offices. He later resigned from Nine.

Judge Conlon said there “were no videos, photos or images of pornography and there were no actual child victims” presented to court.

“[McCormack] said he had spent many hours fantasising about returning to his childhood and had a fantasy love affair with his best friend during his 20s which lasted for 10 years,” Judge Conlon said.

According to the agreed statement of facts, McCormack went by the name Oz4skinboi in conversations with young boys aged between seven to 12 years old.

He spoke with an unnamed man for more than two years via text messages and Skype that amounted to child pornography.

The pair watched pornography together and exchanged a number of images, which were not made available to the court.

The man asked McCormack during one July 2015 conversation whether he thought he’d always “be a p”, to which the reporter replied “Yep, U … I’ll always have the attraction … They are beautiful”.