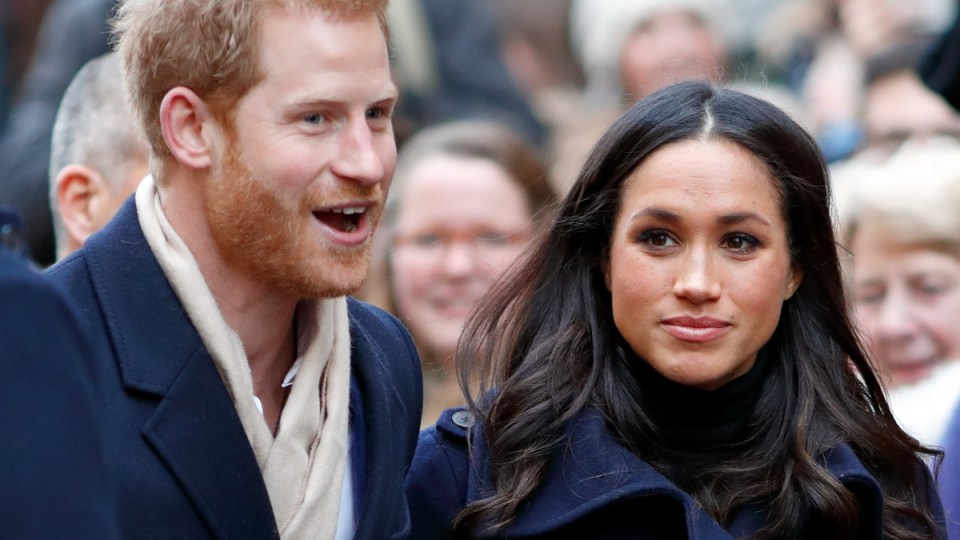 Prince Harry and Meghan Markle were loved up during their first official outing, in Nottingham on December 1. Photo: Getty

Last November, Meghan Markle hinted at her then-secret romance with Prince Harry with a cryptic Instagram post of two bananas spooning and the message “Sleep tight” (with two kisses).

The fruity feature resonated with Meghan’s 2.7 million Insta fans – and it’s now reported bananas will play a spotlit role in the newly engaged couple’s Windsor Castle wedding in May.

The pair plan to break royal tradition by ditching an old-school fruit cake, a source told The Daily Telegraph: “This will be the first royal wedding cake made from bananas.”

The significance is twofold: as well as being a social media symbol of the royal romance, bananas have long been Harry’s favourite fruit.

Former royal chef Darren McGrady, who cooked daily for Princess Diana and her boys when they were young, told Hello! magazine the prince “loved banana flan, anything with banana really, banana ice cream”.

Traditionally the top tier of a wedding cake is made from alcohol-soaked fruit to preserve it for the christening of the couple’s first child.

Sleep tight xx (Update: Thanks so much to those who shared the photo cred 🙂 I didn't know, and I love it! Credit where credit is due: I'm bananas for this @percxption) 🍌👍🏽

The Duke and Duchess of Cambridge bent but didn’t break protocol by having a groom’s chocolate biscuit cake plus a traditional eight-tiered one at their 2011 reception.

Darren Purchese and Cath Claringbold, the Australian husband-and-wife pastry chefs flown to Scotland by Ronan Keating to make the cake for his 2015 wedding, have volunteered to help out on the baked goods front.

“If Harry and Meghan want us, we will come,” Claringbold, who owns Melbourne’s Burch & Purchese Sweet Studio with TV chef Purchese, tells The New Daily.

“No one does traditional fruit cakes anymore, not in our world anyway.”

For Keating’s wedding to fashion designer Storm Uechtritz, Purchese – who has appeared on MasterChef Australia and is former head pastry chef at Melbourne’s Vue de Monde – designed a cake that came with 250 kilograms of handmade chocolate as an extra installation.

“We made edible garden flowers which I held onto as hand luggage for the whole flight – I had to put them through the security scanners in Dubai,” says Claringbold.

One of Burch & Purchese’s signature wedding cakes is a coconut, passionfruit, ginger and mint confection but Claringbold has a suggestion if Harry and Meghan are set on banana.

“I think they should get Darren to make them his famous caramelised white chocolate banana coffee cake,” she said.

Kensington Palace told The Telegraph it would not comment on speculation about the cake, but Harry’s communications secretary, Jason Knauf, said on November 30 the couple wants their wedding day to be “fun” and reflective of their relationship.

“This wedding, like all weddings, will be a moment of fun and joy that will reflect the characters of the bride and groom,” he said.

“The wedding will be a family event. You can expect the family to be involved.”

British media including The Sunday Times interpreted that as meaning Prince George, 4, and Princess Charlotte, 2, will reprise the pageboy and bridesmaid roles they played at their aunt Pippa Middleton’s wedding in May.

While many details will be released closer to the wedding, the one that will remain secret until the big day is who will make the bride’s dress.

The potential duchess – who called the Narciso Rodriguez sheath worn by Carolyn Bessette to her 1996 wedding to John Kennedy Jr “everything goals” – is expected to enlist a British designer, with Erdem and Stella McCartney among the edgier picks.

“Classic and simple is the name of the game, perhaps with a modern twist,” Meghan told Glamour of her style last year.

“I personally prefer wedding dresses that are whimsical or subtly romantic.”