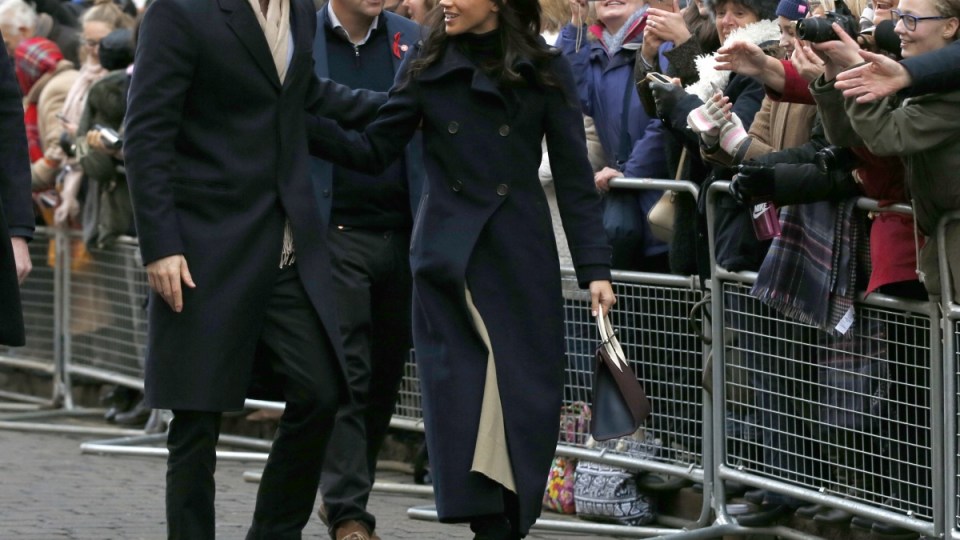 Showing just how confident she is with the spotlight, actress Meghan Markle aced being thrust into royal life just four days after her engagement to Prince Harry was announced.

An old hand at philanthropic duties thanks to her past experience as a UN Women advocate and ambassador for World Vision Canada, Meghan – with fiancé Harry beaming by her side – did a walkabout and visited an art gallery in Nottingham on Friday (local time).

Hundreds of well-wishers gathered in Nottingham to greet the couple and were not disappointed as the prince and his fiancée appeared determined to meet almost everyone on their first joint engagement.

In scenes reminiscent of the early days of the Duke and Duchess of Cambridge’s married life, a sea of camera phones greeted their arrival along with chants of “Harry, Harry” and “Meghan, Meghan”.

The couple, who arrived by train in matching long navy overcoats, broke usual royal protocol by walking hand-in-hand before draping their arms around each other’s waists.

A smiling Meghan wore a black turtleneck jumper and cream skirt with black boots, and kept her hair natural and loose.

Meghan didn’t look nervous, but the Suits star told the BBC during her candid post-engagement interview on November 27 that nothing could have prepared her for the laser-beam attention the royals deal with daily.

“There’s a misconception that because I have worked in the entertainment industry that this would be something I would be familiar with,” said Meghan, 36.

“But even though I had been on my show for, I guess, six years at that point, and working before that, I’ve never been part of tabloid culture.”

The Nottingham visit was hand-picked by Harry for Meghan’s debut, with Kensington Palace saying the prince wanted to introduce his wife-to-be to a “community that has become very special to him”.

Harry, 33, has visited the city eight times in five years on an official engagement— but never as a groom-to-be.

Meghan and Harry greeted wellwishers during a walk from a civic welcome at the National Justice Museum to the Nottingham Contemporary, an art gallery in the Lace Museum which was hosting a charity fair to honour World Aids Day.

Harry’s visit was planned some time ago but having Meghan along was an “extra delight”, Dominic Edwards, director of communications at the Terence Higgins Trust, told People.

Nottingham is the first stop on a tour of the UK for Prince Harry and Meghan, before they get married at Windsor Castle in May.

While she’ll gain a husband and title when she weds, Meghan is “regretfully” losing her own US and Canada-based charitable causes because she wants to “have a clean slate” and devote herself to her royal duties and UK issues, said Kensington Palace spokesman Jason Knauf.

The potential duchess has worked closely with Harry’s communications team to help her transition into the new role, according to reports.

“Meghan has had access to Harry’s most trusted aides since their relationship went public, so whether it’s advice on a business decision or handling a media issue, she’s been able to get advice whenever needed, and it’s been invaluable,” a source told Us Weekly.

As for Christmas plans, Kensington Palace said in a November 28 briefing that the couple is still sorting out their schedule, which will be announced in the coming weeks.

Said another source: “Knowing Harry, I wouldn’t be surprised if he jets off to L.A. at Christmas or around Christmas to spend time with her family.”