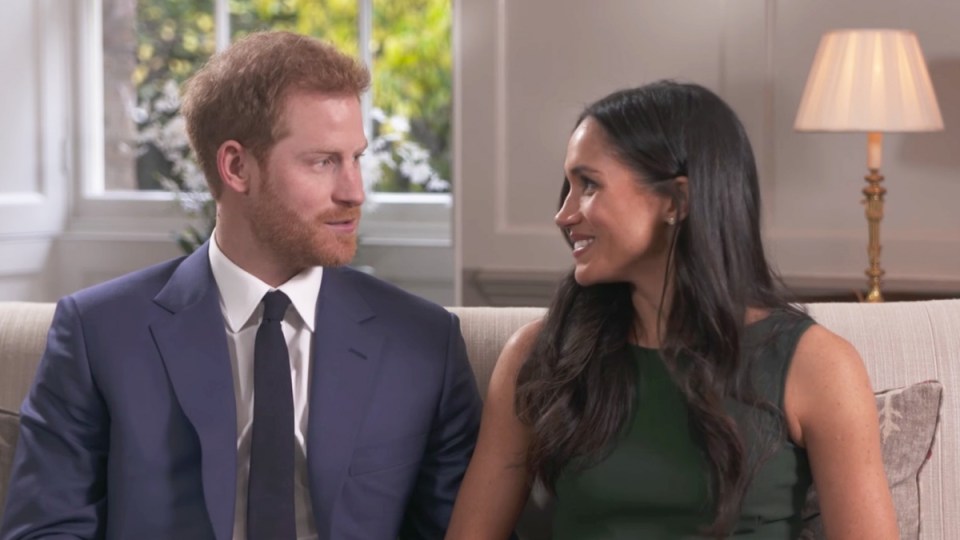 Prince Harry (with Meghan Markle during their BBC interview) said his fiancee "would have been best friends" with his mother Diana had she lived. Photo: Getty

As the world now knows, Prince Harry got down on one knee (“of course”) to propose to Meghan Markle while they roasted a chicken at their cottage in the grounds of Kensington Palace earlier this month.

But while he waited 18 months from their first meeting to pop the question, Harry “fell in love with Meghan so incredibly quickly – it was a confirmation to me that all the stars were aligned”.

As the prince put it: “This beautiful woman literally tripped and fell into my life. I fell into her life.”

Other members of the royal family who loved her at first sight?

“The corgis took to you straight away,” Harry recalled to Meghan.

The Duchess of Cambridge has also “been wonderful”, said Meghan, while Harry said his grandparents, Queen Elizabeth and Prince Philip, his father Prince Charles and his brother William have known how he felt “for quite some time”.

“So how they haven’t told anybody is a miracle in itself,” he joked.

The emotionally open recollections were part of a BBC interview the pair did hours after their engagement was announced on November 26.

Harry, 33, described the evening of his proposal at Nottingham Cottage as “just a standard typical night”. Until he produced a custom ring.

The proposal was “just an amazing surprise,” said Meghan, 36, who wore a dark green shift from vintage label P.A.R.O.S.H and Aquazzura heels for her first interview as a bride-to-be.

“It was so sweet and natural and very romantic.”

The Suits star was in such a rush to say yes that she forgot to check out the ring. “She didn’t even let me finish, she said, ‘Can I say yes?'” said Harry.

The ring is made from a giant diamond sourced in Botswana, where the couple first holidayed, and smaller stones from jewellery belonging to Harry’s late mother, Princess Diana.

Now that she’s had time to absorb the sentimental value of the ring, “it’s so important to me to – to know that [Diana] is a part of this with us”, Meghan said.

Harry said it was fitting his fiancée wears his mother’s diamonds because: “Oh they’d be thick as thieves. She would be over the moon, jumping up and down, you know so excited for me.”

But, he said, “it’s – you know it is days like – days like today when – when I really miss having her around and miss being able to share the happy news”.

Meghan chipped in: “She’s with us.”

The couple met on a blind date brokered by a mutual friend in July 2016. “It was definitely a set-up”, said Meghan, who claimed she “didn’t know much about” Prince Harry before their first date.

Meghan’s only question before she decided whether to meet Harry?

So, she said, they met for a drink, then “very quickly into that we said, ‘Well, what are we doing tomorrow?'”

Three or four weeks later, Harry invited Meghan to Botswana for five nights, and “we camped out with each other under the stars”, he said.

“We were really by ourselves. Which I think was crucial to me to make sure we had a chance to get to know each other.”

Between that trip and their engagement, Harry and Meghan never spent more than two weeks apart. They holidayed in the Caribbean, Norway and Africa, and spent time in London and at her rented Toronto home.

They made their first public appearance in September at the Invictus Games in Toronto and she declared her love for him in Vanity Fair, but the surest sign they were headed for the altar was Meghan meeting Queen Elizabeth over tea at Buckingham Palace.

To read a full transcript of the interview, click here.

That’s now happened “a couple of times”, said Meghan, who called it “incredible” because, “you know, to be able to meet her through his lens, not just with his honour and respect for her as the monarch, but the love that he has for her as his grandmother”.

While Meghan has left one of her rescue dogs behind “with very close friends” in Canada, she’s brought the “other little guy” to London.

It could be just the start of the couple’s family. When asked about children, Harry jumped in: “Not currently, no. Of course, one step at a time and hopefully we’ll start a family in the near future.”

When Harry met Meghan: ‘This beautiful woman fell into my life’