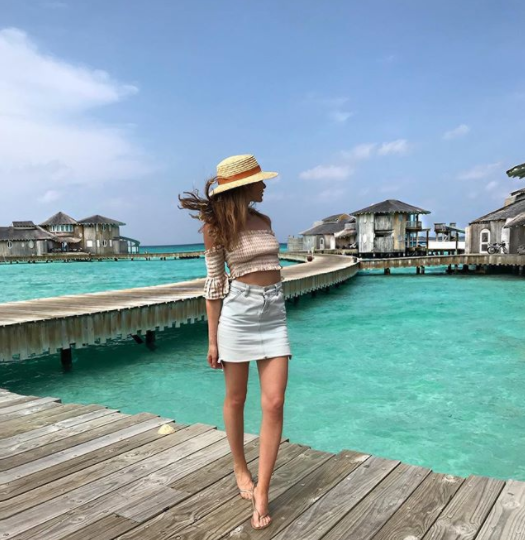 "After having Aston I honestly don’t care about the stuff I used to care about," Nadia Bartel told The New Daily. Photo: Instagram
analysis

First she has the nerve to be famously stylish, smart and married to an AFL Brownlow Medallist, then she takes a seven-day Maldives holiday with said husband—without her toddler, Aston.

Are you even serious, Nadia?

How fabulous, then, that randoms who don’t actually know you are not taking this lying down.

They’ve hoisted high their pitchforks and have marched – baying in unison – to stick the boots in on social media.

“Wow how do you guys do it?” sniped one follower who clocked the Bartels’ holiday on Instagram.

“I could not leave my kid behind and go on holiday.”

Chimed in another Instagram user who took umbrage at the childfree holiday: “Totally agree with you.”

What these people probably didn’t know before they decided to diss someone else’s personal choice and hoist their own onto moral high ground was that Nadia Bartel was anxious and torn about leaving her boy behind.

“I’m scared,” she told The New Daily on November 7 of their pending separation.

“It’s the longest we’ve ever been away from him.”

The fashion influencer, who left a career as a media sales executive to build up her own business, is such a mindful mother that she put off a second pregnancy knowing her trip was booked.

“I finally feel ready,” she told TND of new baby plans, but waited until after the Maldives because “there’s Zika virus there”.

She missed Aston so much in her first days away that she posted a snap of him with her father.

“Dying over the pics Mum keeps sending of Aston”, she wrote with the hashtag, “Miss him too much.”

The sad truth of this is that it may be nearly 2018 but it seems some things never get old – like having a crack at women for having a good time without their children.

While I’m pretty sure that Nadia would have mentioned in passing to Jimmy that Aston, who is nearly two, wouldn’t be coming to the Maldives, he didn’t cop any heat.

Like his wife’s, the three-time premiership player’s Insta feed featured snaps of him in a hammock, swimming and riding a bike without child in tow. They attracted comments no more violent than “Living the dream bro” and “Looks good big fella”.

Let’s go over the biology: when a woman gives birth, the baby becomes separated physically from her body.

It’s revolutionary stuff. It means she can, say, go to a movie without her baby. She can take trapeze classes. She can drink margaritas. She can sashay off to work. Because she no longer has the baby as part of her.

To those who publicly sniffed at the Bartels’ decision to holiday solo on the grounds that they personally never would, how unreal that you have the energy and money to take your kids everywhere.

There’s few things better than a family holiday. The caravan, the dog-eared Uno cards, the bikes tethered to the back of the station wagon. The mustering of children into plane seats. The memories.

But how would the people who only holiday with children feel if their own happy snaps were scoffed at by strangers who felt the need to say they personally don’t believe in family getaways?

The truth is that for kids Aston’s age, long flights can be disruptive and hard on them, and they can’t differentiate from being plopped down in the garden at home with a hose from being taken to an exclusive resort.

Then there’s the healthy longing couples have for some time off from the responsibility of a child.

Nadia told The New Daily that as a baby, “Aston didn’t sleep at all and only started sleeping at 18 months”.

Her response to her online critics was bitingly honest: “So you would never go on a trip without your baby? I miss him like crazy but I think it’s important to have time with just us too.”

Nadia Bartel: The truth about her controversial holiday without her son