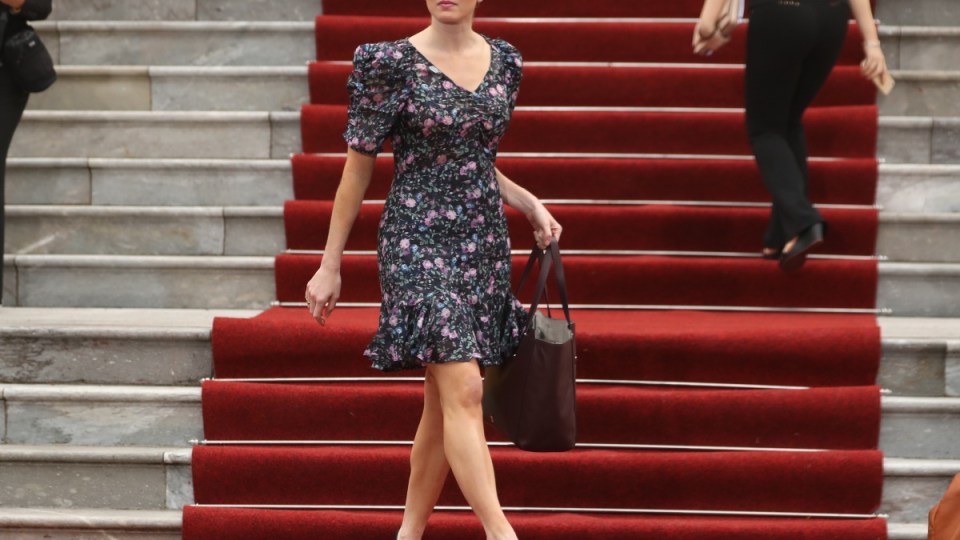 Even though Melania Trump showcased a reported $55,000 worth of dresses, coats and shoes – Dior, Fendi, Delpozo – on her husband’s 12-day tour of Asia, in the eyes of some style insiders the US First Lady was taken down in the fashion stakes by an unlikely source.

Also on the trip was White House communications director Hope Hicks, 29, whose edgy corporate-meets-couture approach to her travel style was next level. Said one media outlet: “It upstaged Melania.”

A former Ralph Lauren model, Ms Hicks chose her breakout moment with admirable chutzpah, breezing into a November 6 dinner at Tokyo’s Akasaka Palace in a high-fashion tuxedo paired with an oversized bowtie, a Kate Middleton-worthy blowdry and bold pink lip.

“She’s never stood out more,” said Vanity Fair of Hicks’ hefty dose of glamour, which made the night “look more like a scene out of Ocean’s Eight than a state dinner with Donald Trump”.

The result? Said the magazine: “A freeze-frame, ‘who is that?’ from the Tweeting public and tabloids alike.”

“The tuxedo is really cool. It looks really strong and powerful,” she told The New Daily.

“It’s an interesting choice for an occasion dominated by tuxedos anyway, but all on men – she brings a sexy, feminine look to it.”

She had never worked in politics before landing her job – and subsequent attention from The New York Times, GQ and Marie Claire – but brought with her a background in public relations.

Hicks’ greatest PR project right now is herself: in an administration led by a boss who can’t stop talking, she rarely speaks in public but what has been called her “bubble of self-anonymity” is being burst by her clothes.

Click through the gallery to see Hope Hicks’ looks 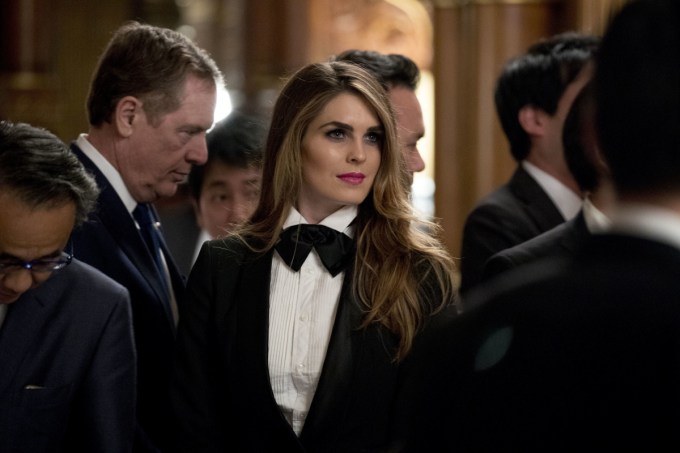 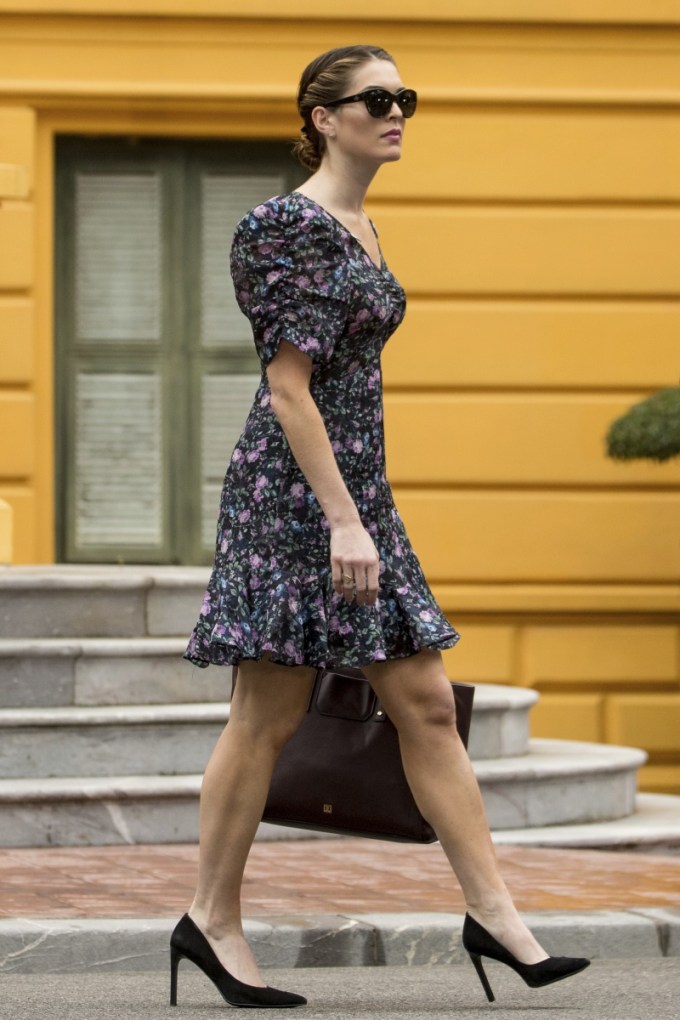 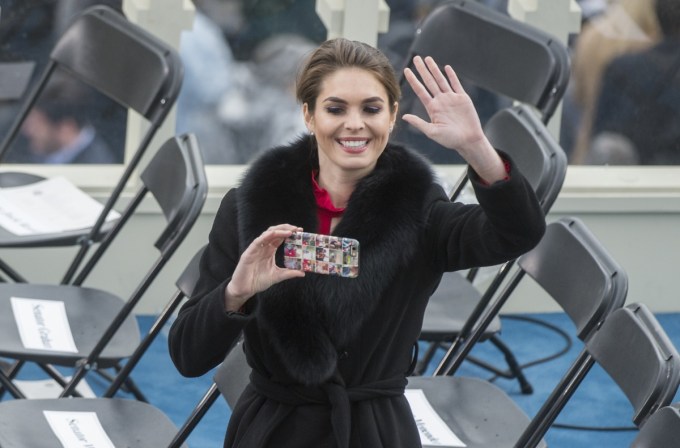 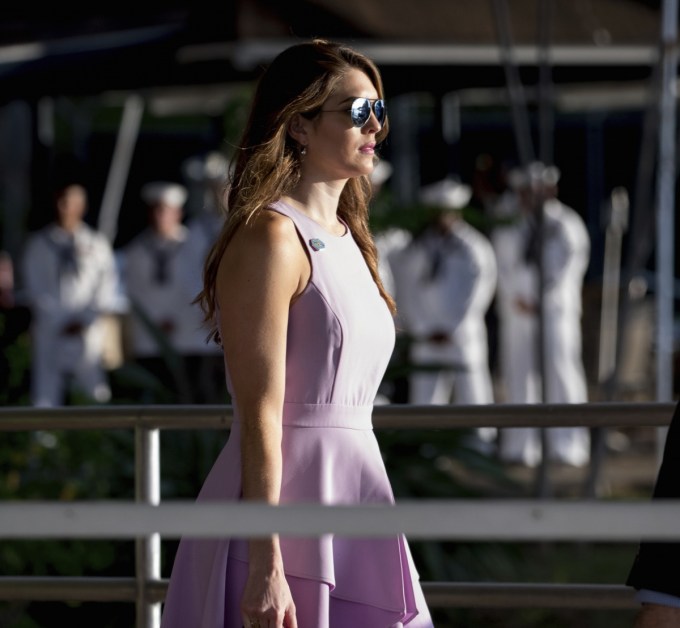 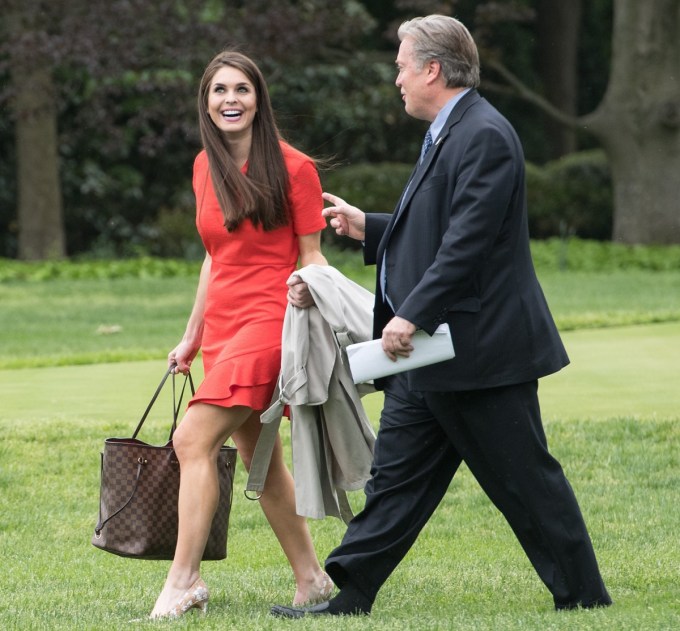 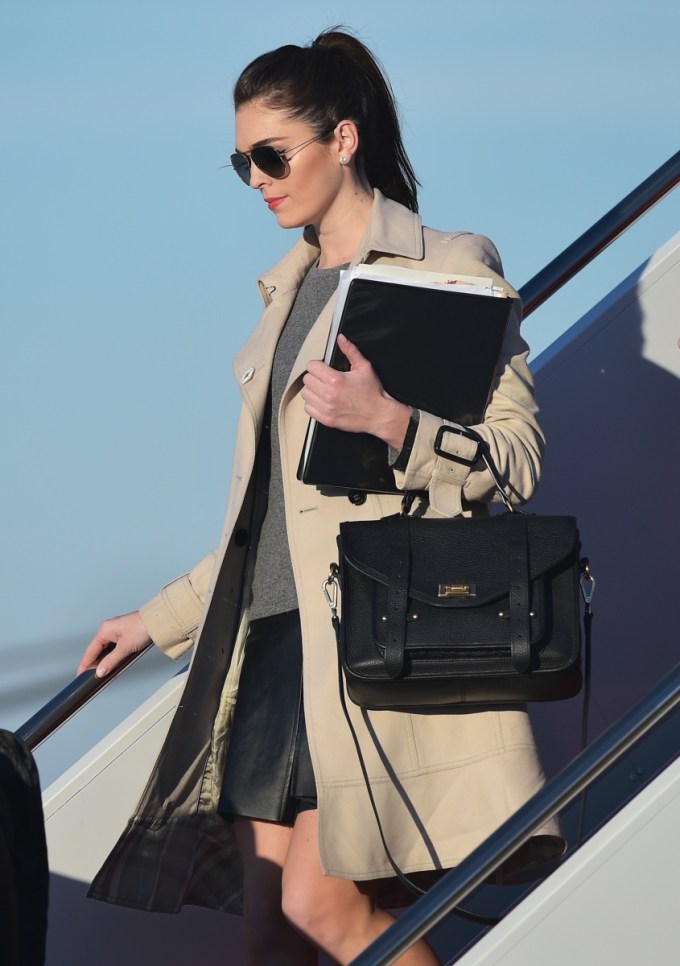 Covering up in a trench coat in February, 2017. Photo: Getty 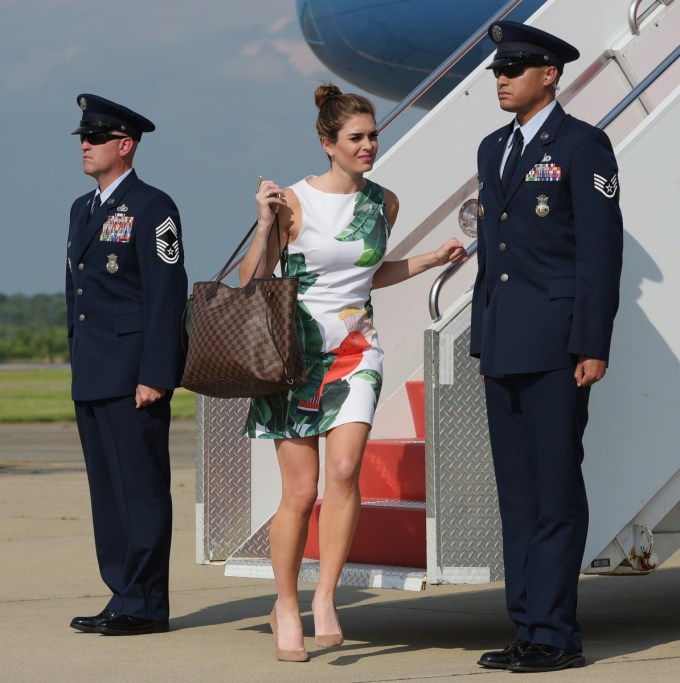 In a tropical mini dress in June 2017. Photo: Getty 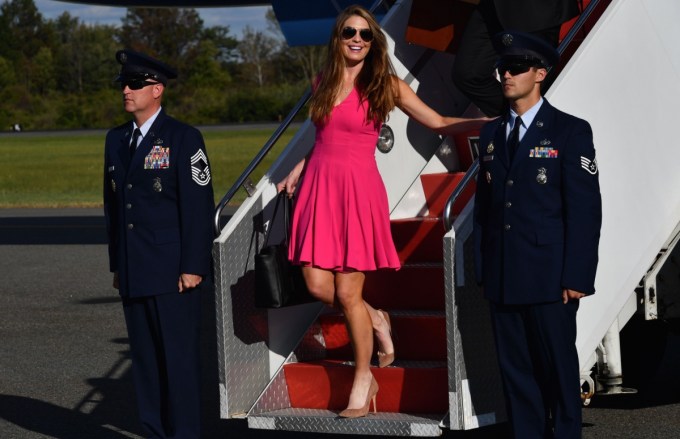 Making an entrance in eye-catching pink in New Jersey this September. Photo: Getty 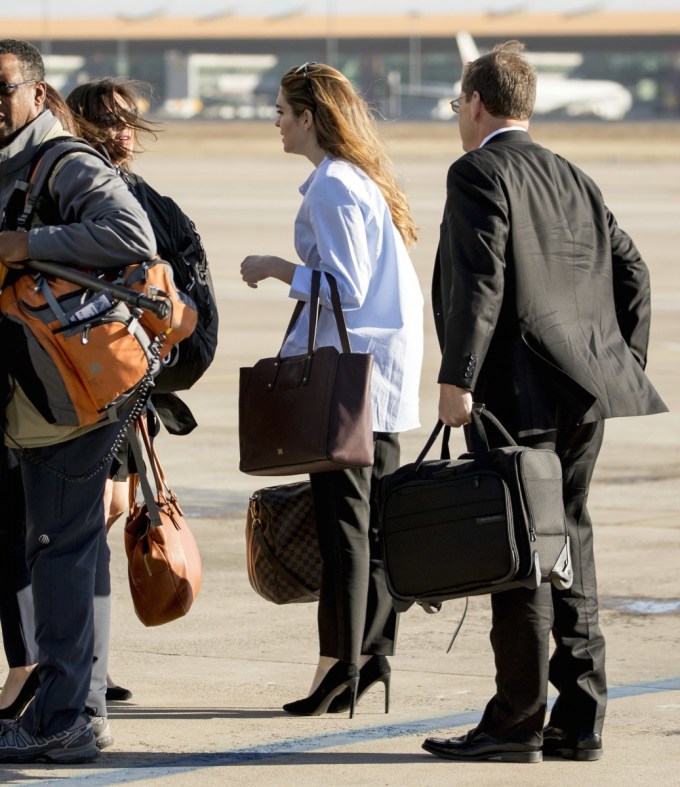 Dressed down in a men's business shirt in Beijing on November 10, 2017. Photo: Getty 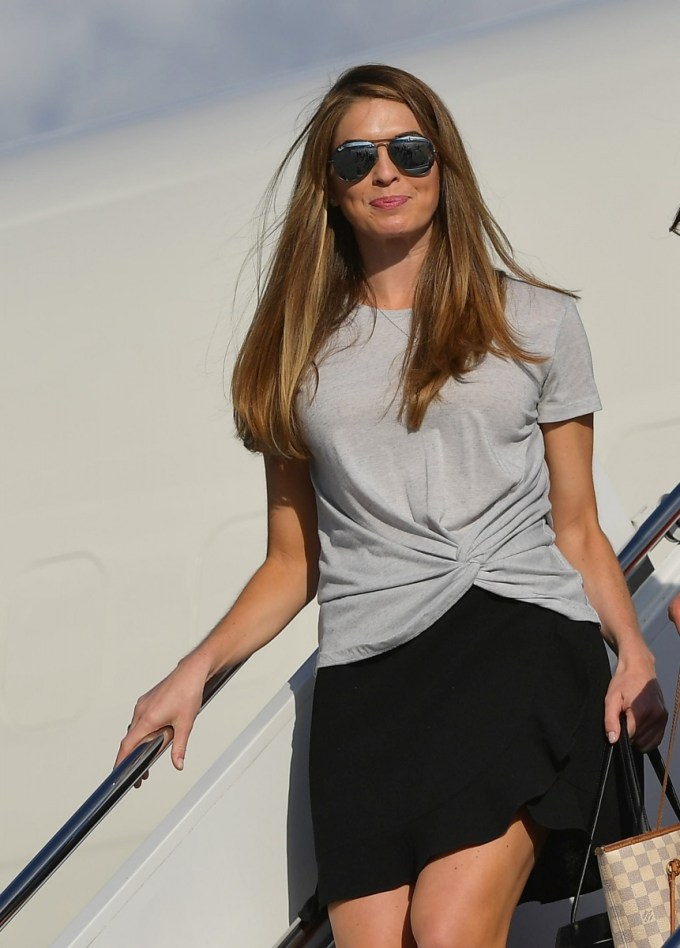 In a more casual look while disembarking Air Force One in New Jersey on September 15 this year. Photo: AAP 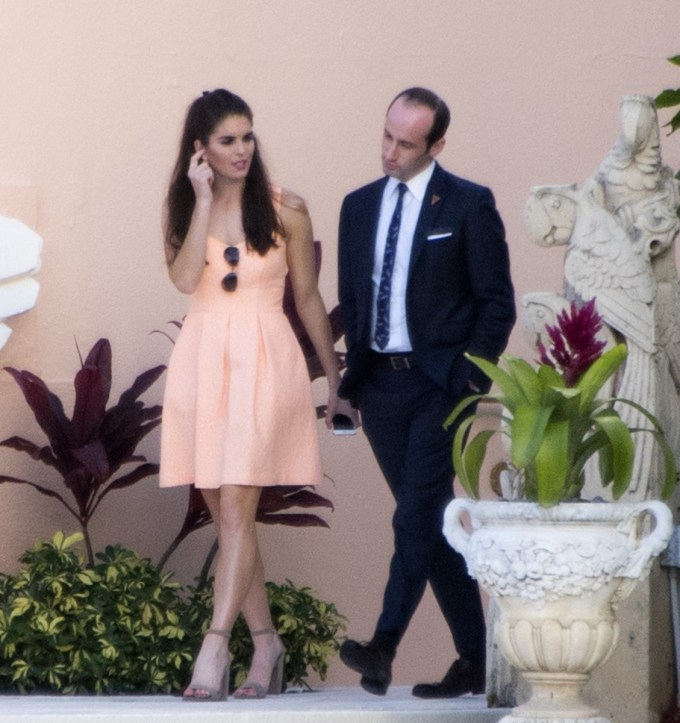 “Loved it,” said Eskander. “She made the dress more serious than playful by styling her hair into a slick bun.

“She has hit the mark and is doing a fabulous job at fashionable yet strong corporate looks.”

Hicks is such a rising star in the Trump visual firmament of luxe power dressing women that ‘Hicks Watch’ is becoming a real thing, even when she wears something ordinary.

Her ponytails have been analysed, her Louis Vuitton travel bag for an Air Force One flight cooed over, her hot pink dress for a Pearl Harbour tour praised.

Hicks herself said her polished everywoman style – called “ultra groomed, all-American” by The Telegraph – is born more from convenience than anything else.

“Dresses are easiest for me, especially on the road,” Hicks said in a 2015 blog post.

“I don’t have to think about pulling together an outfit. It’s one piece to put on, and then I’m out the door.”

The approach is working: “She’s hitting the brief, 100 per cent,” says Eskander.

“If I was styling her I would stick to subtle fashion statements like a red shoe with a neutral suit and a great designer handbag.”