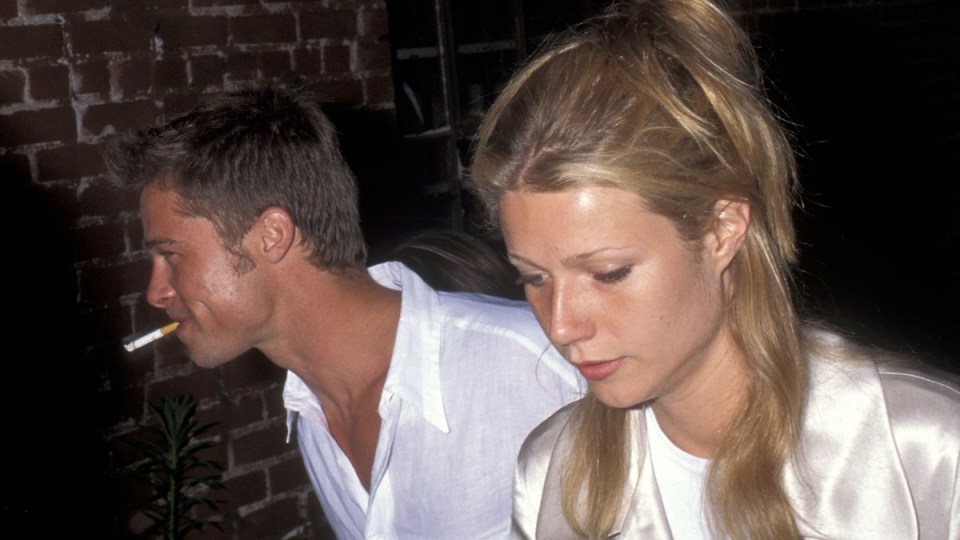 Brad Pitt and Gwyneth Paltrow in West Hollywood in 1995, around the time the actor took on Harvey Weinstein at a party. Photo: Getty

When his then-girlfriend Gwyneth Paltrow told Brad Pitt that studio boss Harvey Weinstein had made unwanted advances towards her, the actor went off script.

He didn’t keep quiet, as it now emerges much of Hollywood’s A-list did when it came to Weinstein’s alleged sexual misconduct.

“He’s one of the only men in Hollywood who stood up and said something,” a source told People. “That’s a fact.”

At a Hollywood party around 1995, Pitt confronted Weinstein and said he would bash him, in an incident he has confirmed to The New York Times did take place.

Pitt wouldn’t comment further, but “Brad threatened Harvey”, said the People source. “He got right in his face, poked him in the chest and said, ‘You will not ever do this to Gwyneth again’.”

The source said Pitt “made it absolutely clear this was not going to happen again, and it didn’t”.

A second source told Us Weekly Pitt “very clearly and strongly and unequivocally” confronted the movie mogul at the party, with the People source adding the actor told the studio boss if he tried anything again with Paltrow, he would give him “a ‘Missouri whooping'”.

Pitt, now 53, was “a young guy in Hollywood taking a chance”, said the source, and was “taking a big risk” by bailing up Weinstein.

The hotel room meeting that sparked Pitt’s threat of violence was described by Paltrow – one of dozens of stars who have accused the disgraced boss of harassment and abuse – to the New York Times.

Now 45, she said when she was 22 and had just been hired by Weinstein for the lead role in 1996’s Emma, he called her to his suite at the Peninsula Beverly Hills Hotel for a work meeting.

It ended, alleged Paltrow, with Weinstein touching her and suggesting they head to the bedroom for massages.

“I was a kid, I was signed up, I was petrified,” she told the New York Times.

She left immediately, and as she drove away was thinking, “‘I thought you were my Uncle Harvey’,” she recalled.

Paltrow later told Pitt and other close family members about the encounter, which led to Weinstein calling her.

“I thought he was going to fire me,” she told the paper. “He screamed at me for a long time. It was brutal.”

Paltrow, who won a best actress Oscar in 1999 for the Weinstein-produced Shakespeare in Love, now “feels relieved and pleased to have spoken out”, said the People source.

As for Pitt, he did Inglourious Basterds in 2009, which Weinstein executive produced, because “of his relationship with Quentin Tarantino and had nothing to do with Harvey”, said the source.

The actor’s second wife Angelina Jolie was just as unforgiving, refusing to be affiliated with any Weinstein project after a “bad experience” she had with him in the late 1990s that she recalled to the New York Times.

“As a result, [I] chose never to work with him again and warn others when they did,” Jolie, 42, said in an email to the paper.

“This behaviour towards women in any field, any country is unacceptable.”

Since the New York Times’s allegations that Weinstein, 65, initiated “unwanted physical contact” with multiple actresses and employees, he has been fired from his production business The Weinstein Company.

On Wednesday his wife, fashion designer Georgina Chapman, 41, left him, saying: “My heart breaks for all the women who have suffered tremendous pain because of these unforgivable actions.”

After lengthy allegations made against Weinstein in the New Yorker, a spokesperson for him said: “Any allegations of non-consensual sex are unequivocally denied by Mr Weinstein.”

The spokesperson said Weinstein had begun counselling, and “is hoping that, if he makes enough progress, he will be given a second chance”.