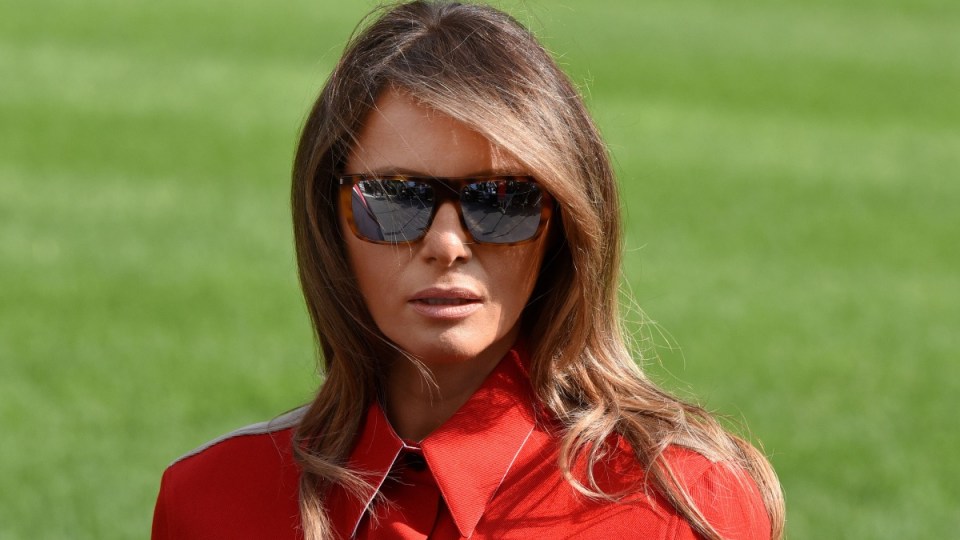 Melania Trump is unhappy with the wording of a billboard featuring her image. Photo: Getty

Trailing a few steps behind her US President husband on Tuesday, Melania Trump made a businesslike entrance to the United Nations General Assembly.

The First Lady kept one hand in the pocket of her Calvin Klein pantsuit, worn with her signature black heels. As her go-to shoe designer Manolo Blahnik told Harper’s Bazaar, Mrs Trump is all about her image: “She’s working non-stop to make it work.”

To that end, the same day she was hitting diplomatic circles, Mrs Trump 47, was also directing how she’s publicly perceived.

Specifically, she called in the lawyers to go after a Croatian language school which used her image as part of a marketing campaign.

Through her lawyer, the First Lady reportedly threatened to sue over five billboards in Zagreb, Croatia, showing her in front of an American flag.

The accompanying text? “Just imagine how far you can go with a little bit of English.”

Mrs Trump is reportedly sensitive about her distinctive Slovenian accent, which inspired model Gigi Hadid to crank out a Melania impersonation when she hosted the 2016 American Music Awards in November.

“Don’t be fooled by her accent. Melania is bright and articulate,” he told the New York Post. “To be clear, our First Lady speaks multiple languages, I believe five.”

While she hasn’t had much chance to showcase her linguistic skills since her husband’s inauguration, Mrs Trump had a crack last Friday when she introduced her husband at an event in Maryland.

But her words were overshadowed by the President’s reaction to her calling him to the stage. He gave his wife a rather stiff, business-like handshake before guiding her stage left, telling her to “go sit down”.

The exchange tickled comedian Jimmy Kimmel, who said Mr Trump “shut her down like a robot from Westworld”, referring to the hit drama about a theme park inhabited by lifelike robots.

The drama was real in Zagreb, where Mrs Trump’s lawyer Natasa Pirc Musar demanded the American Institute remove the billboards.

“I’m satisfied with the fact that the school admitted that they violated the law and that they are ready to remove the billboards,” Pirc Musar told The Associated Press.

​Ivis Buric, a spokeswoman for the American Institute in Zagreb told The Chicago Tribune the advertising campaign was not supposed to make fun of Melania, but to show she “had a lot to do”.

“We are very sorry that the billboards were misunderstood as something intended to mock the first ​lady,”​ Buric told The AP.

Admitting the short campaign was “very successful” because of the global publicity it generated, Buric said, “it was meant to be something positive, to show her as a role model.”

The law firm was hired by Mrs Trump, a native of neighbouring Slovenia, to protect her image, which has been linked to cakes, underwear and tourism.

In November, the firm fired a warning shot across the bows of locals in Mrs Trump’s hometown of Sevnica, who tried to cash in by using her face on merchandise.

That was small beer compared with the lawsuit she launched against the publisher of the Daily Mail in Britain and New York after it ran a story questioning elements of her former modelling career.

In April, the news outlet apologised and agreed to pay damages reportedly worth about $3.7 million.