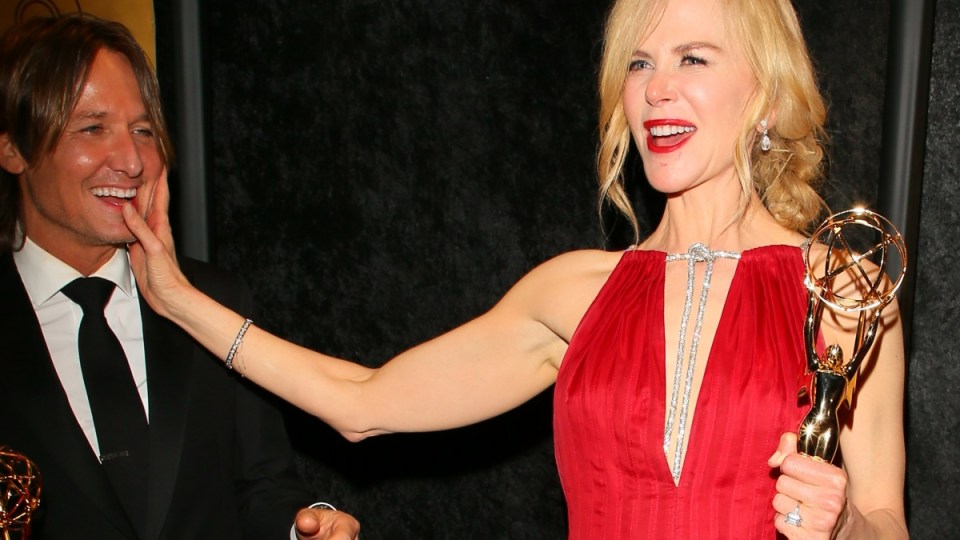 Does this look like a couple in trouble? Keith Urban and Nicole Kidman celebrate her Emmys triumphs. Photo: Getty

Making her way to her table at HBO’s Emmys after-party, Nicole Kidman greeted a swarm of well-wishers, her husband Keith Urban holding her hand (and, for much of the night, her clutch).

So popular was she, that on arrival one guest was asked: “Are you here for the Nicole Kidman circus?”

The lady herself plonked down at a banquette, fed Urban hors d’oeuvres, sat-danced, and, according to Vanity Fair, “judging by the sheer flashbulb density surrounding her, Kidman was the big little belle of the ball” at the Pacific Design Centre, Los Angeles.

Yes, she was. During her most successful professional year in a long time, Kidman, 50, owned Hollywood’s annual celebration of all things television.

Her passion-project, Big Little Lies, (she was executive producer as well as star) won five gongs, including Kidman’s for Best Actress in a Limited Series or Television Movie.

As she and Urban, 49, left the party, the actress was besieged by famous admirers asking for selfies, and she “obliged in all cases”, said Vanity Fair, who noted Kidman described the night with two words: “A dream.”

But by the time she woke the next morning, the dream was more of a nightmare, with Australian media stories labelling her “nutty” and “crazy”.

She was slammed for everything from her deliberately mismatched Calvin Klein sandals to her heartfelt, polished acceptance speech and her 11-year marriage to Urban.

Kidman’s theatrical kiss on the lips with co-star Alexander Skarsgard when he won an Emmy, was decried by the Daily Mail as “hardly out of character”.

Said the news site: “Skarsgard was not her first full-on snog – not by a long way. She’s also locked lips with actresses Elle Fanning and Naomi Watts.”

Kidman’s alleged foibles were rattled off, including clapping “like a seal” at January’s Golden Globes, and picking pizza crumbs out of her Alexander McQueen dress at an after-party.

“And let’s not even mention her flicking a V-sign at photographers during the Cannes Film Festival,” mentioned the story.

More immediately, Kidman’s speech – during which she shone a spotlight on the “complicated, insidious disease” of domestic violence – was instantly dissed on social and mainstream media.

Thanking “my darling Keith”, she hoisted her Emmy and said she wanted their daughters, Sunday, 9, and Faith, 6, to have it on their shelf, “and go, ‘Every time my mama didn’t put me to bed, it’s because of this’.”

Twitter lit up with complaints that Kidman didn’t mention her adopted adult children Isabella, 24, and Connor, 22, in her anecdote about bedtime stories.

“Guess Nicole Kidman forgot she had four children, not two,” said one tweet. Noted another: “Pretty crappy to only mention 2/4 of your children.”

Another tweeted: “Nicole Kidman has four children. That’s not weird that she didn’t mention two of them, right? Right. They’re cool with it.”

Probably they are. Isabella is a married hairdresser who lives in London and is way past missing her mother when she’s on set. Connor is a DJ and actor who is close to his father, Tom Cruise.

Not everyone was a hater. The Huffington Post called the speech “absolutely perfect” and The Australian called for a round of applause for Kidman.

Lucy Thackray, a producer at Seven’s The Morning Show, tweeted: “Nicole Kidman is the EP of a miniseries that just won five Emmy awards, including her best actress performance.