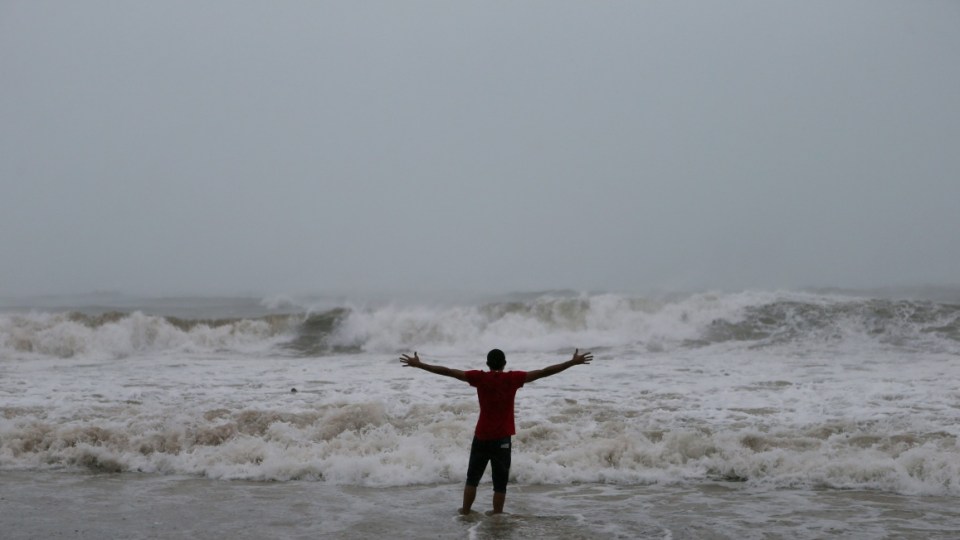 A man stands on a beach in Puerto Rico before Hurricane Irma hits. Photo: Getty

Hurricane Irma, one of the most powerful Atlantic storms in a century, ripped through the Caribbean islands with tree-snapping winds, drenching rains and pounding surf on a collision course with Florida.

At least seven people were reported killed across several islands by Irma on Wednesday (local time), which weather forecasters say was a “potentially catastrophic” Category-5 storm, the highest possible category.

The dual-island nation of Antigua and Barbuda was especially hard hit.

The northern-most island, Barbuda, home to roughly 1800 people, was “totally demolished,” with 90 per cent of all dwellings levelled, Prime Minister Gaston Browne said, according to island television broadcasts, with one person confirmed dead.

A second storm-related fatality, that of a surfer, was reported on Barbados, and the French government said at least two people were killed in Caribbean island territories of Saint Martin and Saint Barthelemy.

Horrible MT @La1ere.fr #StMartin is a field of ruins after #IRMA as shown by these 1st images of @guadeloupe_1ere pic.twitter.com/dFCcHBrcSG

Irma, with top sustained winds of 300kp/h, was on track to reach Florida on Saturday or Sunday, becoming the second major hurricane to hit the US mainland in as many weeks.

Irma’s intensity and course could change, but the storm is expected to remain at least a Category 4 before arriving in Florida.

Two other hurricanes formed on Wednesday, with one, Hurricane Jose, about 1610km east of the Caribbean’s Lesser Antilles islands, to threaten the US mainland.

Irma, with top sustained winds of 300kp/h, is on track to reach Florida on Saturday or Sunday, becoming the second major hurricane to hit the US mainland in as many weeks.

Hurricane Harvey claimed about 60 lives and caused an estimated $US180 billion ($A225 billion) in damages after slamming into Texas and Louisiana last week.

Meanwhile in Florida, emergency management officials have begun evacuating people, with all tourists ordered to leave the Florida Keys.

A fly-through of Hurricane Irma

Cuba is also on hurricane alert with Havana residents queuing for food, water and petrol.

As Hurricane Irma roared towards Necker Island, his private idyll in the British Virgin Islands, billionaire Richard Branson rode out the chaos by bunkering down in his wine cellar.

With about a dozen Virgin Group staff members to keep him company – some “lovely guests” were evacuated ahead of Irma’s arrival – Branson headed for the concrete cellar under his mansion, known as the Great House.

“Knowing our wonderful team as I do,” he wrote in a blog. “I suspect there will be little wine left in the cellar when we all emerge.”

Branson, who bought Necker for $US180,000 ($A225,000) in 1979 and has reportedly survived four previous Caribbean hurricanes, kept the world posted to his ordeal via social media posts.

About five hours before the “full force” of the hurricane’s 300kp/h winds hit – that wind force was maintained for more than 24 hours, a record length of time – Branson described in the blog the atmosphere as “eerie but beautiful”.

Branson posted pictures on his Instagram and Twitter accounts showing the room he and his staff stayed in, with camp bunks pushed together.

Playing dice game Perudo on a dining table as they waited out the “howling wind and rain,” he seemed upbeat: “I haven’t had a sleepover quite like it since I was a kid.

Branson wasn’t the only billionaire with Irma property woes.

He also has a holiday home, the 11-bedroom beachfront villa Le Chateau des Palmiers on the island of St Martin, which was pummelled on Wednesday, local time.

Hurricane Irma: devastation in the Caribbean