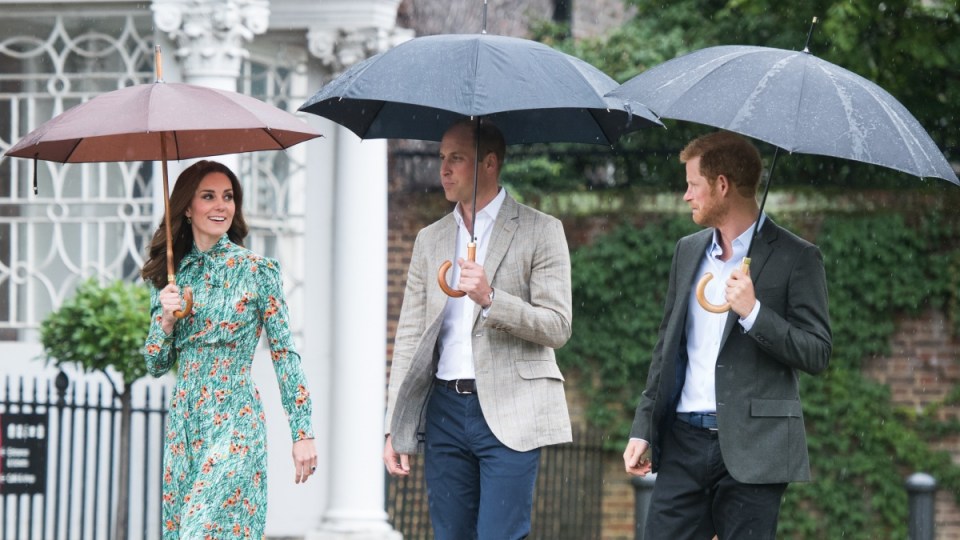 Thanks, team: the Duke and Duchess of Cambridge with Prince Harry at Kensington Palace on August 30.

As Prince Harry himself admitted to the world in June, nobody wants to be on the British throne.

“We are not doing this for ourselves, but for the greater good of the people,” he told Newsweek magazine of his family’s restricted job choices.

“Is there any one of the royal family who wants to be King or Queen?

“I don’t think so, but we will carry out our duties at the right time.”

Fabulous news for Harry, then, that his duties – and chance of having to rule – have become less heavy with the news the Duke and Duchess of Cambridge are expecting their third baby.

Certainly, the prince seemed thrilled with the happy news, which Buckingham Palace announced after Kate was forced to cancel an engagement because of extreme morning sickness.

And asked how the duchess is coping with her debilitating condition, he said: “I think she’s okay.”

In fact, Harry, 32, is probably hoping she’s more than okay. He might have his fingers crossed that Kate, 35, has twins.

The impending arrival – Kensington Palace has made no comment on when the baby is due, but basic maths puts it around April or May – moves Prince Harry further down in the line of succession.

Before Prince William, 35, became a father with the birth of Prince George, Harry was third behind his brother and father Prince Charles, 68.

George, 4, and Charlotte, 2, shunted him out of position, and the baby will move him even further down the pecking order to number six.

The significance is that he’s inching closer to the point where, in royal terms, he almost becomes a normal person.

The Succession to the Crown Act 2013 says the first six people in line to the throne must seek the monarch’s permission before marrying.

If Kate has twins, Harry will be able to skip the formality of having to ask his grandmother if she’s fine with her adult grandson taking a bride of his choice.

Given leading UK bookies have closed their books on him proposing to Suits actress Meghan Markle, the new royal baby likely takes the pressure off Harry.

As he told Newsweek, he has longed more than once to be something other than Prince Harry.

But he also said he is conscious his status gives him “a smallish window” when he can use his profile for good, before William’s kids take over.

“And I’ve got to make the most of it,” he said in the interview at Kensington Palace.

Harry sparked renewed speculation he and Markle, 36, will soon announce their engagement when he whisked her off on an African safari holiday in August.

If she weds her boyfriend of a year, the UN Women advocate – a divorcee who spoke out recently on racial vilification she experienced growing up with an African-American mother – would reportedly be known as HRH Princess Henry of Wales.

The expectation is the Queen would make Harry a duke as a wedding present, with Sussex the hot tip as a title.

And then if he does have children, Harry told Newsweek they would have an ordinary life.

“Even if I was King, I would do my own shopping. But it’s a tricky balancing act. We don’t want to dilute the magic.”

Why Prince Harry might be hoping Kate and William have twins