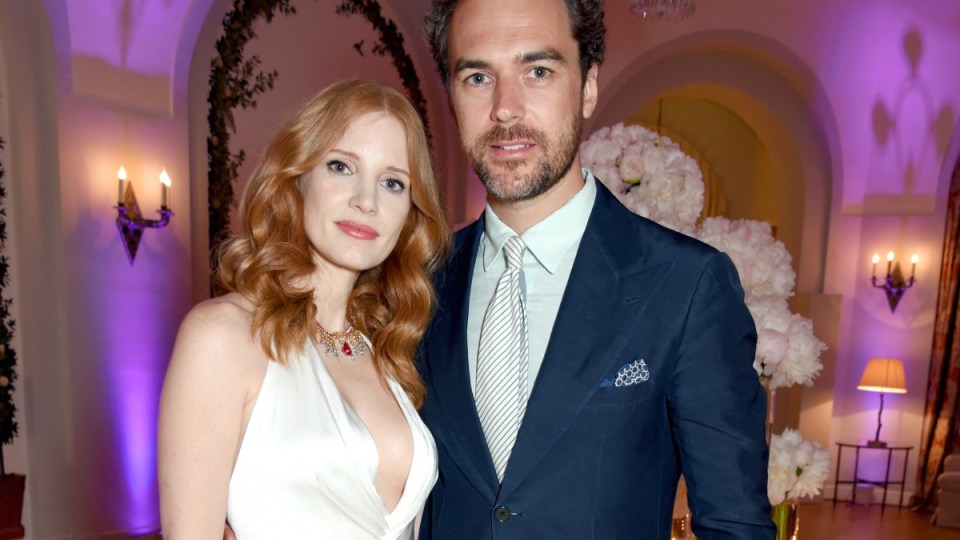 If Jessica Chastain and her husband (pictured right) had hoped for privacy at their wedding they would be sorely disappointed. Photo: Getty

When Oscar-nominated actress Jessica Chastain married her long-time partner in a secluded spot in Italy at the weekend, she probably didn’t expect the ceremony to be gatecrashed by photographers in helicopters.

While the 40-year-old star managed to keep her engagement to Italian noble Gian Luca Passi de Preposulo, 34, entirely under wraps, she didn’t have the same luck with her June 10 nuptials in Treviso, Veneto.

Paparazzi managed to capture the entire outdoor ceremony from above, using drone technology to snap Chastain and her fashion executive husband saying their vows at his family’s private estate, Villa Tiepolo Passi.

Photos of the ceremony published by the Daily Mail show the majority of attendees staring not at the bride, but at the unwanted visitors hovering above their heads.

Guests, including Hollywood actresses Anne Hathaway and Emily Blunt, could be seen glaring at the not-so-hidden cameras, with even Chastain breaking focus at one point to look up.

The overwhelming reaction to the cameras was one of disdain, with guests visibly disgusted by the rude interruption to one of life’s most intimate occasions.

Chastain took to Twitter to ask her fans not to share photos of the ceremony due to the nature in which they were taken.

“Thank you for all the sweet comments about my wedding. I love you and it was a beautiful day. I am going to ask you to please stop sharing the photos. Helicopters disregarded a no-fly zone and took those pics during the ceremony,” she wrote.

“Every time I see them I’m reminded of the insensitivity of that moment. I promise that I will share pics with you in the future, but I would prefer to share photos that celebrate love, not intrusion. I’m off social media for a few weeks. Much love and happiness to all of you.”

Did you hear? Im off the market 😉
Gianluca & I got married! We wanted privacy & aren't selling photos but Ill post something in the future ❤ pic.twitter.com/5VnM9qHaMX

Online commenters expressed sympathy for Chastain, suggesting her special day had been “ruined”.

“The photo of her looking straight at the drone on her wedding day… SAD,” one person commented.

“Looks like the pap of these photos was ruining everybody’s day. Look at how distracted the bride and the guests look . Poor girl,” another said.

Photos of celebrity weddings are hot property in the entertainment media world, but rarely do photographers manage to capture – or interrupt – the actual ceremony.

This is mainly because many celebrities find ways to satisfy the public interest in them while maintaining an ounce of privacy.

Pippa Middleton happily posed for waiting photographers outside the church post-ceremony, while George and Amal Clooney sold their official wedding photos to Hello! magazine, giving the money to charity.

But Chastain, who has been dating Passi de Preposulo since 2012, is particularly private when it comes to her personal life – she has spoken in the past about not dating actors in order to maintain a low profile off-camera.

The actress, who was nominated for an Oscar for her role in 2012’s Zero Dark Thirty, has only spoken publicly about Passi de Preposulo a handful of times.

“He’s a gentleman,” Chastain told W Magazine in 2015. “And that’s very important to me. He’s from an old-school Italian family. No one in his family has ever been divorced!”