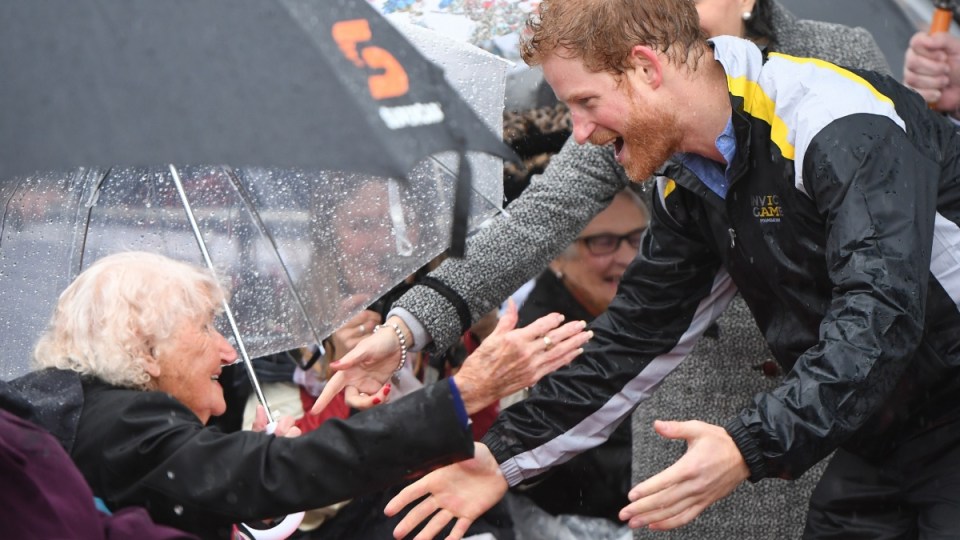 Prince Harry greets one of his more senior fans in Sydney. Photo: AAP

With rain pelting down on Sydney Harbour behind him, Prince Harry got down to business launching the countdown to the 2018 Invictus Games on Wednesday.

The prince mixed generic observations (“We can all benefit from positive and inspiring stories”) with personal anecdotes, voicing his feelings when he was forced to retire as a frontline army officer in 2008: “The guilt at having to leave my guys behind was hard to swallow.”

He said trying to find his own new normality when he returned to the UK from Afghanistan inspired him to start the event for wounded armed services veterans in 2014.

“Sport would make these guys and girls rebuild their lives,” said Harry, giving a nod to the local crowd. “As Australians know better than anyone, sport has an unparalleled ability to bring people together.”

Harry did just that, drawing crowds in Sydney during a first-day itinerary that included a boat race, a Circular Quay meet-and-greet with hopefuls for the Australian Invictus team and a private event at the Overseas Passenger Terminal.

Much of it was done as drenched fans waited under umbrellas, prompting a Sky News reporter to say: “You’ve really got to love Prince Harry to come out in this”.

Truth is, the fifth-in-line could recite the most boring bits from a flatpack furniture manual and still draw rave reviews.

Just met Prince Harry!!! 🇬🇧💂😍❤️😍💂🇬🇧 He's just as wonderful, kind, and easy to talk to as his brother. I'm still on cloud 9! I just wish it hadn't been POURING with rain and I'd thought to take my damn hood off, hah #PrinceHarry #PrinceHarryofWales #HenryCharlesAlbertDavid #HarryinSydney #royalty #monarchy #RoyalFamily #BritishRoyalFamily @kensingtonroyal @theroyalfamily

Harry analysed his own appeal in 2016: “What you see is what you get with me. It’s genuine. I will always try and bring an element of fun and happiness to everything I do. That probably is subconsciously very much a part of my mother.”

Whatever humanity and charm he inherited from Princess Diana, it has kicked in.

Formerly regarded as the party prince and a royal to be kept on a short rein – his well-thumbed list of improprieties include smoking joints at 17, wearing a Nazi uniform to a costume party and playing a naked game of pool in Vegas – Harry is now a royal workhorse with a palace-sanctioned licence to say whatever he likes.

The sight of him, at age 12, walking behind Diana’s coffin hurt hearts and virtually guaranteed the motherless boy would always have a sympathetic hearing, but he knows his thirties are being played out in a world of internet brutality where coasting on traditions of privilege and blue blood are not enough.

“I need to earn more respect from a lot more people,” he admitted last year.

Unlike the Duke and Duchess of Cambridge, “Harry has less of a defined role”, said Joe Little, managing editor of Majesty magazine. “But what he has done has been incredibly successful of late.”

These days, he hardly swings his polo mallet unless it’s to raise money for charity – he did just that in Singapore on Monday, with Downton Abbey star Joanne Froggatt cheering him on – and in the last couple of years has been publicly tested for HIV more than he’s been snapped falling out of clubs.

Since July last year, he has also gotten away with something his father Charles wouldn’t have: giving an actress and divorcee an access-all-areas pass to Kensington Palace, and fiercely defending her with the palace’s blessing against racist and other slurs.

UK bookies have suspended bets on Harry proposing to Meghan Markle, 35, who combines her role on TV legal drama Suits with being a UN Women Advocate and writing about both her favourite booze and personal hygiene products.

How does he get away with his anti-cookie-cutter choice? “If Harry loves someone,” royals author Ingrid Seward said in October, “I really feel that the royal family would embrace her, whoever she is.”

All of Sydney agrees, Harry is a prince of a guy