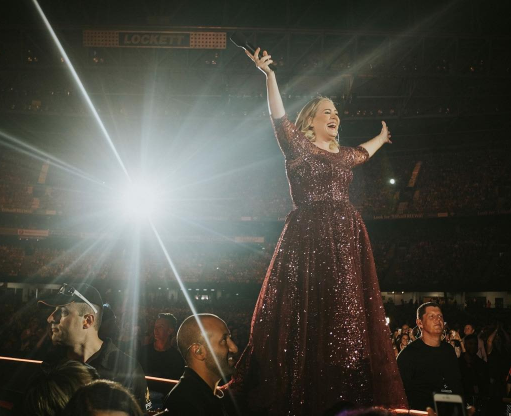 "I had no idea that was going to happen": Adele. Photo: Instagram.

Adele saved the best for last in the final concert of her Australian tour on Sunday, in which a record crowd was treated to a moving gesture of love.

As a gift to fans, Adele usually puts personally signed letters on some of the seats in the venue.

But the singer admitted she had fallen asleep that afternoon and hadn’t had a chance to write the letters this time. Instead, she invited one of the crowd up onto the stage at the second and final Melbourne concert.

After having seen Chris, 37, in the crowd burst into tears when she walked past him during her opening number, Hello, she decided it would be him whom she invited to the stage.

But not even Adele could predict what would happen next.

Chris proceeded to bring partner Wade with him. No sooner were they both on stage when Wade got down on one knee and proposed to Chris in front of more than 77,000 fans who cheered when Chris accepted.

Adele said afterwards that she had no idea about the proposal.

She then commented on the engagement ring, noting: “Oh, that is sharp”.

Adele’s two concerts at Etihad, which attracted around 75,000 and 77,000 people, are the biggest crowds at the venue since it opened in March 2000.

And on Monday Adele did what any other British backpacker does when they come to Melbourne — visit the set of Neighbours.

She posted a picture on Instagram of herself in Pin Oak Court, Vermont South, the street where Neighbours is filmed, captioned: “Neighhhhbours, should be there for one anotherrrr. That’s when good neighhhbours become goood friennnds”.

Adele helps fan to propose to partner in front of 77,000 people