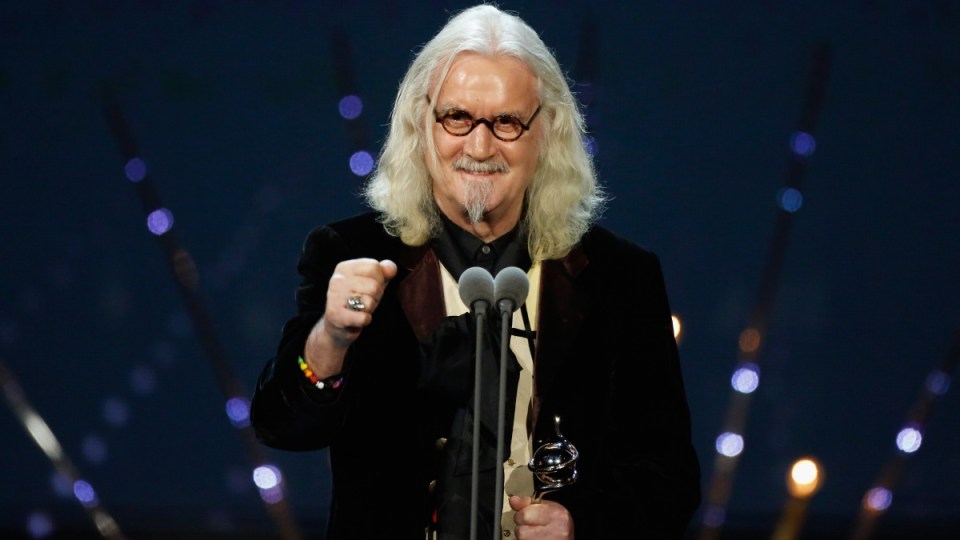 The Scottish comedian looks dramatically different from this public appearance one year ago. Photo: Getty

Scottish comedian Billy Connolly has made a rare public appearance looking vastly different in a new charity video, after stepping back from the spotlight to battle both cancer and Parkinson’s Disease.

The 74-year-old funnyman appeared pale, gaunt and subdued in a video calling for donations to Comic Relief’s Red Nose Day, in support of Alzheimer’s and dementia research.

“Hello, Billy Connolly here asking for your cash,” he says to the camera.

“Not for me obviously. I’ve got cancer and Parkinson’s and I definitely need a hair cut, but no,” he added, proving he had retained the sense of humour that made him famous.

Connolly introduces three people whose lives have been affected by dementia and Alzheimer’s, calling for donations to the UK charity.

He then introduces himself to those unfamiliar with his work as, “the hilarious comedian with a weird beard who once took off all my clothes for comic relief”.

“But that’s not what matters,” he concludes. “What matters is you tonight at home and this amazing power to completely change someone’s life.

“Billy Connolly, over and out,” he concludes.

Those who watched the video were moved by Connolly’s sincere words as well as his changing looks.

“Can’t get over how unwell Billy Connolly looks,” one Twitter user said.

“Just about crying on the train at the Billy Connolly Comic Relief video. So sad to see but what a man he is,” another wrote.

“Bless you Billy! You have brought so much joy to this planet I hope you kept a little for yourself. Please don’t ever leave us we need you more than ever now,” a viewer on YouTube commented.

The father of five has been open about his struggles with both illnesses.

He was diagnosed with Parkinson’s in 2013 after an Australian fan who happened to be a doctor spotted him in a hotel lobby and advised him to seek medical advice for his “strange gait”.

“He said, ‘I’m a surgeon and I have been watching you walking, you have a strange gait’,” Connolly told a US radio show.

Just hours after Connolly was diagnosed with the degenerative disease he was told he had prostate cancer. He received treatment for the cancer soon after and was given the all-clear later that year.

However, his video appearance suggests the illness may be plaguing him once again.

In an April 2016 interview, the comedian admitted he’d had suicidal thoughts since the Parkinson’s diagnosis.

Robin Williams, a good friend of Connolly’s, is believed to have taken his own life after receiving the same diagnosis.

“I’m okay at the moment but it comes and goes,” Connolly said.

“Turning from one side to the other can be quite a complicated manoeuvre. The body isn’t responding sometimes but it is quite interesting as the body changes.

“I have started to drool as well, that’s a nice thing. That’s going to make me really attractive.”

Connolly has been married to his wife, psychologist Pamela Stephenson, for 28 years.

They have three children together – Scarlett, Amy and Daisy – and Connolly has two children – Jamie and Cara – from his previous marriage to interior designer Iris Pressagh.