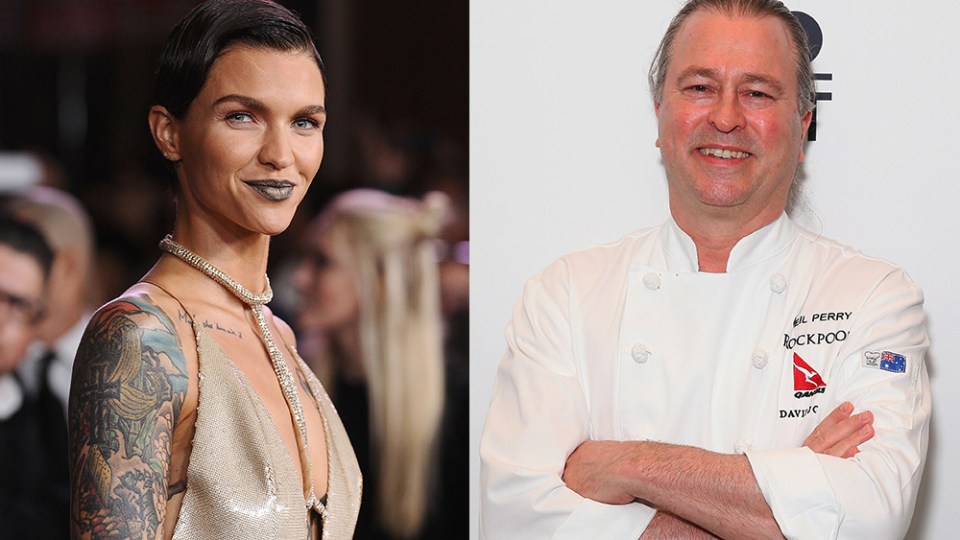 What do a Hollywood starlet and a top chef have in common? A cockroach, apparently. Photo: Getty

Rose, a former local TV host who is climbing up the ranks in Hollywood, has accused Mr Markson of leaking a story to the media without her permission about a recent dining disaster she had at one of Perry’s restaurants.

Mr Markson, in turn, has denied leaking the story, telling The New Daily he is “an enormous fan and admirer of Ruby Rose and Neil Perry”.

Rose and girlfriend Jess Origlasso, of music duo The Veronicas, were dining at Perry’s feted Sydney restaurant Spice Temple on Monday night when they discovered what appeared to be a “cooked cockroach” in their meal.

A “mortified” Perry spoke to the Daily Telegraph about the incident, revealing the pair, who are both vegan, were not charged for the dish and were given plenty of freebies in compensation.

“This is the first time I have ever seen anything like this in 42 years,” Perry said.

“Especially at Spice Temple, it is one of the cleanest kitchens you will ever find anywhere in the world, so I am struggling to figure out how this could have possibly happened. But apparently it did and I am aware the meal was taken away immediately.

“It was comped (made complimentary) and we brought them out all sorts of other things,” he told the paper.

Rose, who is in Australia to promote a selfie camera, was quick to defend Perry on Thursday, tweeting, ‘I love Neil and I ate at Rosetta’s [Perry’s Melbourne Italian restaurant] last night’.

“I’m more traumatised that this has been printed than I was about the cockroach,” she added.

The 30-year-old star even promised to send Perry “the biggest bunch of flowers” to apologise for the unplanned negative publicity.

She then turned on Mr Markson after he tweeted out a version of the story, accusing him of spilling the beans.

“Really Max? I’m already investigating who leaked this and it could only be your team… not ok,” Rose wrote in response to Mr Markson’s missive.

@maxmarkson @Jessicaveronica @seanneylon Really Max? I'm already investigating who leaked this and it could only be your team… not ok.

Rose told Fairfax Media she was only working with Mr Markson, who runs publicity company Markson Sparks, for the launch of the camera, adding “he wouldn’t last a day with me” for her personal publicity.

“Max was the event publicist … great event for an awesome client and they seemed thrilled. But that’s it,” she tweeted.

In an emailed statement to The New Daily, Mr Markson praised Rose for her hard work and professionalism.

“Ruby has worked tirelessly this week promoting the ROVA flying selfie camera and has been incredibly professional, punctual and an amazing ambassador in all her activities and interviews.”

He added: “Like Ruby, I eat at Neil’s restaurants in Sydney and Melbourne, and my personal favourite dish is the mushy peas with slow cooked egg that he serves at Rockpool at Crown Melbourne … I love his food!”