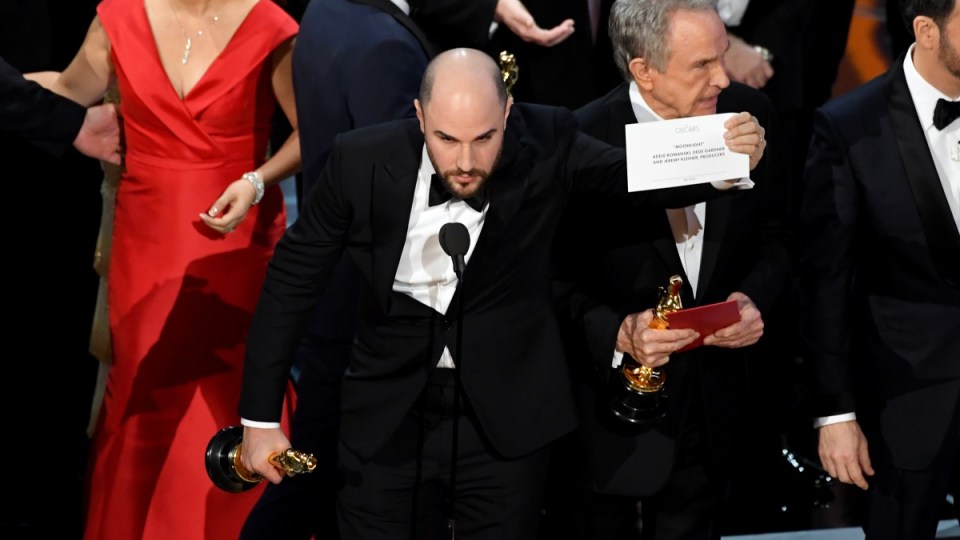 The Academy Awards were mere minutes from ending when a blunder of epic proportions derailed the show, with presenters Warren Beatty and Faye Dunaway reading out the wrong winner for Best Picture.

The cast and crew of La La Land were interrupted mid-celebration when the show’s producers realised a monumental error had been made.

“Moonlight, you guys won Best Picture. This is not a joke.”

Horowitz then held up the winning envelope which bore the words ‘Best Picture – Moonlight’ as evidence. 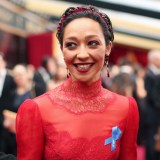 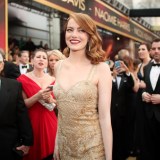 “This is not a joke. I’m afraid they read the wrong thing,” an unidentified man added.

Beatty returned to the microphone to explain he had been handed the wrong envelope and had been trying to figure out what was going on when Dunaway jumped in and read the wrong name.

“I want to tell you what happened. I opened the envelope. And it said ‘Emma Stone, La La Land’. That’s why I took such a long look at Faye and at you. I wasn’t trying to be funny,” Beatty said.

The ceremony’s host Jimmy Kimmel joked: “I knew I would screw this show up. I really did.”

La La Land was the hot favourite to win the award, so Moonlight’s victory was a massive upset.

Watch the awkward moment below

WAIT WHAT IS HAPPENING #Oscars pic.twitter.com/4C6QkMm55H

Upon closer inspection, shots of Beatty right before the award was announced revealed he was, in fact, holding the envelope for Best Actress in a Leading Role.

Those on social media were quick to identify the culprit, with many blaming Leonardo DiCaprio, the man last spotted with the offending envelope.

Others speculated the whole thing was a set-up designed to generate publicity for the awards show.

In the end Price Waterhouse Coopers – the accounting firm tasked with compiling the Oscars votes – apologised and took responsibility for the mix up.

Wait, Leo never gave Emma Stone the envelope when she won for Best Actress….so is this whole #LaLaLand mishap his fault?! 🤔😂 #Oscars pic.twitter.com/mMZ4xVYUMF

Fences star Viola Davis won Best Supporting Actress and gave a tearful speech thanking her parents: “The people who taught me good or bad, how to fail, how to love, how to hold an award, how to lose.”

Kimmel joked Davis had already been nominated for an Emmy for the speech.

Viola Davis won an Oscar and gave an amazing speech; no one is surprised #Oscars https://t.co/Q3g6O29lz1 pic.twitter.com/boWYSWY1LY

Best Actor: Casey Affleck for Manchester by the Sea

Best Costume: Colleen Atwood Fantastic Beasts and Where to Find Them

Best Original Screenplay: Manchester by the Sea by Kenneth Lonergan

Aside from that brief moment of confusion, late night TV host Jimmy Kimmel was widely commended for his hosting abilities, particularly his hilarious opening monologue.

“It has been an amazing year for movies, black people saved NASA and white people saved jazz. That is what you call progress,” he joked of nominated films Hidden Figures and La La Land as part of a politically charged series of jokes.

A handful of the jokes targeted controversial Hacksaw Ridge director Mel Gibson for his past racist comments.

Kimmel said he felt pressure to stand up and unite America during such a tumultuous time, but joked: “There is only one Braveheart in this room and he is not going to unite us either, OK?”

Mel Gibson looks like a villain who just stole candy from a child #Oscars pic.twitter.com/T1lz3tdoyg

Finally, Kimmel had many in the audience in stitches with his “tribute” to Meryl Streep, poking fun at Donald Trump’s appraisal of her as “overrated”.

“Of all the great actors here in Hollywood, one in particular has stood the test of time for her uninspiring and overrated performances,” Kimmel said.

“May I say from her mediocre early work in The Deer Hunter and Out of Africa and Kramer Vs Kramer, Streep has phoned it in for more than 50 films.”

“Nice dress by the way,” Kimmel concluded, “Is that an Ivanka?”

So much love from @jimmykimmel at the #Oscars for Meryl Streep. pic.twitter.com/tO1NxzelOH

Oscars blunder: ‘I’m sorry, there’s a mistake. This is not a joke’