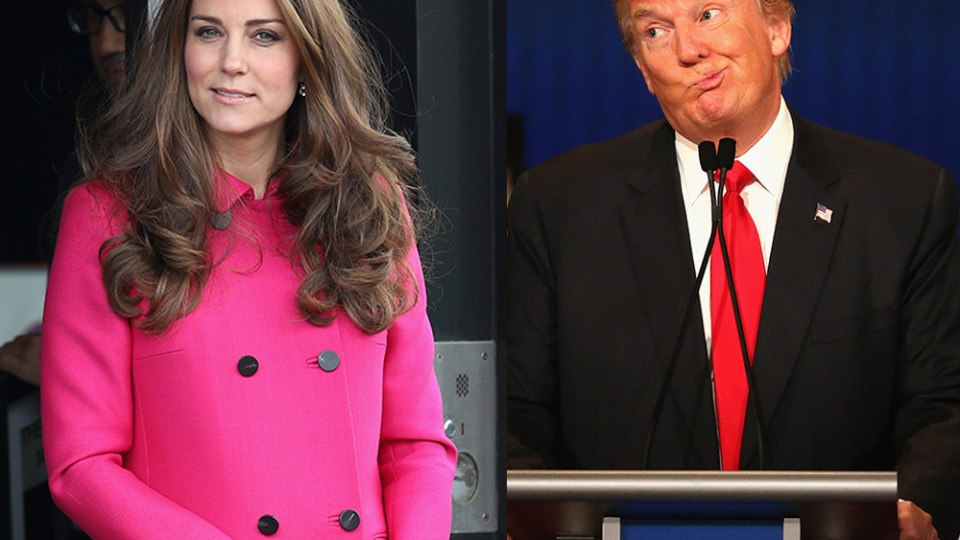 A 2012 tweet from United States President Donald Trump about Kate Middleton, Duchess of Cambridge, sunbathing topless has resurfaced online as opposition to Mr Trump’s upcoming visit to the UK grows.

Mr Trump took to the social media platform to air his views when Ms Middleton was photographed half-naked without her consent while holidaying in France.

At the time, UK publications refused to run the photos but a French magazine published them, prompting the Duke and Duchess to issue a statement calling the invasion of privacy “grotesque and unjustifiable”.

However, Mr Trump took a different view at the time, tweeting: “Who wouldn’t take Kate’s picture and make lots of money if she does the nude sunbathing thing. Come on Kate!”

Mr Trump also wrote a second tweet saying the Duchess had “only herself to blame” for the photos.

Who wouldn't take Kate's picture and make lots of money if she does the nude sunbathing thing. Come on Kate!

Kate Middleton is great–but she shouldn't be sunbathing in the nude–only herself to blame.

The British royal family has long had a strained relationship with the paparazzi since Princess Diana’s death in a car crash in France with photographers in pursuit.

The tweet has resurfaced at the same time as a petition calling for Mr Trump’s state visit to the United Kingdom be cancelled is attracting massive support.

The petition, titled ‘Prevent Donald Trump from making a State Visit to the United Kingdom‘, appears on the UK Parliament website and has attracted more than 1.7 million signatures.

One of the main reasons cited for banning Mr Trump’s visit is that it “would cause embarrassment to Her Majesty the Queen” due to his “well documented misogyny and vulgarity”.

British lawmakers will debate the visit on February 20, even though Prime Minister Theresa May is adamant the visit will go ahead.

Trump possible visit to the UK not viewed favorably. Trump likely to be received with massive protests.

On the same day, lawmakers will also debate a second petition calling for the state visit to go ahead, which has been signed by more than 130,000 people.

The British government responds to all petitions that gain more than 10,000 signatures and topics are considered for parliamentary debate if they reach 100,000.

London’s Muslim mayor Sadiq Khan has also called for the President’s state visit to the UK to be cancelled, saying while the ban is in place Britain should not be rolling out the red carpet for President Trump.

He told the Evening Standard that he’d tried to avoid criticising Mr Trump, but “in the aftermath of his shameful and cruel ban on immigrants and refugees … I have no choice but to speak out.”

Past controversy over royals

Mr Trump has in the past made a handful of controversial comments about the British royal family.

In a 1997 interview with Howard Stern soon after Princess Diana’s death, Mr Trump implied he would have been able to have sex with the late Princess of Wales.

“Why do people think it’s egotistical of you to say you could’ve gotten with Lady Di? You couldn’t gotten her, right? You could’ve nailed her,” Mr Stern said.

“I think I could have,” Mr Trump responded.

The petition against Mr Trump’s visit has received well over the 100,000 signatures required to be considered in parliament, but British Prime Minister Theresa May said in a press conference she stood by her invitation.

Mrs May’s stance has generated outrage from British people, many of whom took to the streets of major cities to protest Mr Trump’s controversial “Muslim ban”.

The so-called Muslim ban pertains to an executive order Mr Trump signed on Friday (US time) that temporarily suspends travel to the US from seven majority-Muslim countries.

Mrs May was the first international politician to meet with Mr Trump last week, but issued a statement through a spokesperson following the signing of the executive order saying “we do not agree with this kind of approach”.

“We are studying this new executive order to see what it means and what the legal effects are, and in particular, what the consequences are for UK nationals,” the spokesperson said.

“If there is any impact on UK nationals then clearly we will make representations to the US government about that.”

Labour leader Jeremy Corbyn, however, urged Mrs May to reconsider her invitation to Mr Trump, writing in a letter: “This world defeated segregation, we defeated apartheid and we will defeat this nasty policy created to sow division and hatred.

“His invite should be withdrawn until the executive orders are gone and every element of them repealed.”