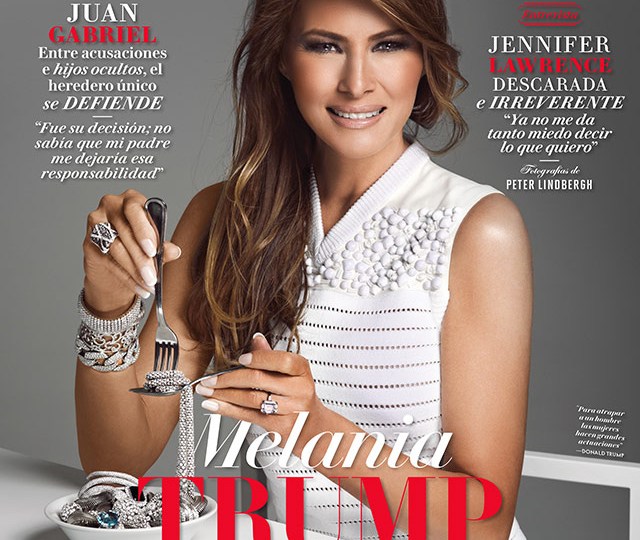 The cover of the magazine’s February issue shows Mrs Trump pretending to eat a plate of diamond necklaces like spaghetti, with the cover line: “Her family background, the tactics to deal with her husband and how she plans to become the new Jackie Kennedy.”

Prominent Mexicans have expressed anger over the decision, describing it as “out of touch” and “insensitive” given current tensions between the United States and Mexico.

“It’s a lack of sensitivity on the part of the publisher,” Mexican author Guadalupe Loaeza told The Guardian. “I started reading this and I couldn’t finish. I didn’t want to know anything about the wife of our country’s No 1 enemy.”

Mexican political analyst Denise Dresser took to Twitter to comment on the cover, sarcastically writing it was a “great example of sensitivity, empathy, patriotism and editorial intelligence”.

Many felt the image of Mrs Trump dining on opulent jewellery was “tasteless” and provided a stark contrast to Mexico’s socioeconomic climate.

Some commenters even called for a boycott of the magazine.

Next item to boycott are all @VanityFair magazines. There is no interest for any company who praises an illegitimate @potus & his family

@VanityFairMX very tasteless to put Melania Trump on the cover of VF magazine. W/. so many Mexicans living in poverty, isn't that insulting?

Melania #Trump on cover Vanity Fair Mexico with a bowl full of jewelry
Really?
Could this administration be any more out of touch https://t.co/zzTQZ22GQ6

Mexican LGBT activist Alex Orué criticised Vanity Fair for “deciding to normalise the Trumps with your readers,” despite the magazine having the opportunity to “highlight the cultural and social life of Mexico”.

However, Vanity Fair Mexico’s editor-in-chief Lourdes Garcon responded to Mr Orué, saying the magazine’s intention was “quite the opposite”.

“I encourage you to read the text,” she wrote.

Nothing says 'FOR THE ORDINARY FOLKS,' quite like eating a bowl of jewellery #MELANIATRUMP @VanityFair pic.twitter.com/JEuOPdeJqH

The profile in question first ran in US GQ magazine in April 2016 and was written by Russian-American journalist Julia Ioffe.

The original piece featured comment from people who knew Mrs Trump when she was living in Slovenia who described her as “not especially clever”.

After it was first published, Ms Ioffe became the target of vitriolic anti-Semitic threats from Mr Trump’s supporters who felt the article was too critical of Mrs Trump.

President Nieto made the bold move in response to Mr Trump signing executive orders pertaining to the construction of a border wall and the increased deportation of undocumented Mexican immigrants.

There has also been debate over which country should pay for the wall, with the White House claiming Mr Trump would consider imposing a 20 per cent tax on Mexican imports to cover the cost of the southern wall.

However, the two leaders managed to proceed with bilateral negotiations in a phone conversation on Friday (US time).

Mexico has taken advantage of the U.S. for long enough. Massive trade deficits & little help on the very weak border must change, NOW!

In a joint statement, Presidents Trump and Nieto said: “With respect to payment for the border wall, both presidents recognised their clear and very public differences in their stances on this very sensitive issue, and agreed to solve these differences as part of a comprehensive discussion of all aspects of the bilateral relationship.”

The statement from Mr Nieto’s office also added: “The presidents also agreed for now not to speak publicly about this controversial issue.”

Author Salman Rushdie stabbed in the neck by masked assailant on stage
Melbourne society icon Lillian Frank dead at 92
Foreign Minister Penny Wong vows to keep working to free Aussie journo Cheng Lei from Chinese jail
Cameron Smith and fellow Aussies in the thick of it at PGA’s Memphis tournament
Taiwan thanks US for maintaining regional security in the face of Beijing’s bullying
Ex-Liberal staffer: Survivors weren’t asked about their ordeals in NSW parliament
The serious side of ‘America’s sweetheart’ Mary Tyler Moore
Today's Stories