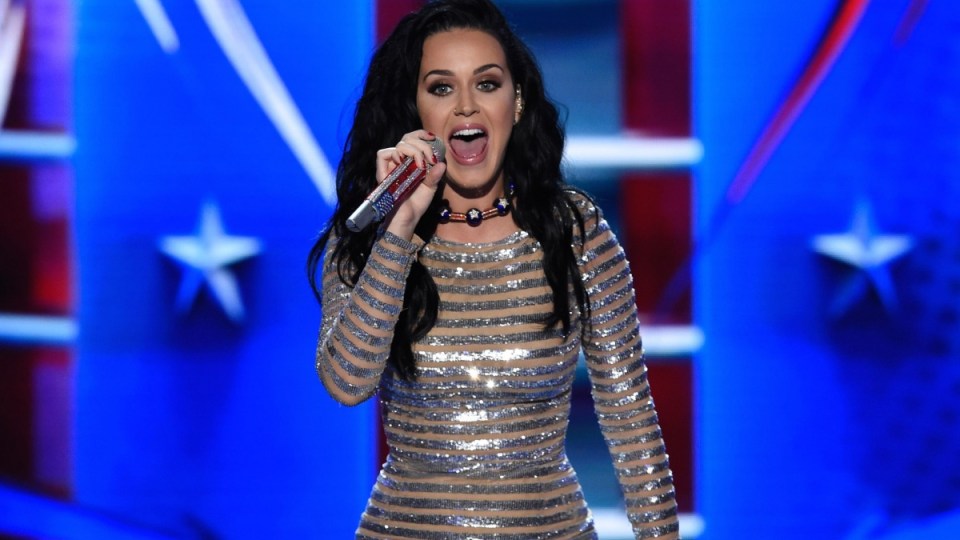 Katy Perry is stripping off to get young people to vote. Photo: Getty

Pop star Katy Perry is taking drastic measures to encourage Americans to support Hillary Clinton by promising to “vote naked” in the upcoming US presidential election.

The 31-year-old singer announced the daring stunt on her Instagram page, with a blurred photo of herself in the buff.

“Tomorrow, I use my body as click bait to help change the world,” Perry captioned the photo.

TOMORROW, I USE MY BODY AS CLICK BAIT TO HELP CHANGE THE WORLD 👊🏼

She followed it up with a video on American humour site Funny Or Die encouraging people to “roll out of bed and come to the polls in whatever state you woke up in” because, “this year, you can look like s**t when you vote”.

Today, on #VoterRegistrationDay, I, @funnyordie and @rockthevote invite you to… CLICK ON THE LINK IN MY PROFILE #IRegistered

In the video, Perry showcases the different things you can wear to vote in, from a onesie to an old t-shirt.

“Or, if you’re like me, I sleep naked,” Perry says in the clip, before stripping off.

Perry is an ardent Clinton supporter and Democrat who joined the former US Secretary of State on the campaign trail and performed at this year’s Democratic National Convention.

“Both of my parents are pastors and staunch Republicans,” she said in her DNC speech.

“I didn’t finish high school, and unfortunately I don’t have a formal education. But I do have an open mind and I have a voice.

“I’m asking you to have an open mind and to use your voice, because on November 8, you’ll be just as powerful as any NRA lobbyist,” Perry said.

“You’ll have as much say as any billionaire. Or you can just cancel out your weird cousin’s vote, if you’d like.”

Or – you can make like Katy and let your naked body do the talking.

Ahead of her eye-grabbing stunt, which is set to occur on Wednesday local time (Thursday AEST), Perry live-tweeted the presidential debate.

“This is like watching a frog sitting in water that is boiling slowly,” she said of Clinton’s opponent Donald Trump.

As for Clinton, Perry tweeted: “She’s smiling with ease cause #shesgotthis.”

Perry is just one of the many celebrities supporting Clinton at public events and on social media with the hashtag #ImWithHer.

Fellow singer Miley Cyrus also posted on Instagram in support of Clinton, adding that she was “f***ing scared” about the prospect of Trump in power.

Lena Dunham, Meryl Streep, Lady Gaga, Bette Midler, Amy Schumer and – of course – Barack and Michelle Obama have also been vocal in their support of Clinton.

Y'all watching those dem debates? I predict major slayage from a certain someone… WATCH, get informed about the issues that matter to YOU and your COMMUNITY and then VOTE (sorry for all the CAPS, pretty worked up) #Debates2016