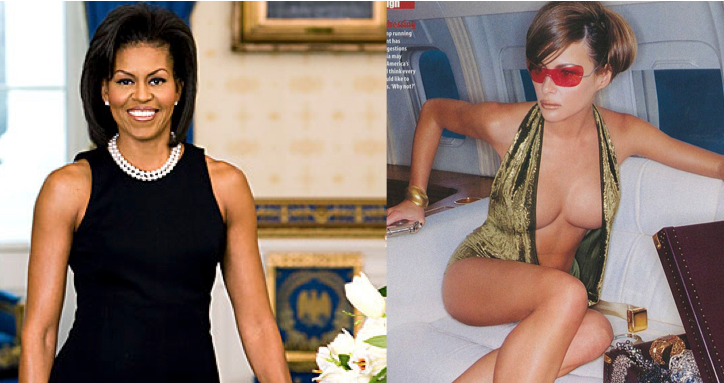 Not one but two steamy nude photo shoots featuring first lady in waiting Melania Trump have surfaced in the past few days – exposing the hypocrisy of the US right-wing media.

The first, published by tabloid The New York Post on Saturday, included a full-frontal nude shot of Donald Trump’s wife of 11 years, while the second was a lesbian-themed shoot showing her entangled in a nude tryst with a female model.

The images, although some are previously unseen, should not come as a shock to members of the public already aware of Melania Trump’s former life as a model.

Before she met the now-Republican presidential candidate at a Fashion Week party in 1998, Melania Trump was Melania Knauss, a 25-year-old glamour model with spreads in numerous men’s magazines.

Last year, men’s publication GQ republished an old Melania shoot after it became clear her husband was in with a real shot at the White House.

“Over 15 years ago we profiled Donald Trump’s then-girlfriend Melania Knauss. Now our naked profile shoot … makes for some interesting reading since his … run for president,” wrote the magazine.

The images obtained by The New York Post have inevitably been shared all over the internet, but it’s the commentary on the images which reveals the double standards of some media outlets.

While a number of publications have hammed up the sexy nature of the shoot, none have called into question Melania Trump’s appropriateness for the post of FLOTUS (First Lady of the United States).

It’s not suggested she should be at all shamed for her racy photo shoots – modelling was her profession after all – but compared with the experience of current FLOTUS, Michelle Obama, the saga reveals the hypocrisy of certain conservative media.

A right to bare arms

The response to Trump’s nude photos is nothing compared with the firestorm that erupted over Michelle Obama’s dress choices in 2009.

Soon after Barack Obama was elected to the White House in 2008, American media began reporting on the First Lady’s penchant for sleeveless dresses, starting with her first official portrait, first magazine cover and her husband’s first congress address.

The Huffington Post dubbed it “Michelle Obama’s Sleeveless Week”, complete with a gallery to illustrate the controversy and a reader poll.

At the time, the Chicago Tribune newspaper reported it had received hundreds of complaints about her choice to ‘bare arms’ – claiming it undermined the sense of occasion and was out of season (it was winter at the time).

“She’s kind of faced some criticism for that in the past where people have said maybe [her clothing is] distracting from the central point, from what is going on,” editor Wendy Donahue told ABC News.

In a podcast by National Public Radio, Virginia voter Bobbie Lusser claimed to summarise what Republican voters thought of Michelle Obama in 2012.

“I mean she’s more about showing her arms off. … I think that’s very inappropriate for a lot of functions that she goes to.”

Donald Trump has not commented on his wife’s images.