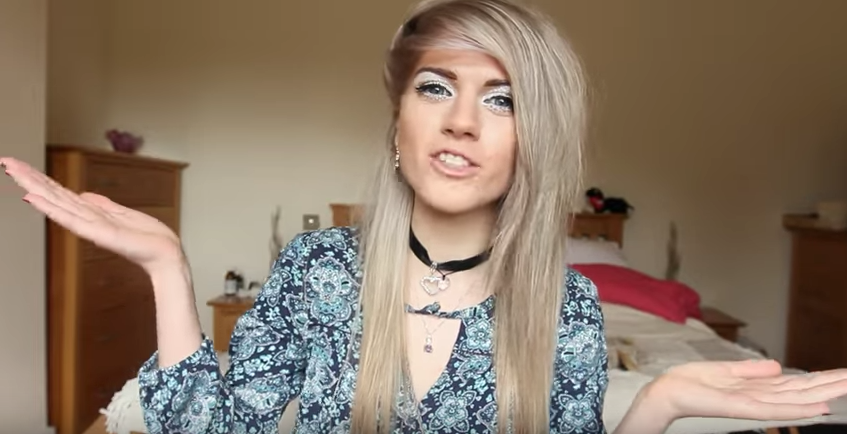 Many Joyce fans are still convinced she has been kidnapped. Photo: YouTube

Joyce, who has 600,000 YouTube subscribers, posted a bizarre event invite on Wednesday morning London time, telling fans to meet her for a “party” at 6.30am.

Coupled with her increasingly strange tweets and seemingly dilated pupils, viewers went into meltdown over the star’s wellbeing, and the hashtag #SaveMarinaJoyce began trending worldwide.

Meet me Bethnal Green at 6:30am if you would like to join partying with me at that event ^-^ bring a friend so you dont get lost

What began as the bizarre behaviour of one blogger quickly spiralled into a deluge of harmful conspiracies – including that Joyce’s body had been found by police.

Unfortunately, even a tweet from local police informing the public they had checked on Joyce, and a live video from Joyce herself, failed to convince fans she was OK.

As the 6.30am deadline for the ‘party’ approached, thousands of fans joined in on the speculation, many running with the theory that Joyce had been kidnapped by terror group Islamic State.

Many claimed she had whispered the words “help me” in a video from May, arguing she had posted the clip under duress. Others pointed to the disturbing bruises on her arms in a recent video.

According to the Mirror, hundreds of fans called the police to express concern.

A number of people appeared to be Periscoping (live video blogging) the 6.30am event in London’s Bethnal Green, with the pitch black footage including nothing but terrified screams.

It’s believed the videos were fake.

Many users posted ‘calming’ videos to each other, suggesting they would help with the anxiety fans were feeling.

Joyce has been known to blog about mental illness, offering tips to sufferers of depression and anxiety.

Joyce eventually posted a live stream to video site YouNow in an attempt to tell fans she was OK, but fans inevitably found more to be upset about.

In the video, Joyce trails off mid-sentence, begins to cough and looks frightened.

Dedicated followers are adamant that Joyce’s behaviour has changed dramatically since May – many suggesting the slight blonde appeared to be affected by drugs in a video posted last week.

The YouTube star appeared to be speaking very quickly and staring vacantly at the camera as she awkwardly plugged a clothing brand.

Fellow YouTuber Sam Pepper told his one million followers that Joyce had been battling a drug addiction.

Anyone who knows Marina Joyce personally knows she has a serious drug addiction. she needs help, but in the form of rehab #savemarinajoyce

drugs doesn't make it any less worse than the other "theories" she still needs help, it's not nice to see anyone suffer.

#savemarinajoyce there's literally CHAINS hanging out her shirt after she jumps u hear them in the damn video i cant pic.twitter.com/xbHVWH572y

Further fuelling the drug theory was a post allegedly from Joyce’s own mother.

A friend claimed to have messaged Joyce’s mother, asking whether the blogger was OK.

“Yes she goes out and yes there are issues, but I’ve got it under control,” her mother allegedly replied.