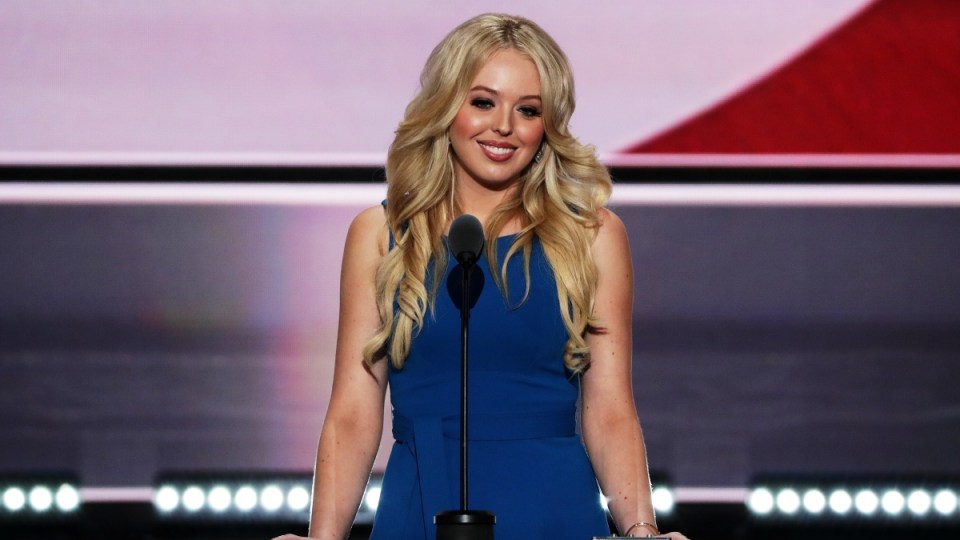 While Donald Trump’s three eldest children have played key roles in their father’s Presidential campaign, his youngest daughter Tiffany has remained in the shadows – until now.

On Wednesday (AEST), the 22-year-old took the stage at the Republican National Convention in Ohio to deliver a speech, inciting a massive social media reaction from many people unaware she even existed.

Unlike her half-siblings Donald Jnr, 38, Ivanka, 34 and Eric, 32, Tiffany has not been seen during the marathon race to the White House, nor does she work in any of her father’s corporations.

In her speech, Tiffany Trump acknowledged her absence from the campaign thus far.

“I’ve given a few speeches in front of classrooms and students, but never in an arena with more than 10 million people watching,” she said.

“But like my father, I never back down from challenges, so here I am, a little new to the convention scene, but incredibly honoured and very confident in the good man America is coming to know.”

So who exactly is Tiffany, the daughter many have dubbed “the silent one” in Trump’s highly-publicised campaign?

The child of a brief marriage

Tiffany is the only child of Trump and his ex-wife, television actress Marla Maples.

Despite being raised solely by her mother, Tiffany used her RNC speech to pay tribute to her father.

“I always looked forward to introducing him to my friends, especially the ones with preconceived notions, because they meet a man with natural charm and no facade,” the recent university graduate said.

Trump married Maples in 1993, with Tiffany being born in October that year. The pair divorced in 1999.

Their short union was always tainted by the fact it began in infidelity – Trump’s long affair with Maples was the catalyst for the breakdown of his marriage to Ivana Trump, mother to Donald Jnr, Ivanka and Eric.

In 1994, when Tiffany was just one, Trump was criticised for making inappropriate comments about her appearance during a television interview with Maples.

“Well, I think that she’s got a lot of Marla,” he said of his daughter’s appearance.

“She’s a really beautiful baby, and she’s got Marla’s legs. We don’t know whether she’s got this part yet [gesturing toward his chest], but time will tell.”

Tiffany’s backstory is an intriguing one that deviates from her siblings’. She once made a pop music single and has drawn comparisons to Miley Cyrus.

She’s also dabbled in modelling and interned at Vogue magazine – a gig she scored through half-sister Ivanka Trump.

Has anyone ever seen Tiffany Trump and Miley Cyrus in the same room at the same time? Doubt it.

In a 2011 interview with Oprah, Tiffany described her budding singing career as “more of a hobby”.

She graduated from the University of Pennsylvania, like her father, and double majored in sociology and urban studies, USA Today reported.

Donald Trump told People magazine she “got all A’s at Penn, so we’re proud of her”.

While Tiffany has attempted to forge her own way in the world, her siblings have stayed close to their father.

Donald Jnr is executive vice president of the Trump Organisation. He is a father of five, married to model Vanessa Haydon and was a delegate at the Republican National Convention.

Ivanka Trump is a former model and New York Times best-selling author. She is executive vice president of development and acquisitions for the Trump Organisation. She is married with three children.

The youngest of Donald Trump’s children with Ivana Trump, Eric, is a vice president in the Trump Organisation. He is married to a television producer and is known for being a leader in young philanthropic circles.

All three children have been “flexing their muscle” in Donald Trump’s campaign, according to the Wall Street Journal. They even helped sway their father to sack one of his key media advisors.

Barron Trump is the only child Donald Trump has with current wife Melania. He reportedly has his own floor in the Trump penthouse, but doesn’t have a nanny.